The probability of a candidate from the Green party becoming Germany’s next Chancellor has increased. This could change Europe’s policy mix, but remember that Germany will remain a consensus machine.

We are in the two most interesting weeks in German politics of the past 16 years. After many years of political stability, last week the two highest-polling parties nominated their candidates to succeed Angela Merkel.

For all practical purposes, this marks the beginning of the race for the Bundeskanzleramt – which in true Germanic style does not roll off the tongue as smoothly as the White House or the Élysée Palace.

Without an incumbent, there are two new faces making a first impression on voters: Annalena Baerbock for the Greens, and Armin Laschet for the CDU. Both are now receiving far more scrutiny than they have in their political lives so far.

This means that in the next two weeks, there is much more room for shifts in election odds than usual, before things settle down and the proper campaign starts after the summer.

Nevertheless, the first polls after the candidate announcements showed a big jump in support for the Greens, one even with a 7% lead over the CDU. I’m keenly waiting for more post-decision polls to clarify the picture, but this is surely the best start the Greens could have hoped for. All signs are pointing towards a head-to-head race between the CDU and Greens. 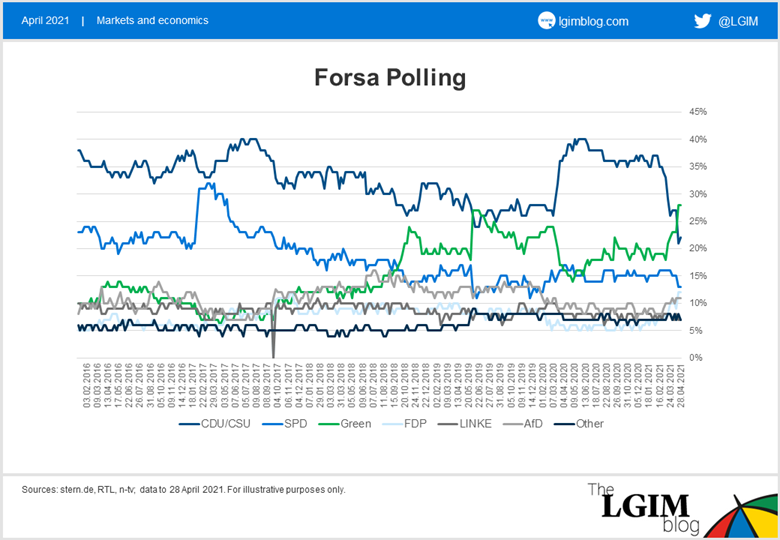 On the CDU side, Laschet is a continuity candidate. He is a somewhat surprising choice, as he polls poorly both within the party and across the country.

On the other hand, a Green Chancellor – though still not the most likely outcome based on current betting odds – would be a new step for Germany. The Greens have become more centrist over the years and Baerbock is a centrist within the party. Yet based on the Greens’ platform, we would still expect higher taxes, more fiscal spending, a more pro-EU approach, and accelerated climate policies.

The impact on the equity market of such a Green-led government would be likely to be moderate, as higher taxes would be offset by more fiscal spending. A stronger stance in favour of the EU would also be likely to be positive for markets. There could also be a boost to the decarbonisation theme in asset prices if the EU’s biggest economy was led by a Green government, but too few policy details are known at this stage to be more precise.

However, it is important to remember that Germany’s political system is a consensus machine where the process of coalition-building and the influence of the politically divided upper house makes big and quick policy shifts difficult and less likely, regardless of who is Chancellor.