Forecasting is an economist’s bread and butter so it would be strange to not have anything on the topic. For now, the macro outlook appears to be continued steady global growth supported by exceptionally loose monetary policy.

Here in the economics team, we find that it’s a useful discipline to kick the tires on our economic models each month.

As highlighted in ‘Global recovery – mirage or reality’, despite quarterly fluctuations, global growth has been remarkably steady over the last five years, aided by plenty of monetary policy support. Our Economics Roadmap forecasts suggest this regime could continue for a few more quarters. While this view is currently close to consensus among economists, our strategists still have to work out what this means for financial markets. 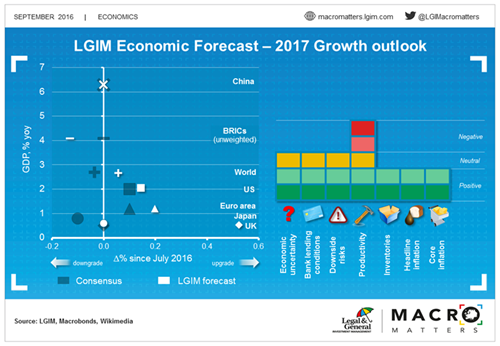 Economic uncertainty appears to have returned to normal following the Brexit shock and EM bank lending conditions have been aided by strong portfolio inflows into the region. This removes some of the downside risks, but growth is still likely to remain modest. With productivity appearing to downshift, this is sufficient to drive unemployment rates down further. We find global inventories are looking increasingly lean, but with sluggish global capex and global retail sales growth only around average, the global manufacturing improvement is likely to be unspectacular. Headline inflation is set to rise as energy base-effects unwind. The key test is whether this squeezes real incomes, keeping growth subdued but liquidity flowing, or if an increase in nominal wages signals a move to late cycle.

Looking at the country detail:

Increasing protectionism is an important medium-term risk which could undermine potential growth even further.

In terms of risks, we worry most about adverse political developments. Increasing protectionism is an important medium-term risk which could undermine potential growth even further. While it has not happened thus far, there are upside risks from low interest rates encouraging more borrowing and spending. On inflation we see the risks as balanced. Low inflation expectations could be self-fulfilling and commodity prices still remain relatively low. But we also feel that there is less labour market slack than some central banks anticipate.

Inevitably, when we review these forecasts in the future we will have been surprised to some extent. It will be crucial to react quickly when the macro environment changes, and also to take advantage of fluctuations in markets when the underlying picture has not changed to the extent that market movements imply.