Global growth appears to be strengthening mid-year. Is this real and can it last?

After several years of disappointment, it is understandable that economists are reluctant to forecast stronger global GDP. Consensus has persistently been looking for an improvement, which has failed to materialise.

It is not that global growth has been too terrible. In fact, it has been remarkably steady. The last five years have seen some of the lowest volatility on record (in aggregate).

The positive spin is that the world has proven resilient in the face of a series of shocks. The negative interpretation is that it has taken an awful lot of policy stimulus just to achieve this amount of growth with the fear being that as the yield curve is now nailed to the floor, monetary policy is becoming ineffective.

Early this year consensus finally seemed to give up on the projected bounce in growth. Brexit was just confirmation that there is always another setback around the corner. So for now, most forecasters are just assuming more of the same.

But has this capitulation coincided with the elusive recovery?

We suspect that GDP around the turn of the year was understated...exaggerateing the scale of the recovery

Taking a look at the quarterly path of GDP suggests that a marked pick-up is currently underway. Global growth appears to have grown by over 3% in the second quarter and could better that in the current quarter. However, quarterly GDP can be fairly erratic.

We suspect that GDP around the turn of the year was understated and this in turn exaggerates the scale of the recovery. Much of the improvement seems to be led by the BRICS and China in particular.

We were always of the opinion that the stimulus would be effective in stabilising growth, but the movements in quarterly GDP probably give a misleading impression of the scale of the change in momentum. In addition, Brazil and Russia have suffered deep contractions and as they exit recession, this has also given a lift to global GDP. 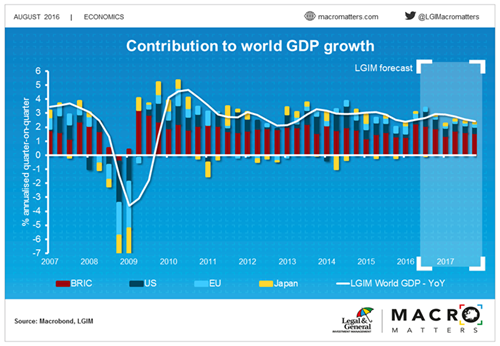 More broadly, we find evidence of a turn in the global manufacturing cycle. We discussed the US inventory cycle in a previous blog (Inventory cycles - a forecasting nightmare), but the picture is similar at a global level where inventory levels appear lean. This usually heralds an improvement in manufacturing growth as companies increase production to prevent inventories from falling further.

Underlying demand appears steady. The developed market consumer continues to spend at an above average pace, but emerging market consumer spending is historically weak and global capex remains sluggish. This should translate into some pick-up in global manufacturing PMIs, but not to the extent of previous cycles given the structural slowdown in global trade.

Our main concern is around China

Beyond the boost to global growth from the inventory cycle in the second half of this year, the growth outlook turns murkier again.

Our main concern is around China, where we expect a renewed slowdown to develop as the positive impact from the stimulus appears to have already peaked. Developed markets remain some distance from a severe downturn, but the consumer is expected to slow as the boost to real incomes from the earlier fall in oil prices starts to fade. So overall global GDP growth is unlikely to break out of its previous trend in 2017.

One wild card is fiscal policy. Should governments decide to take advantage of record low borrowing costs and commit to boosting demand, this could provide a major reflationary impulse.