We've seen buoyant market conditions of late. In fact, conditions are so buoyant that they have brought to the surface some rarely seen dwellers of the market depths.

Over the past few months, risky asset classes such as equities, listed alternatives, high yield and emerging market debt, have re-discovered the old adage that “a rising tide lifts all boats”. Market performance has been boosted by a tide of optimism, and volatility dampened by an absence of waves. This has happened before, but there is something about current market conditions that is quite unusual...

We take a look at the return-to-risk ratio (Sharpe ratio) for a number of different asset classes over a rolling three-month period below. This ratio is calculated as the three-month return on an asset class, divided by its volatility (annualised) over that period. This allows us to compare market performance in risk-adjusted terms. It is based on 14 different markets, including major equity regions, high yield, REITs, infrastructure and both hard and local emerging market debt. 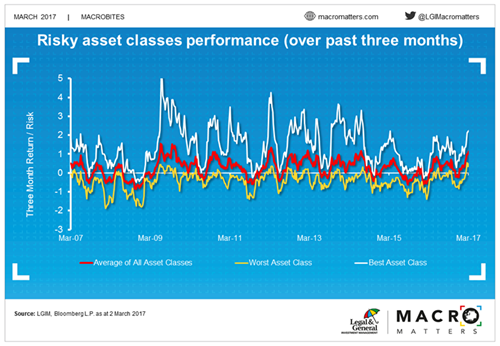 The red line shows the simple average return/risk for all of these asset classes over the past three months. You can see that the average return/risk across markets is currently quite strong; it’s sometimes been higher but not often. It also shows the return/risk of the best (white) and worst (yellow) performing market at the particular time. What’s interesting is that it isn’t that the best performing market is doing particularly well right now – the white line is well below its previous peaks – it’s in fact that the worst performing asset class is doing very well indeed.

Focusing on this worst-performing asset below makes this clearer. Typically, over any three-month period there has been at least one asset class that has declined, leading to a negative return/risk number.  Let’s call this the "submarine asset" as they are typically below water. Occasionally, they poke their periscope just above water. Right now, it is at a ten-year high; the submarine is riding high in the water. 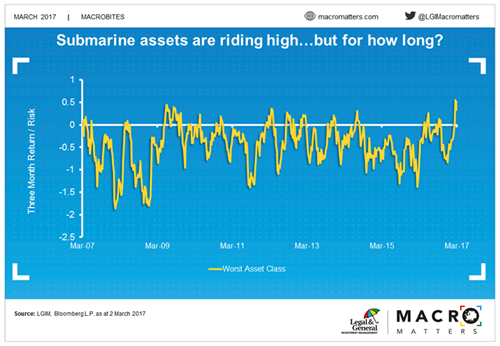 Why is this the case?

US small-cap equities are currently the submarine asset class, having performed quite strongly after Trump's election. So what we are seeing is the three-month window coincide with a period where the assets celebrating the so-called "Trump/Reflation" trade (e.g. US equities, US small-cap) have kept on rallying, and the assets that initially fell on Trump/reflation (emerging market equity and debt) have recovered strongly. In short, it reflects a rising tide of optimism; markets are pricing in an across-the-board upgrade of the environment for risk assets globally.

It is almost certain that at some point these conditions will end and we will see the submarines, and most likely all asset classes, experience a slowing in the pace of returns. There are numerous possible triggers for this, though timing can be difficult. My colleagues have cast some doubts about projecting this universal improvement, certainly if it is based on expectations for tax cuts in the US that can re-energise growth and be fiscally responsible – see Tim's post Phenomenal for example. Some rallies last for prolonged periods, some run out of steam and some...get sunk. There are also a few boats that we think have been running too fast of late, including cyclical equity sectors and high yield, so it seems an opportune time to consider trimming exposure.

Bruce is your not-so-Aussie Australian. While seemingly laid back, this serious(ly deadpan) fund manager likes to have trades lined up before most of the team have come in and is not impartial to a little mental acrobatics when it comes to powerpoint slide creation. His socks can be rather colourful…as can his language… 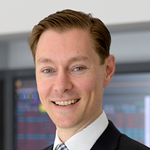