Despite hopes the SPD party leadership contest in Germany this weekend could lead to fiscal stimulus, investors shouldn’t expect an immediate game-changer.

Have you heard about the election campaign with the left-wing candidates promising more spending to stimulate the economy? No, not that one. Or that one.

The political media’s attention may understandably be focused elsewhere, but we shouldn’t forget that there is a leadership contest underway in Germany. Members of the country’s Social Democrat party (SPD) are currently deciding between two sets of candidates to lead the junior partner in the governing coalition into the post-Merkel landscape, with the present chancellor due to step down in 2021 at the latest.

The outcome of the SPD vote will be announced on 30 November, with the final round pitting the status-quo team of Finance Minister Olaf Scholz and Klara Geywitz against the more left-wing pair of Saskia Esken and Norbert Walter-Borjans, who are more likely to push for greater fiscal spending.

Earlier this month, Walter-Borjans argued that Germany needs ‘massive investments’ and called for hundreds of billions of euros to be spent on infrastructure projects.

Scholz, in contrast, has insisted that Germany’s economy is ‘really resilient’ and felt that ‘timely and targeted’ interventions would only be justified in a crisis.

Germany did just narrowly avoid falling into a technical recession, with data released earlier in November showing output rising by 0.1% in the three months to September, following a decline in the previous quarter. 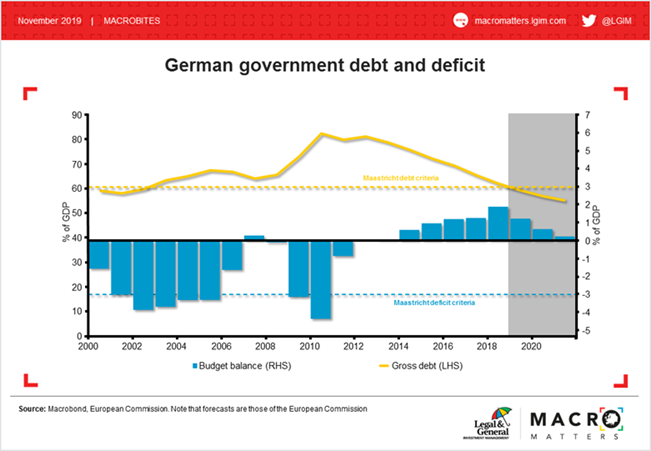 The reality is that we are unlikely to see a big fiscal boost in 2020, especially from Germany, unless recession risks crystallise. This point stands even if Esken and Walter-Borjans win the SPD race. The odds of meaningful fiscal stimulus would increase if they triumphed, but not by much.

For a start, Esken and Walter-Borjans would be more likely to leave the ruling coalition and so would have no direct influence on policy at first. In that scenario, Merkel would try to form a new coalition or, failing that, step down and trigger new elections.

If they did remain in the government with Merkel, they would have to compromise on their fiscal ambitions for the remainder of the current electoral term.

We also need to remember the constitutional debt brake introduced in 2009. Article 115 of the German Basic Law limits the Federal budget deficit to just 0.35% of GDP. The government is obliged to have an amortisation plan for any temporary overshoot of that limit. Loosening the purse strings is now constitutionally constrained.

The most likely route to a big change in fiscal policy – apart from a recession – would be new elections followed by a left-wing coalition government, such as a Green chancellor supported by the SPD and Left. This could happen, but would require a significant shift from current polling. I would put it in the 5-15% probability range of outcomes. This scenario would move markets but, in UK terms, think Ed Miliband rather than Jeremy Corbyn.

So even though there has been a lot of talk about Germany finally loosening the purse strings to allow some serious fiscal spending, I don’t think this is likely any time soon.