Are we moving away from secular stagnation and towards normalization?

There have been several false dawns for global growth since the financial crisis. But over the last few months the reflation narrative has been gaining traction once again. Most striking has been the sustained period of positive growth and inflation surprises. On the growth front, the data surprises have been led by a jump in business confidence, most notably in the US. There are still some question marks around the actual activity data which so far have not bounced to the same degree. Yellen suggested at the March FOMC press conference that businesses are still waiting for confirmation of President Trump’s deregulation and tax proposals before embarking on more aggressive expansion plans.

The positive inflation surprises are a new development, although they seem to reflect the correlation with oil prices. Economists appear to be underestimating the base effect from weak commodity prices this time last year which is raising headline inflation. Outside of the UK, core inflation is still moving sideways. With confidence elevated and headline inflation close to peaking, it will be harder for data to beat expectations from now on. Macro surprise indicators tend to be mean reverting and should fall back even if the apparent revival in animal spirits becomes self-fulfilling. 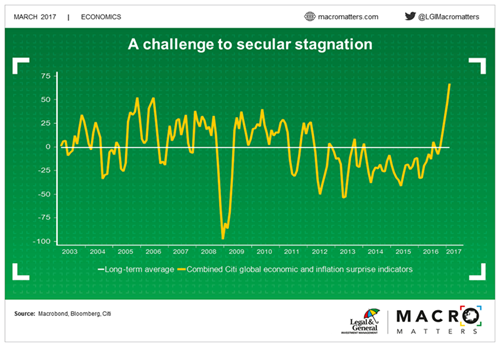 If global growth continues to improve, the debate around whether we are about to witness a more typical normalization cycle is set to intensify. Crucially, and unlike the Fed’s earlier attempts to taper and the first rate hike, the Fed has managed to deliver consecutive quarterly rate increases without a market tantrum. In fact, financial conditions have loosened since December. When considering the Fed’s next move, I think this passage from Bill Dudley’s 2015 speech is the template to follow:

Dudley is scheduled to give us an update on this topic on 30th March.

We remain constructive on the near-term global and US outlook. This should allow the Fed to continue to raise rates, but we see a high chance of another downturn well before normalization is complete. The timing of the next hike will hinge on whether financial conditions remain benign. This in turn will be influenced by whether Congress can make progress on the list of legislative priorities the market seems to be craving. If the stimulus measures pass, this should ensure decent growth into 2018 and rates could continue to rise. But at this point the US is likely to be showing clear signs of being late cycle and overheating. As discussed in profits of doom, if productivity growth has not improved, the profit margin squeeze is likely to intensify. The highly leveraged US corporate sector will then be facing a double whammy of declining profits and rising debt-servicing costs. As delinquencies rise, lending standards will tighten and the credit cycle could go into reverse. Trying to precisely time this is near impossible and much can change, but for now 2019 appears to be the most likely candidate for the next US recession.