Emerging markets, leftist Latin Americans, and the next taper tantrum

Emerging markets (EMs) hate a taper tantrum, but the Federal Reserve (Fed) has been telegraphing its intention to rein in bond purchases for so long that enthusiasm for EM assets has remained muted.

We believe that’s good news for when the tapering actually begins: positioning has not been particularly heavy, which might constrain outflows and losses.

That said, an analysis of external portfolio liabilities shows Latin America – historically highly dependent on foreign investors – could be vulnerable as its politics turn to the left. If change is too radical, there is a lot of money that could seek a home elsewhere. In recent years, Poland and Hungary have been examples of how unorthodox policy choices can drive foreign ownership well below its historic norms.

We assess foreign positioning in EM by looking at countries’ gross external portfolio liabilities: equities and bonds. These capture both historical net inflows and the value of assets held by foreigners. The latest data available are for the first quarter of 2021.

Foreign equity and debt positioning has been reasonably stable since 2015: it’s only slightly higher than it was at the outset of the 2013 taper tantrum. This graph shows the median stock-to-GDP across emerging markets broadly.

But… Latin America is a concern

The next chart benchmarks holdings against their historic levels. Peru, Colombia, Chile, Mexico and Brazil dominate the right side – suggesting they could be most vulnerable if sentiment shifts. Poland and Hungary, on the left side, are under-owned when compared with past years. Korea also looks exposed, but we believe its political environment is more stable than in Latin America. 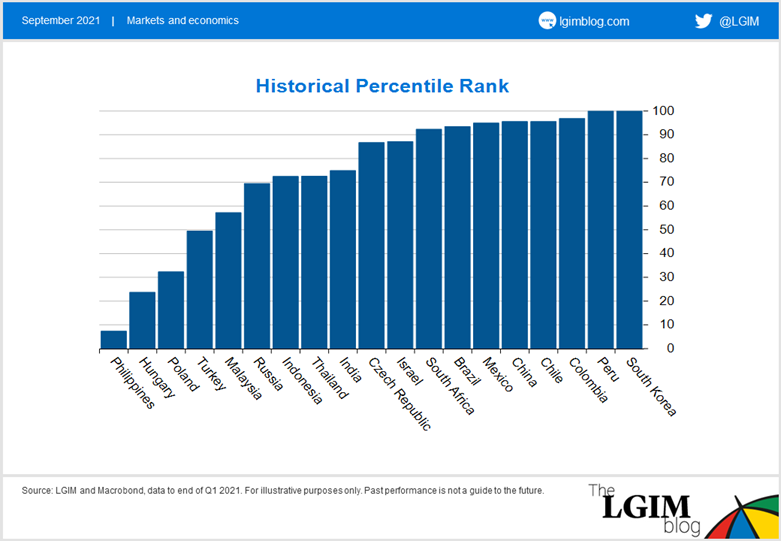 My colleague Erik Lueth has written that in Latin America, the coronavirus pandemic has accelerated political trends by exacerbating social injustices. Debt downgrades in Colombia and higher-than-expected support for hard-left parties in Chile were among the consequences. Mexico has avoided unrest, with the anti-elitist President Lopez Obrador remaining popular while combining state intervention with fiscal austerity.

Colombia, which goes to the polls in 2022, would be our biggest concern, given a current account deficit of 6% of GDP and a weak government that is failing to tighten the belt. In Peru, trade-union leader and political outsider Pedro Castillo was elected in June, prompting a selloff in the stock market and the currency. His foreign minister, a former guerrilla, quit after three weeks. Chile, still unsettled after the mass protests of 2019, has an election in November.

There is a lot of money in Latin America that could leave if the region’s economic policies turn too unorthodox.

Another chart of recent history shines a light on ownership of Hungarian and Polish assets since the outset of the last taper tantrum in 2013. Political developments have followed a similarly populist path in both nations, with Hungary’s Viktor Orban repeatedly winning re-election, Poland’s Law and Justice party returning to power in 2015, and both nations clashing with the European Union on matters from judicial independence to LGBTQ discrimination. 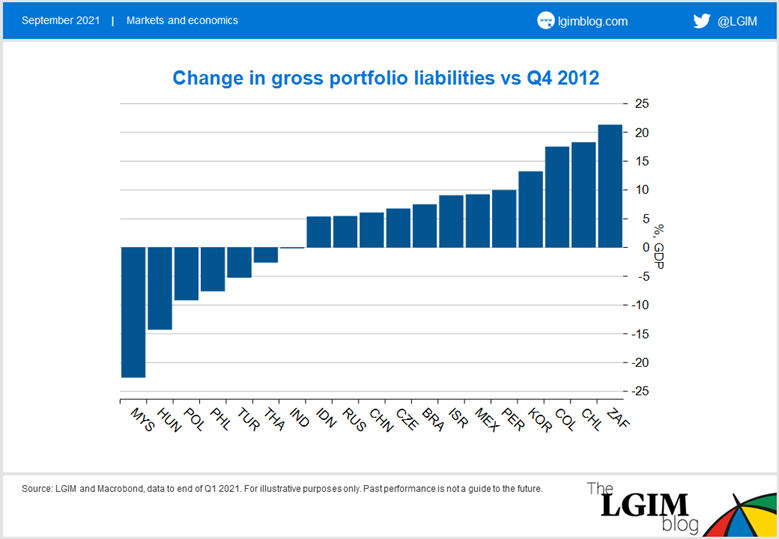 This leaves open the prospects for an upside surprise should Hungarian and Polish politics re-converge towards EU norms. Orban’s Fidesz party and the opposition bloc are running neck-and-neck in recent polls. In Poland, the Law and Justice party is increasingly under pressure from a re-energised opposition led by Donald Tusk, the former European Council president. The displacement of both populist forces could prompt a re-evaluation among investors in the aftermath of the elections.