Economic wounds – like those to our skin – tend to result in persistent scarring. Unprecedented policy support is limiting scarring effects. But if structural change has been accelerated, governments may need to maintain policy support for longer.

Severe wounds typically result in scarring; skin can remain damaged for a long time after an initial blow. Economies are the same: they don’t typically rebound back to 'normal' after a sharp negative economic shock. Instead, they tend to suffer long-lasting damage.

There are various reasons for this:

1. Balance sheets: A temporary loss of income leads to a permanent rise in debt and loss of savings. Households, corporates and governments might restrain spending until their balance sheets improve (e.g. corporates cut costs after being downgraded to restore their previous credit rating, or governments raise taxes after a recession to meet fiscal rules).

2. Risk premiums / confidence: Once bitten, twice shy. In a boom, people are happy to borrow and spend, confident in their ability to repay. After a shock, people become more cautious than before.

3. Credit channels: Banks also become more cautious about lending after experiencing losses. Banks are more vulnerable to structural change than equity investors because they have no upside from higher share prices of 'winners' but instead suffer losses from bankrupt 'losers'.

The chart below shows examples of scarring in the US. The economy tended to fail to return to its pre-recession 'trend' after a recession, with an average 'gap' of 4%. 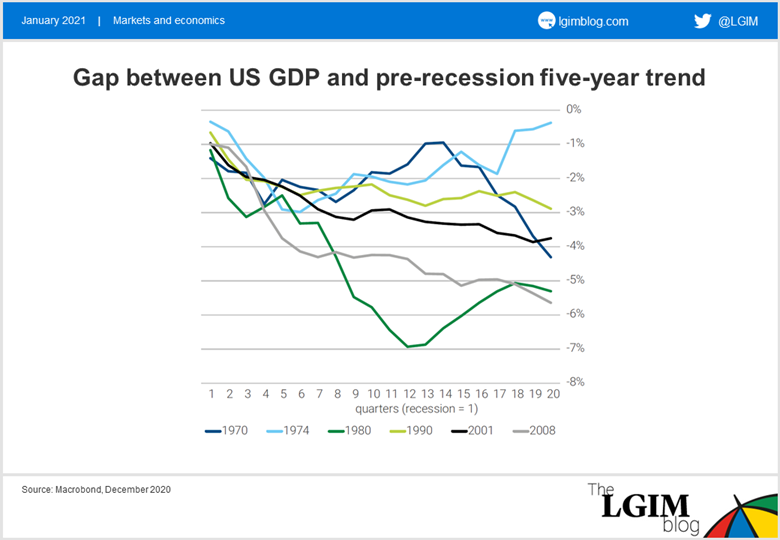 This is line with broader estimates from the IMF1, although after accounting for pre-recession credit booms, demographics and secular slowdown in trend growth, the IMF estimates that scarring only occurs 70% of the time. This suggests there is scope for 'cosmetic surgery' to make the economy as good as, if not better, than the pre-crisis trend.

How are the patient (economy) and doctors (policymakers) doing this time around? We’re seeing mixed signals from the patient, reflecting extraordinary intervention by the doctors. 'Nontemporary' unemployment has risen in line with previous recessions in the US but this has been offset by unprecedented fiscal transfers. European policymakers have also supported households through 'job furlough schemes'.

News on delinquencies and bankruptcies has been mixed, reflecting 'extend and pretend' schemes introduced by governments. For example, the Mortgage Bankers’ Association2 reports a surge in delinquencies across residential and commercial mortgages, but official data from the Federal Reserve3 say all is fine; the difference is the interpretation of being on an 'official forbearance scheme'.4 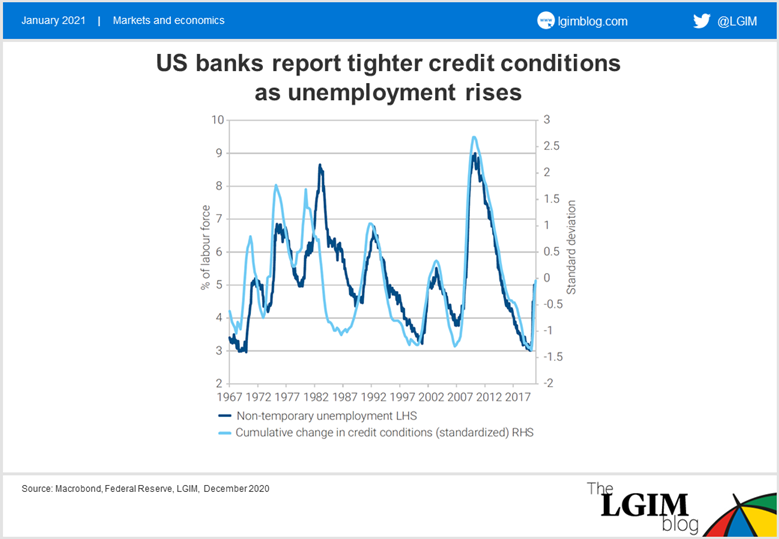 Banks report that they are making it harder for customers to borrow, as they are worried about their exposure to troubled industries. But this is challenged by buoyant housing activity. Other high-frequency indicators like car and heavy truck sales are also holding up better than one would expect, amid tighter credit conditions and weaker confidence. 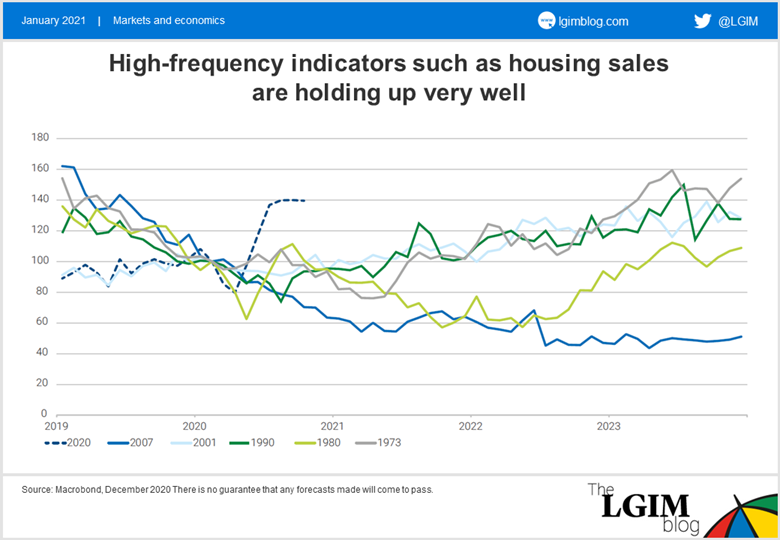 So we have to give credit to policymakers for applying treatment as quickly and aggressively as they did. It looks like we will see mild, rather than severe, scarring – particularly as recent vaccine news should encourage everyone to hold on tight as there’s light at the end of the tunnel.

One wildcard is how much society will change in a post-vaccine world. While some areas might see pent-up demand (holidays), have we accelerated the structural decline in others (high street versus online shopping, business travel and commuting versus conference calls)?

This would leave banks with legacy bad debts; the OECD is already particularly concerned by the risk to companies from higher corporate debt. We therefore agree with the OECD’s assessment5 that fiscal and monetary authorities must be careful not to withdraw policy support too quickly.