Now that the French Presidential elections are out of the way and investors are less concerned about euro area political risks, focus has turned to the next major ‘event’ - what is the ECB is going to do?

With headline inflation in the euro area now frequently being near 2% (1.9% in April and 2.0% in February), the ECB could argue that they have achieved their ‘close to but below’ 2% target*. So does this mean that start of interest rate normalization is imminent? We don’t think so.

That said, we do expect the ECB to announce later this year that it will gradually reduce the pace of asset purchases through the course of 2018. But the tapering is as much about ending the additional stimulus - the economy is growing at a healthy pace of around 2% annualised, sentiment data such as the PMIs and IFO look solid and the labour market has been improving steadily since 2013 – as it is about scarcity of bonds (a topic Chris has discussed before here).

So then why not go further and say the ECB ought to begin raising rates?

Firstly, the ECB has repeatedly told us that it wants to see a sustainable underlying inflation pick up towards the target. And on that front, core inflation (i.e. inflation once volatile components such as food and energy prices are stripped out) has been stuck at around 1% for nearly four years. On top of that, Draghi and others have rammed home their intention to increase interest rates only after quantitative easing (QE) finishes, citing a host of reasons including the impact on financial stability. And during my recent trip to Germany to meet with policymakers, it was made clear that the sooner QE ends the better as it creates market distortions and discourages governments from implementing reforms - that old chestnut of moral hazard.

While central banks have a tendency to change their minds from time-to-time and surprise markets, this time we’re inclined to believe the ECB. Fundamentals such as wage growth and core inflation haven’t picked up enough to warrant tighter policy. 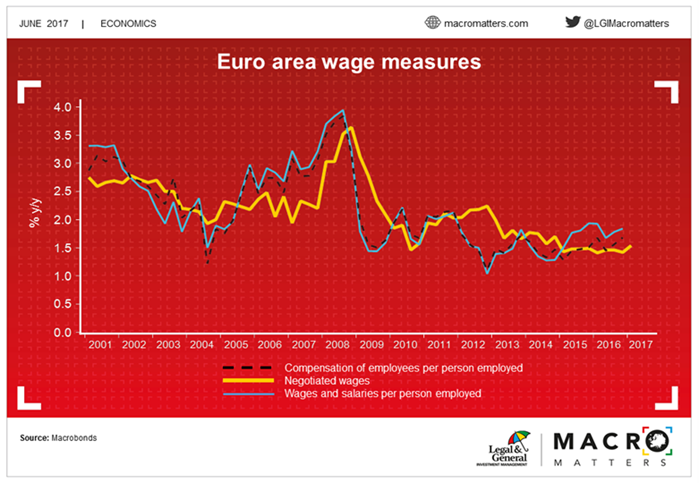 Something to consider is the impact that negative interest rates have had on bank profitability. If there was material concern that persistently low/negative rates were hurting banks, the ECB could change its mind. But when challenged in the past, they have argued that banks have benefited from the economic recovery that loose monetary policy (including negative rates) has helped to foster.

So overall, we think the ECB will acknowledge better growth and use that to announce tapering by the end of the year. But rate hikes are not coming anytime soon; we believe…they’ll be Draghiing that out.

*Central bankers would like things to be dull and predictable but for an amusing outburst take a look at the link here from 2011 when Jean-Claude Trichet, Draghi’s predecessor, famously defended the ECB’s track record on meeting its inflation target as ‘impeccable’.