Does the economy need a helicopter rescue?

How central banks could fly in ‘helicopter’ money to save the economy during the next recession – and what this could mean for markets.

One of my favourite investment blogs – other than this one – is Macro Hive, which recently highlighted a podcast I can recommend by former banker and financial author Frances Coppola.

Coppola discusses the pros and cons of quantitative easing (QE) and why helicopter money is a logical next step in these efforts by central bankers to support the economy.

She argues QE hasn’t worked particularly well in this regard so far: it certainly has propped up asset prices, but it hasn’t really impacted aggregate demand in the broader economy very much (other than through the wealth effect).

And because QE in the forms undertaken to date has tended to involve buying financial assets, it naturally helps those who own those assets. This drives inequality and feeds into populism.

For QE to have the maximum effect on demand, instead of merely buoying asset owners, it needs to reach as broad an audience as possible and it needs to be permanent.

Helicopter money would accomplish just that. There are a few options for such a policy:

• Central banks could distribute money directly to the public, which according to Coppola would be “difficult but doable”

• They could use their fiscal authorities to distribute money, which would be less ideal as it is less certain the cash would reach the broad public

• They could explicitly subsidise government investment projects, which is not currently legal in many countries

Spinning out of control

The biggest question people have about helicopter money is how to stop it. How can central banks remain independent and turn off the money flow when inflation rises?

Though this may not seem a pressing concern when the mainstream economic narrative is dominated by the lack of inflation, falling inflation expectations, and central banks’ rates remaining stuck around the zero bound, it is these worries which keep policymakers reluctant to debate helicopter options in earnest at the moment.

We nevertheless see inflation as dormant rather than extinct, in the US at least, as Chris recently argued. This is why we still like to be long US inflation, a position that is a core part of our risk management. For now, the US Federal Reserve (Fed) can be accommodative and cut rates as “insurance”, to prop up equity markets. This will become significantly more difficult should inflation rise.

One way of mitigating the risk of politicians getting addicted to spending the helicopter money (which could trigger rampant inflation) would be to keep it short and sweet, i.e. done a lot but in a relatively short space of time.

And away from the shadow of inflation cast by the figurative helicopters, Coppola argues that central banks are already at risk of losing their independence, given the rise of populism, increased criticism by political leaders, and the lacklustre economic recovery.

We have written quite a bit about helicopter money, modern monetary theory, and central-bank policies for the next slowdown. We see helicopter money as a clear policy option, especially during the next recession.

What does it mean for investors? Our view is similar to what we said in 2016 on this topic. 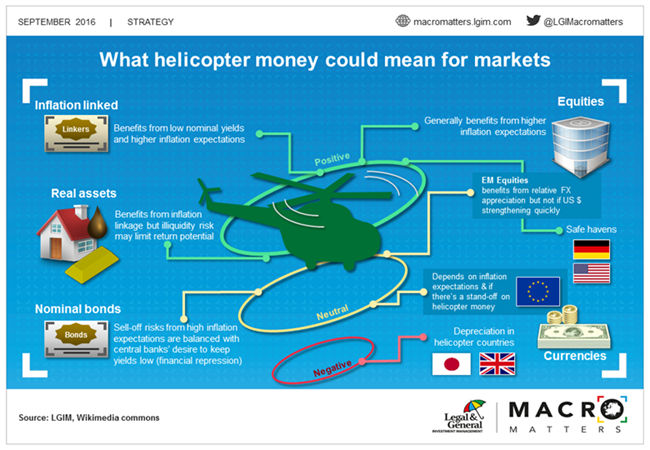 The impact on nominal bonds would likely be finely balanced as the selloff risk due to higher inflation expectations is offset by the desire of central banks to keep rates low. It would probably be good for inflation-linked bonds, thanks to the combination of low nominal yields and rising inflation expectations. We think it would be good for equities as nominal earnings could rise and deflation risk (which has tended to be negative for stock markets) could decline.

Real assets would be perhaps the most obvious potential beneficiaries of helicopter money, given their links to inflation. Gold could specifically benefit as concerns over the future of ‘fiat’ or ‘paper’ money rise. However, illiquid real assets may perform less well due to worries about future risks and the lack of liquidity if an exit is required.

We believe it would require a recession for policy makers to consider new unconventional measures like helicopter money or modern monetary theory seriously. But there are some ongoing discussions on structural increases in fiscal spending, and these need to be watched carefully as such action could be a game changer for markets.

We do not think we are there yet, by any stretch, but we see some signs of a turn in that direction. The Netherlands has plans to launch an investment fund and Germany is moderating, albeit from a fairly hardline position. Watch this space.