Global economic data releases have surprised to the downside in recent months, particularly in Europe. While some of this appears to be noise (data were unexplainably strong in the last quarter of 2017), higher oil prices pose further downside risks.

Former Bank of England governor Mervyn King once likened economic data to disco dancing. Sharp movements in unpredictable directions cause a lot of excitement, but in reality you’re still in the same spot. Does this describe economic data in recent months?

European data have been particularly volatile

European data have been particularly volatile. The composite PMI (a survey of purchasing managers in both manufacturing and services industries) jumped from a robust 56 last summer to a remarkable 59 in January – consistent with an implausibly high 4½% growth. It has since slipped back to 54 (Figure 1). This is still consistent with 2% growth but the persistent decline is disconcerting. Where will it eventually settle? 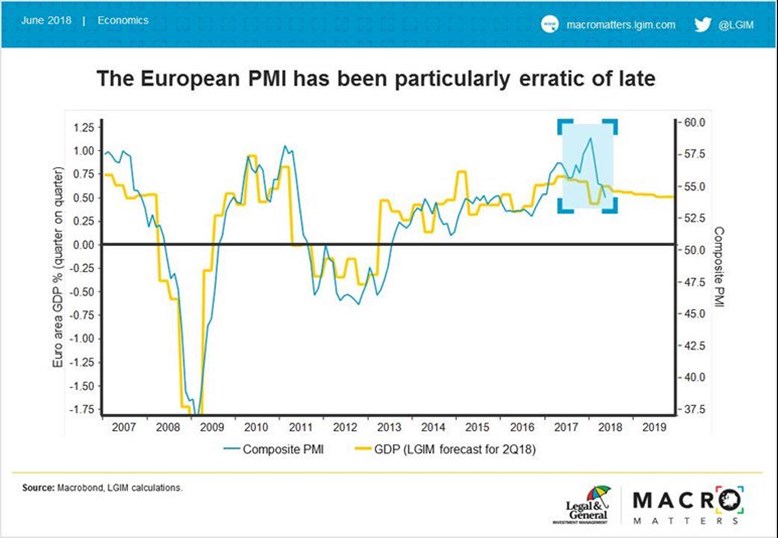 Taking a broader perspective, there are reasons to expect industrial activity to slow from an above-trend pace. Global manufacturing inventories rose at the start of the year. This suggests firms ramped up production too much and need to take their foot off of the pedals. But on the positive side, credit conditions remain loose and this, alongside US tax cuts and low unemployment, should support capital expenditure.

A 'stealth' oil tax is building in the background

The key is how the consumer holds up. OECD consumer spending has been volatile of late, partly reflecting US consumers replacing items damaged by the hurricanes last autumn. Tax cuts are anticipated to boost US consumer spending in coming months, but there is a ‘stealth’ tax hike building in the background from higher oil prices.

Could stronger consumption in commodity producing nations be an offset?

Advanced economy consumption boomed in 2015 after the oil price collapsed and so could be vulnerable if oil prices remain high. However, global consumer spending was much more stable after oil prices plummeted in 2015 as there was a crunch in spending in commodity-producing countries such as Russia and Brazil. These economies are slowly improving and their government finances will benefit from higher oil prices.

The final wildcard is monetary policy. Weaker industrial activity could discourage central bankers from tightening policy quickly. But if the slowdown is due to higher energy prices (and therefore higher inflation) they might still feel obliged to tighten policy.

There are a lot of moving parts. The key variables to watch are global retail sales, manufacturing inventories, investment intentions and central banks' reactions to higher inflation.