The markets appear to have given up on President Trump delivering his campaign promise to boost growth. Yet despite the delay, there are signs this could be about to change with profound implications for the current goldilocks environment.

Waiting for La Marmotte to begin, the peloton was full of enthusiasm and energy, but halfway up the Col du Galibier with cyclists strewn by the roadside, my doubt was building whether it would ever end. The final push was excruciating, but the finish line was eventually crossed. It could well be the same for US fiscal policy.

At the start of the year, we were expecting Congress to make progress on a package of growth boosting measures around tax reform and infrastructure spending. It's now mid year, and the timetable for key legislative priorities has slipped. The Republicans, who campaigned on repealing Obamacare decided to tackle this first, but have not been able to agree on how to reform the Affordable Care Act. This has contributed to delays around tax legislation. Equally, there is internal conflict over the details of tax policy changes within the Trump administration and Republicans. Throw in the legal cloud surrounding President Trump and the battle around the budget resolution and debt ceiling and it is not surprising that the market has lost confidence in the reflation trade. 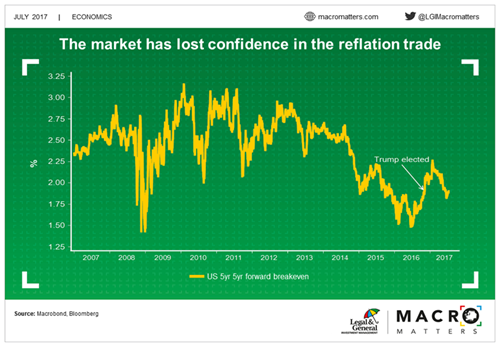 But the US administration has not adopted the feared approach to global trade. In addition, rolling back some of the regulatory pressure on business appears underway. Several energy projects are now likely to go ahead and while it is not clear exactly what will happen to Dodd-Frank, financial regulation looks set to become less onerous. This has helped maintain high levels of business and consumer confidence, although this does not appear to have had much impact on current activity.

Still, the pressure is building for the Republicans to deliver ahead of the mid-term elections and there are signs of movement in key areas. Healthcare appears to inching towards resolution. This does not necessarily mean there will be new legislation, but that Republicans will at least decide to move on, one way or another. The delay to the August recess could be the culmination of the process.

"Just as I was overheating on the final climb up Alpe d'Huez, the US economy could suffer the same fate"

There also appears to be growing recognition that tax reform is just too complicated. The controversial border adjustment tax (BAT) which is a critical revenue raising element to pay for the ambitious corporate tax rate favoured by the leadership lacks support from most Senate Republicans. This suggests the focus might shift more towards pure tax cuts than reform. It also means the deficit is likely to rise in coming years, though there are a number of accounting tricks which are likely to be deployed to enable Congress to claim it is revenue neutral. The most egregious is the potential aggressive use of dynamic scoring. This will assume that the tax cuts boost growth which in turn generates revenues to help pay for the measures!

Away from the all the political noise and despite fluctuations in quarterly GDP, the US has continued to grow moderately, but still above trend. Unemployment was 4.4% in June, a historically low level. Wages and inflation have remained lower than expected which has allowed the Fed to move slowly on interest rates. This in turn has created benign financial conditions, allowing the expansion to continue.

In many ways, the failure to adopt a fiscal stimulus is helping to extend the economic cycle. Yet if Congress finally delivers in 2018, the timing will be poor, coming when the US is already at full employment. A boost to aggregate demand could put upward pressure on wages and inflation and force the Fed to raise rates faster than expected. This could then expose the heavily indebted corporate sector and liquidity fuelled asset prices. Just as I was overheating on the final climb up Alpe d'Huez, the US economy could suffer the same fate.