Credit in China: a stress test you couldn’t have imagined

What has the crisis meant for debt levels in China?

The increase in China’s debt levels after the global financial crisis has been unprecedented. Specifically, the debt of households, corporates and the government has climbed from 140% of gross domestic product in 2008 to 260% today.

When debt rises this rapidly, emerging-market economists fear a misallocation of resources that is often followed by a financial crisis. As we have argued before, China is not a typical emerging market: most of the debt is owed by state-owned enterprises to state-owned banks; little is owed to foreigners.

Nevertheless, the debt build-up was such that it posed a danger to the global financial system and so weighed negatively on our systemic risk outlook and overall medium-term risk score.

In early 2020, this debt stock was submitted to a shock of epic proportions. Large parts of the economy were closed down, 60% of the labour force was put out of work, and an economy that tended to grow 6% annually contracted by 10% in the first quarter.

Worried about the effect on the debt pile, we developed a credit scorecard that tracks 14 indicators across four sectors (macro, property, corporates, and banks) and assigns a colour code according to stress level.

What are our findings? Of the 14 indicators, not one flashes dark red. Some indicators – such as growth, property sales, profits, and the confidence of small and medium-sized enterprises (SME) – did flash red earlier in the year, but have recovered since. 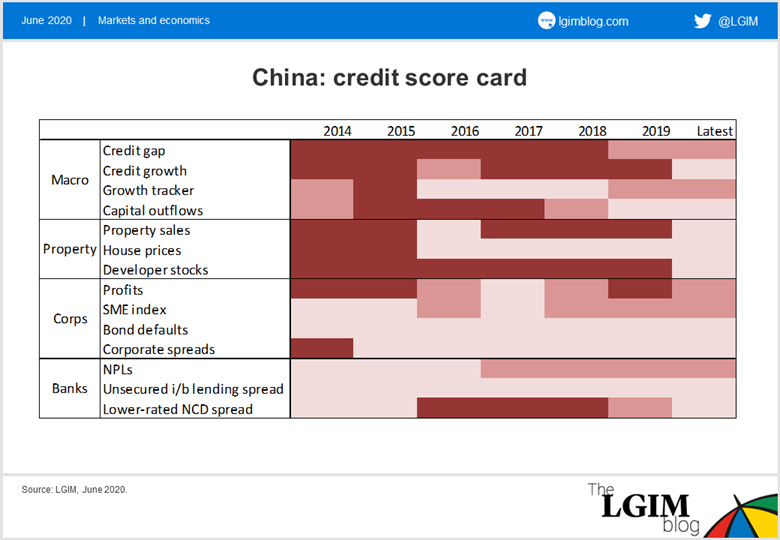 The majority of indicators are now pink, indicating the absence of stress. In particular, the property sector passed the COVID-19 stress test with flying colours. Transactions recovered rapidly, prices never fell, and developer stocks moved in line with the broader equity market.

Corporates did suffer, particularly smaller ones, but bond defaults and corporate spreads remained within normal ranges. As for banks, they never faced any funding stress – and that includes shadow banks which fund themselves with lower-rated negotiable certificates of deposit (NCDs).

We cross-checked our findings with bank analysts, the majority of whom expect gross NPL formation of less than 5% of the loan book. This resilience is due to the fact that only 30% of the overall loan book is exposed to vulnerable sectors such as SMEs and unsecured consumer credit. The other 70% of loans are mortgages and credit to state-owned entities. Note that Chinese banks can absorb 10% of gross NPL formation through profits, excess provisioning and excess capital.

There are nevertheless parts of the banking sector that look vulnerable. For example, the People’s Bank of China classifies 12.5% of all rural and commercial banks as high risk. However, they account for just 3% of banking-sector assets, meaning they are small enough to be merged with larger banks or bailed out by the government.

The bottom line is that the vast pile of Chinese credit passed a stress test that went well beyond what people could have imagined. It gives us further confidence that China is not a typical emerging market. Additionally, while we remain concerned about the evolution of relations between the US and China, we will need to debate whether our assessment of medium-term economic risks in China has to change.