Amid all the global economic and market uncertainty, conviction about the macro outlook is low. But the one engine of growth I think we can rely on is the US consumer.

US consumption growth has averaged 3% in real terms over the last five years, and represented around one sixth of the total growth in the global economy. We expect some gradual cooling in the quarters ahead but an abrupt slowdown remains unlikely given supportive fundamentals.

The biggest factor for consumption is household income growth. Employment growth should slow from the strong pace seen in 2018 and the huge January payrolls report looks like an outlier, but we still expect payrolls in the 100-150k range throughout the course of the year.

At the same time, nominal wage growth has finally picked up and should edge higher given widespread reports in the Beige Book of labour shortages and recruitment difficulties across the various districts and sectors of the US economy. So the combination of further job growth and rising wages should continue to generate nominal labour income growth in excess of 4%.

Over the last five years, US consumption growth has represented around one sixth of the total growth in the global economy

But near-term overall real disposable income growth is likely to be even stronger for a couple of reasons. First, households are set to enjoy a bumper tax refund season. Following the tax cuts last year it appears as if withholding allowances have not fully adjusted to the lower tax rates and more generous tax credits. This should add more than 1% annualised to first quarter income this year.

There is a risk of a delay due to the government shutdown, though the White House has said the cheques will still go out on time. Second, lower crude oil prices act like an additional tax cut for consumers. Gasoline prices are down around 20% since the summer. Given its near 5% weight in household consumption, this will raise real disposable income by almost another 1% annualised in the first quarter. 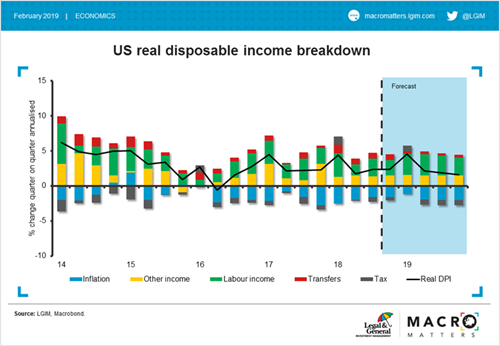 It is not enough to have strong income growth. It is possible that consumption still disappoints because households decide to raise saving instead. But the usual triggers of a sudden rise in saving currently appear absent. The saving rate appears relatively steady in recent years (though the data can be prone to heavy revision). Other evidence also suggests households have not been spending beyond their means. If anything, they have been relatively cautious. Households have continued to deliver, despite the rise in their wealth. The recent correction in equities still leaves most households sitting on large capital gains.

We have recently seen some decline in consumer sentiment, but from extremely high levels

Furthermore, the rise in house prices since 2012 has now restored equity levels in property to pre-crisis levels. There is even an upside risk to consumption should households start to borrow again against this increase in housing wealth. Another potential trigger to force up the savings rate would be a rapid tightening of credit conditions. The most recent Senior Loan Officer Survey showed that lending standards are no longer loosening, but the survey was taken during the worst part of the turmoil in financial markets.

The final trigger would be a spike in interest rates and debt servicing costs. But in a change to our Fed view since last year, we now only expect one rate hike by end 2019 as the central bank signalled at the January FOMC that it no longer has a hiking bias and can afford to be patient. In any case, the US consumer is not particularly sensitive to changes in short-term interest rates.

The final cross-check on consumer behaviour is the various confidence and sentiment measures. In recent weeks we have seen some decline (probably impacted by the government shutdown), but from extremely high levels. Confidence could fall further and still be consistent with continued 3% real consumer spending growth. Historically, it has taken a major asset price decline or shake out in the labour market to derail the US consumer. More likely, a resilient US consumer should continue to support global growth this year.