China is boosting growth through leverage. Since China already sports one of the highest debt levels worldwide, investors are rightly concerned about a financial crisis. We also see China on course for a financial crisis, but feel the crisis is still a few years away.

To gauge the risk of financial crisis one needs to take a closer look at who is funding China's debt.

1. Foreign funding of Chinese debt is negligible. This is because China has one of the highest saving rates worldwide and simply doesn't need foreigners to fund its debt. It also means that foreigners can't suddenly withdraw funding which caused many emerging market financial crises in the past.

2. 70% of Chinese debt is financed by Chinese banks which are state-owned. Hence, non-performing loans and bank capital are not an issue as long as the sovereign remains creditworthy. With government debt at about 50% of GDP this is the case. 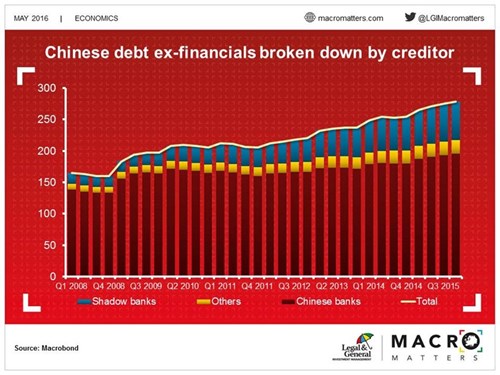 Also, banks are almost entirely funded by deposits which in contrast to wholesale funding tend to be very sticky. This is reflected in China's loan-to-deposit ratio which at 70% is the lowest among emerging markets. Given a relatively closed capital account and still underdeveloped financial markets, savers have few alternatives to bank deposits.

While we don’t expect a financial crisis just yet, on current trends China is likely to experience a crisis in the next few years.

Another 20% of Chinese debt is funded by shadow banks. These tend to be owned by traditional banks, but operate at arms’ length. Like traditional banks they engage in maturity transformation, but don’t have the capital or reserves to safeguard against emergencies. Shadow banks could easily experience a bank run and are the Achilles heel of the Chinese financial sector.

But, in the event of a run on shadow banks they could be moved back on the balance sheet of regular banks. If this were to happen, banks’ loan-to-deposit ratio would increase to 95%, still at the lower end among emerging markets. The reason this did not work in the US in 2008 was that banks already had a loan-to-deposit ratio of 260% going into the crisis—they were already too leveraged.

So, while we don’t expect a financial crisis just yet, on current trends China is likely to experience a crisis in the next few years. As banks continue to lend to unproductive enterprises, their free cash flow will dry up. This will force them to rely more heavily on wholesale financing thereby sowing the seeds of crisis.

20% of Chinese debt is funded by shadow banks. In the event of a run on shadow banks they could be moved back on the balance sheet of regular banks.

In addition, financial liberalisation — particularly the emergence of shadow banks and the gradual opening up of the capital account — is undermining the traditional funding model. Financial liberalisation is a common precursor of financial crises and the IMF has warned on several occasions against the premature opening up of the capital account. The trend from bank deposits to shadow banks or investments abroad could accelerate as the interest differential with the US is bound to increase. 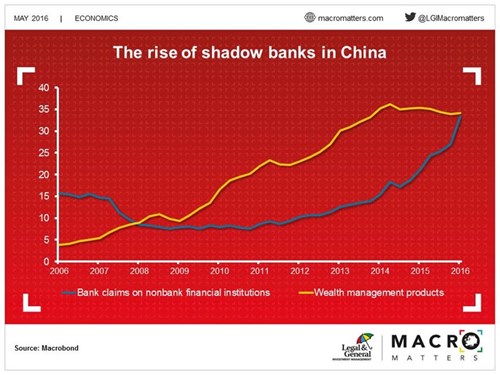 Nothing is beeping, yet

We can take comfort in knowing that risks which are highlighted by wholesale funding (which increases gradually) and capital outflows (which can be initially buffered by FX reserve drawdowns and tighter capital account regulations) can be monitored.