Monetary policymakers came to the rescue in March. What happens next?

Central banks had no choice in either 2008 or March this year. The world needed to be saved from a financial meltdown and so they flushed liquidity into the global economy.

However, today’s monetary policy can contribute to tomorrow’s meltdown. Keeping interest rates low to provide a safety net for markets can induce corporations and households to take on more debt and more risk. This dynamic has also tended to stoke inequality, as asset prices have been boosted even though unemployment has spiked. It’s a cycle: managed stability creates instability.

Global leverage has duly increased significantly this year as a result of these interventions, undoing much if not all of the deleveraging of recent years. In a normal world, increased leverage is often resolved by a credit crisis, massive defaults, forced liquidations, or massive inflation. But apparently this isn’t a normal world.

Most of the increase in debt during the pandemic has been in the public sector, and a large part of this has been absorbed by central banks via quantitative easing. This debt sits with central banks and is perpetually rolled over, effectively creating debt monetisation. Central banks could commit to never selling it or they could just write it off, which would improve debt-to-GDP ratios. Cancelling public debt like this is prohibited in some countries, due to the moral hazard it could create for politicians. For others, the only constraint is ultimately inflation.

But ballooning debt is also a symptom of other problems like weak productivity and inequality (encompassing poor health, low wage growth, and poor education). This could result in further political tensions and anti-globalisation, similar to the experience of the 1930s. 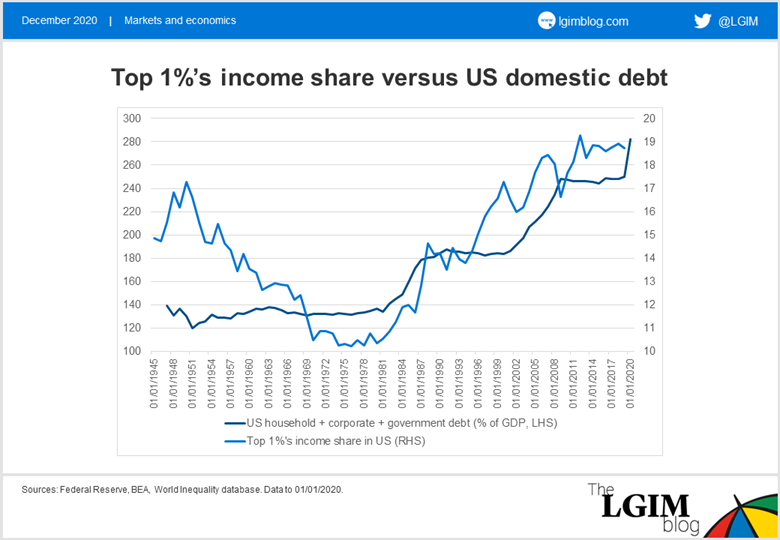 Given the current economic output gaps, we don’t see runaway inflation as a likely scenario but our head of economics does expect mildly higher inflation in the years to come. This would change if we saw continued broad global fiscal support financed by central banks.

For now, we believe that if inflation expectations rise further, investors should go against that trend and reduce any exposure to inflation-linked bonds in their portfolios.