Caribbean clue to the CPI conundrum

Bond yields fell last week despite inflation and growth both surprising on the upside. We think a small island chain in the Caribbean holds a clue to the newfound resilience of the Treasury market.

The sense of economic renaissance is palpable. Last week, we learned that China’s GDP grew by 18% year-on-year in the first quarter and that US retail sales jumped by an extraordinary 28% year-on-year in March. Such annual comparisons are flattered by the base effects from the collapse in activity this time last year, but the momentum is evident.

On top of these strong growth numbers, US inflation rose by more than economists’ consensus expectations in March. Core CPI rose by 0.34% month-on-month (versus the expected +0.2%) and 1.65% year-on-year (versus the expected +1.5%). Several of the beaten-up components climbed slightly on the month, but still remain depressed with scope to rise significantly over the next few months as the economy opens.

In the coming months, we expect core inflation (on both CPI and PCE) to peak around 2.5% year-on-year. There are strong base effects which we believe make a rise above 2% inevitable. In addition, there are reopening effects with some prices normalising and supply-chain disruptions boosting components such as used-car prices. Finally, demand-pull inflation from stimulus spending could add to upward inflation pressure. It is plausible that core inflation could even reach 3%.

Despite that upside news, and the prospect for stronger inflation ahead, Treasury yields have fallen over the course of the past couple of weeks. The chart below helps us to understand what’s happening. Treasury International Capital System released data last week, which revealed that investors domiciled in the Cayman Islands have made net sales of $400 billion of US Treasuries in the 12 months through to February. Not bad for a small island chain with a population of 70,000! 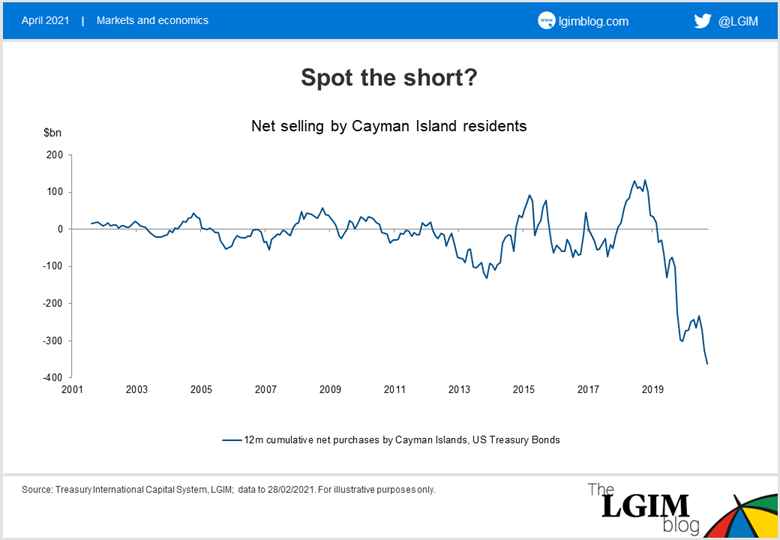 What’s going on here, and why is it relevant? It is estimated that over 80% of the world’s hedge funds are registered in the Cayman Islands.  The size of the net sale suggests that a sizeable short base has built up in what is euphemistically referred to as the “fast-money community”. Furthermore, these data are likely to be an underestimate of the true picture as they only capture cross-border purchases/sales involving a US investor on one side of the transaction. Any foreign-to-foreign transaction (e.g. a Cayman Island resident hedge fund selling to a London-based securities broker) are not included.

The message on positioning from these data are matched by a similar story from the options market and surveys of investor sentiment. Having worried about COVID-19 for 12 months, institutional fund managers now say they worry most about inflation and a bond-market tantrum.

Yet in the words of General George S. Patton, “If everyone is thinking alike, then somebody isn’t thinking.” Consensus bets can sometimes pay off, but they are vulnerable to small changes in sentiment having an outsized impact. The size of the short base is now such that the reflationary narrative needs to be constantly buttressed by new information to keep yields moving up.

The bar for taking short duration positions just got that little bit higher.