Brexit scenarios and the art of topiary

With so much still up in the air regarding Brexit, making predictions is difficult – particularly about the future. But we can prepare for a range of different outcomes and market environments, pruning our ‘probability tree’ as events evolve. Here’s our latest scenario analysis.

Four months ago I talked to camera about how the UK’s current political balancing act could play out. But four months is a long time in politics, and plenty has changed since then.

Using the collective judgement of the Asset Allocation team's Brexit watchers we have practised the art of topiary to avoid an unwieldy tree. We have therefore trimmed a number of branches and ignored the smaller probability twigs altogether. We have also introduced a ‘return to start’ button, which means going back to the roots and seeding a new plan, before another vote in Parliament.

The outcomes we consider here are the current deal Prime Minister Theresa May is pursuing in Parliament, i.e. a relatively soft Brexit with transition secured, a hard Brexit, i.e. no deal; a second referendum and an European Economic Area plus (EEA+) deal, i.e. similar to the arrangement with Norway and a customs union. Looking at the amount of proponents/opponents in Parliament for any of these four outcomes today, the numbers do not appear to stack up convincingly for any of them. However, one will ultimately happen (probably!), so something will have to give. 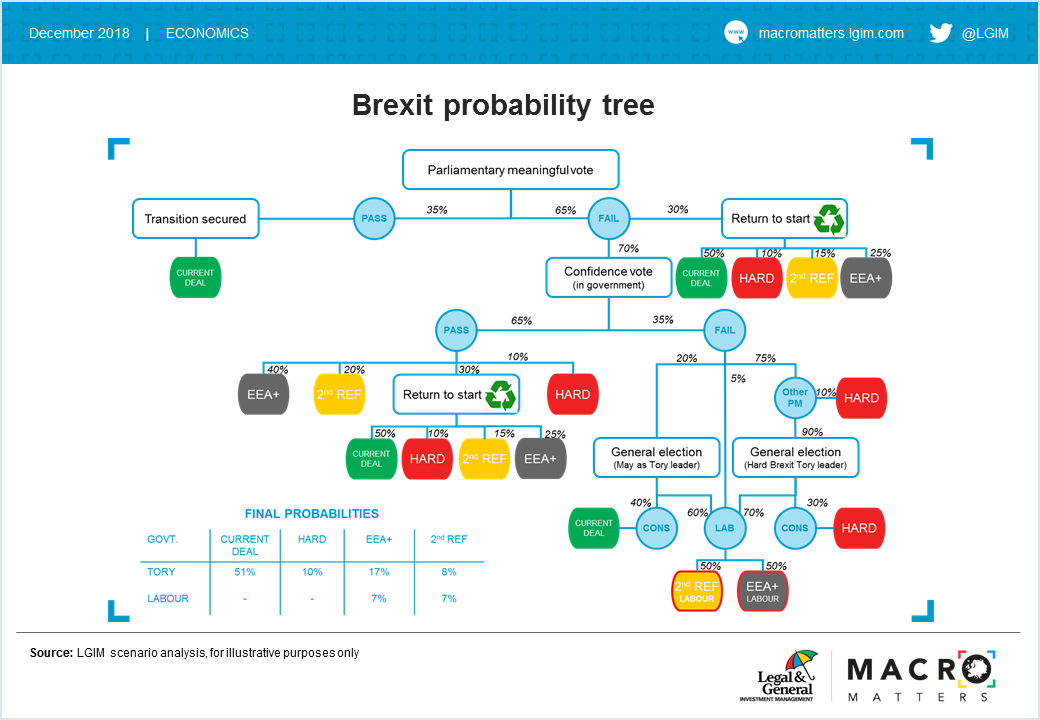 What could this all mean for markets?

A relatively soft Brexit is likely to be the least disruptive endgame scenario, consisting of an assured transition period with largely no change. In terms of the economic narrative, think in terms of trend-like growth and a tight labour market (particularly with net immigration continuing to fall). This, in turn is likely to allow the Bank of England (BoE) to resume raising interest rates at a gradual pace. From an investment perspective, confirmation of this outcome is likely to put upward pressure on the pound.

We believe that a hard Brexit is unlikely. Should it occur, however, World Trade Organisation rules would be on the cards, as general disruption and confusion abound. In this scenario, we see GDP falling in the order of 2-3%, and the BoE lowering rates and restarting quantitative easing to help counter a likely recession. Both gilt yields and sterling could fall sharply if a hard Brexit looks on the cards.

If the chances of a second referendum increase, so do the chances of Brexit not occurring at all, assuming the current polling is accurate in suggesting that another vote would result in a ‘remain’ outcome (if that is one of the options). In investment terms, both the pound and gilt yields would be likely to rise.

However, the extent of any rise from here could be impacted by the party in power, with a general election followed by a Labour victory likely to boost gilt yields in relative terms as the market discounts a higher probability of more expansionary fiscal policy and dampen sterling as higher corporation tax and likelihood of nationalisations are priced in.

A Norway-style Brexit – with the ‘+’ denoting the addition of a customs union – would be the softest Brexit of our scenarios. As a result it is likely to be the most positive for sterling and prompt the largest rise in gilt yields. The route to getting to this outcome is complicated though, and as with the second referendum scenario above, the party in power will have a bearing on the market reaction.

Taking all this into account, we’ve followed the same approach as the Brexit outcome probability tree in attempting to weigh up the potential overall investment implications across the various outcomes, and calculated a probability-weighted outcome for sterling (versus the US dollar) and 10-year gilt yields.

It pans out that we see around 4% upside to sterling and potential for around a 30bps (0.30%) increase in gilt yields, which nicely explains why we are tactically long sterling and short gilts across our multi-asset portfolios today. But we are not under any illusions that this is a precise science – that would suggest we can't see the wood for the trees… 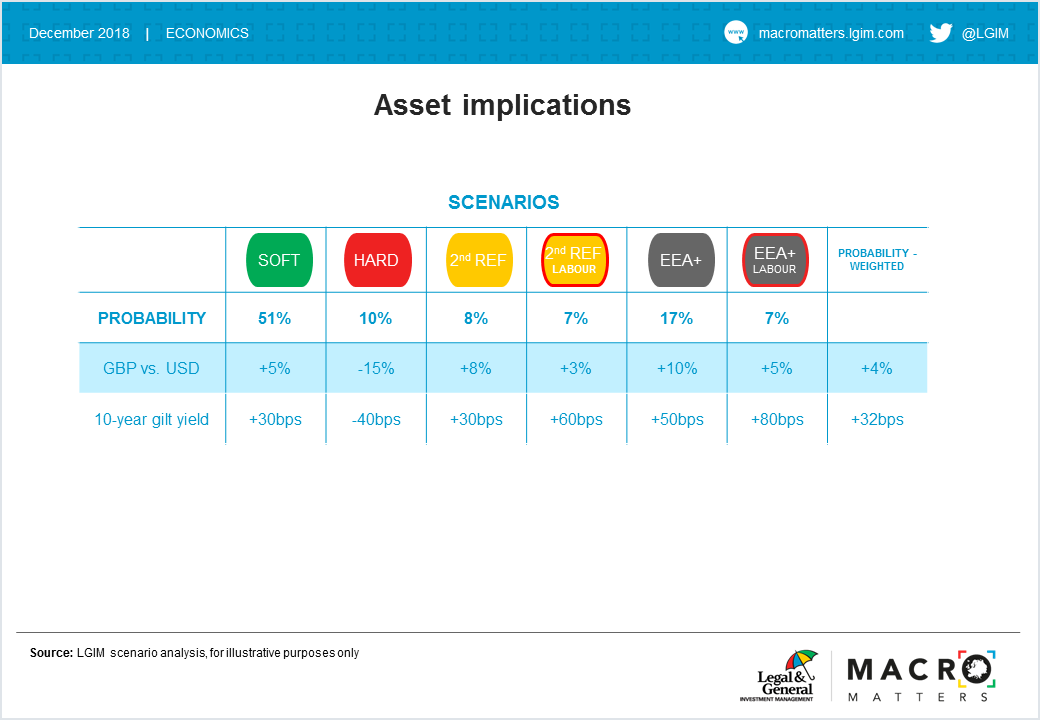