US core inflation has remained subdued, but there are signs that wages are beginning to stir. Is it time to resurrect the Phillips Curve? What can we learn from history?

With Bruce referencing the 1966 World Cup in his latest blog and following England’s unbeaten run in qualifying for Russia 2018, I have also been looking back at this era to see if there are some interesting parallels for today. One recurring theme is economists struggling to get their models to work. No sooner had William Phillips published his 1958 paper (on UK wages and unemployment over the previous 100 years) and the Phillips Curve fell into disrepute. In the first half of the 1960s US unemployment continued to fall and yet core inflation remained stubbornly low at between 1-2%. Yet in 1966, core inflation suddenly jumped to over 3% and then rose further later in the decade.

The tipping point appeared to be when unemployment hit 4.0%. So perhaps the word ‘curve’ is a misnomer. There could be some threshold or severe kink when the economy reaches full employment. The Vietnam war of course played a crucial role. Federal spending (entirely on defense) shot up by over 1% of GDP from mid 1965 to early 1967. The deployment of over 300k more troops served to tighten the domestic labour market further. This episode shows it is not a good idea to add stimulus to an economy already at full employment. The only other example of stimulus well into an economic expansion was the Reagan tax cuts which took effect in fiscal year 1987. Both periods ended with overheating. The Bush tax cuts in 2003 and the Recovery Act in 2009 were clearly more sensible from a macroeconomic perspective and designed to kick start the economy following recession. 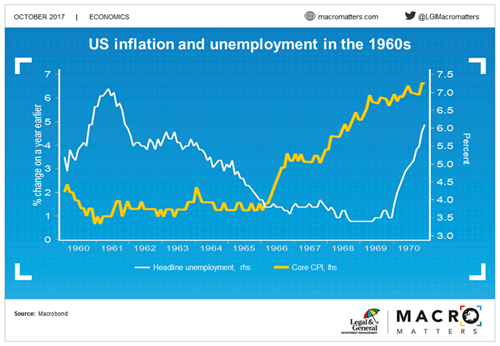 So what can we learn today? The absence of inflation as unemployment has fallen does not necessarily mean the Phillips Curve is obsolete. First, after outlining a bunch of excuses for why wages had failed to pick up in an earlier blog this year, evidence of gradually increasing wage pressure is finally building in both the recent average hourly earnings and the Beige Book. Second, with growth momentum continuing, unemployment seems set to fall though 4% over the coming months. At this stage there a risk as Yellen pointed out in a recent speech that inflation responds in a nonlinear matter to resource utilisation. Finally, there is the potential fiscal stimulus.

Is the US about to repeat the macroeconomic mistakes of the 1960s? There is still uncertainty around what exactly, if anything, will pass through Congress. Most economists appear to have a slightly better than evens chance of some tax cuts taking effect in 2018 and we assume passage of a modest fiscal stimulus in our baseline economic projections. In recent days, markets, which had previously appeared sceptical, seem more aware of the possibility, though I don’t feel pricing reflects the likely ultimate consequences. 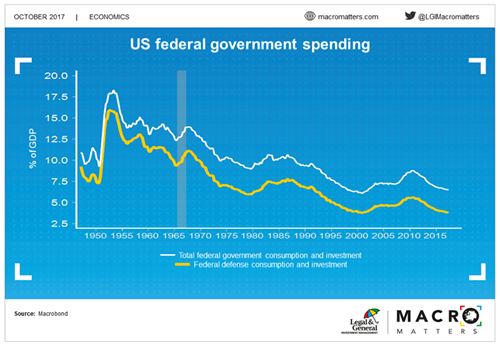 I don’t want to overplay the 1960s experience (especially the prospect of England winning the World Cup). Federal spending should have a larger multiplier on activity and inflation than tax cuts, especially those to the corporate sector which could end up being largely saved. The lack of unionisation and other structural factors also reduces the chance of wage price spirals developing. Yet the impact on financial markets could be profound given the embedded confidence that inflation is non-existent. A mere flickering of inflation could force the Fed to tighten more aggressively than expected, disrupting markets predicated on low interest rates.