Time to invest in India again?

India has been one of our favourite markets within EM since the early days of the Modi administration. But we have not always been invested. Several of the factors we track now suggest the investment case has improved enough to return to a long Indian equity position.

Our original investment case for Indian equities drew heavily on Erik’s view that the country’s medium-term prospects are bright, helped by Premier Narendra Modi’s structural reform programme. In principle this medium-term view has remained in place and has just been reaffirmed in Erik’s excellent blog post recently.

But we have not had a long Indian equity position at all times. We aim to be flexible in implementing a medium-term theme. After all, the future has not been written and long-term forecasts require constant monitoring.

"The future has not been written. No one’s has. Your future is whatever you make it. So make it a good one!" ~ Doc in Back to the Future

We identify signposts to judge and take market factors into account to vary the exposure over time. In the case of Indian equities two important changes triggered reducing the exposure: sentiment and reform commitment. Sentiment indicators suggested consensus had become extremely bullish on India at a time when our conviction in the government’s commitment to pushing ahead with the reforms took several hits. It was time to reduce our position.

Over the past few weeks, however, the investment case has brightened up from several perspectives.

First, our conviction in India’s commitment to reform increased again. Erik shows an impressive chart in his blog showing the progress that has been made and points to the recent currency reform as proof of Modi’s renewed reform zeal. This shifted India back up our watch list to look for an entry point.

We did not have to wait long. That entry opportunity came earlier this year, when the second of the factors that got us to sell before had reversed. The growth hit to the Indian economy from the implementation of the currency reform spooked investors and turned very bullish sentiment into unusually bearish sentiment; an opportunity from a contrarian perspective. 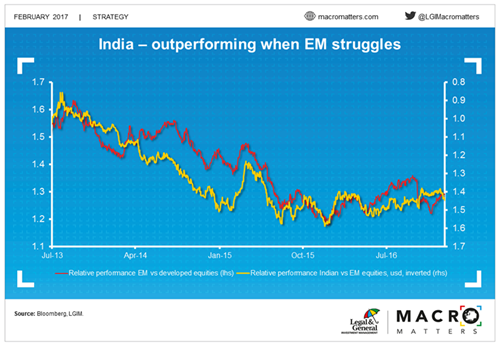 In addition to these India-specific arguments it is also the broader characteristics of Indian equities that appeal to us; particularly their defensive and low beta qualities within EM. India tends to outperform EM when the EM complex struggles (see chart above) and we’re generally cautious on EM exposure. We’re concerned about China’s cyclical growth in the coming months and even more importantly, one of the medium-term tail risks we are most worried about is a credit crisis in China. While such scenarios would have implications for global equities, we would expect India to hold up better than other emerging markets. The same applies for geo-political risk involving tensions between Donald Trump’s America and China and greater protectionism; India would not be immune, but impacted less than its EM peers.

We expect our long Indian equities position (and similar long positions in Indian bonds and the rupee) to last longer than last time, but will remain flexible in the tactical implementation of this medium-term view.