Assessing the cycle beyond Delta

The US economic cycle is progressing rapidly but, despite the recent surge in inflation and concerns around the Delta variant, some of our indicators are looking better than expected.

The economic cycle typically evolves slowly over a number of years. But given the sharp rebound of the past six months, it is worth refreshing our recession indicators last reviewed in the blog in February.

Many of the inputs are published on a quarterly basis, and this update includes the annual benchmark national account revisions as well as a significant easing in lending standards from the Senior Loan Officer survey. This framework is one of the tools we use to help determine where in its economic cycle the US currently resides.

The cycle continues to progress relatively quickly, with growth likely to remain well above trend for the next few quarters despite concerns around the Delta variant. For now, the indicators are relatively benign – with the exception of the large, but likely transitory, rise in inflation. 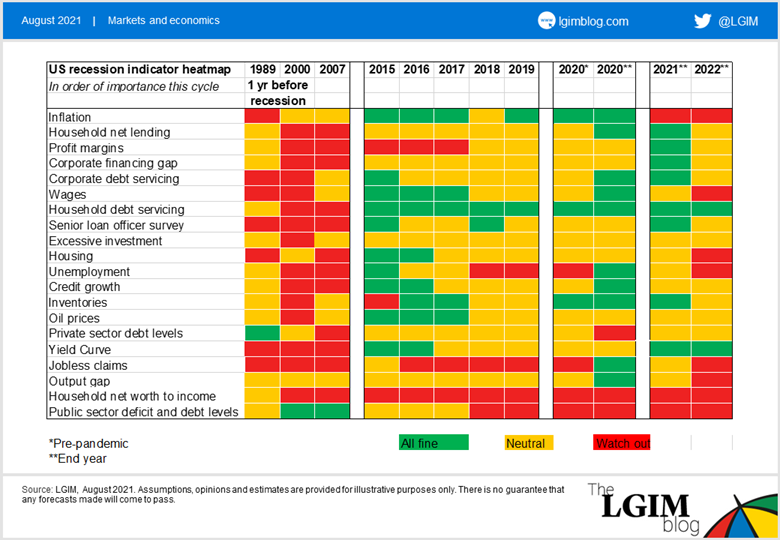 Relative to last quarter, there has been some improvement in the corporate sector variables; the benchmark revisions have raised corporate profits and cash flow, so both variables now paint a more positive picture both this year and next.

Other variables are unchanged, though lower rates help at the margin. Inventories, which were already lean, are even leaner. This may be good for future growth, but bottlenecks are contributing to the current flare up in inflation.

Inflation is clearly the most important factor. If the current spike proves not to be transitory, the Federal Reserve will probably have to respond and higher rates will eventually lead to deterioration in many of the corporate sector variables.

As things stand, with continued above-trend growth and loose monetary policy, there is a risk that the US moves rapidly through mid-cycle this year and into late-cycle in 2022.

For now, and as blogged by Emiel, we have lightened our bullish stance on risk assets due to the threat of Delta in China. But because of our current mid-cycle views, we are not turning completely neutral or even bearish on risk assets.