Mexico's economy has faced no shortage of headwinds over the past few years. As a manufacturing hub, it suffered more than others from the post-2008 weakness in the global cycle. It was hit hard by the collapse in oil prices in 2014. And in 2016, it became a key target of President Trump’s campaign against trade and outsourcing. However, there are signs that the headwinds facing Mexico's economies could now be abating.

Mexico's manufacturing is staging a strong rebound, fuelled by the US recovery. Growth in the first quarter beat expectations by a wide margin, prompting economists to upgrade their forecasts.

Similarly, PEMEX, the oil major whose inefficiencies became well known following the oil price collapse, has turned the corner. Under its new chairman, the company cut employment, sold non-core businesses and made its first profit since 2012. The slide in Mexican oil production also appears to be about to reverse, with a major farmout completed in December.

Mexico's manufacturing is staging a strong rebound, fuelled by the US recovery

However, not all is hunky-dory. Fiscal consolidation has progressed slowly and the 2017 targets again look ambitious. With all rating agencies having Mexico on a negative outlook, this should not be taken lightly. 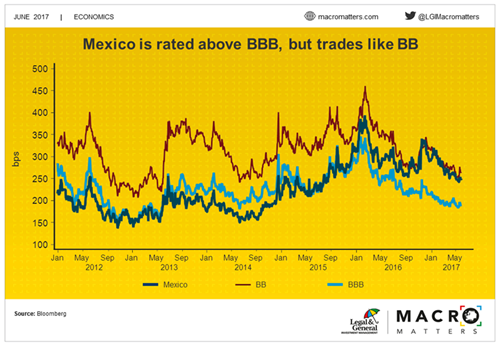 In our view, however, these risks are more than priced in to markets. Despite the rally this year, the Mexican peso is still the second cheapest emerging market currency when benchmarked against inflation differentials, productivity growth, terms-of-trade, and other fundamentals. The sovereign trades like a BB credit, although it is rated above BBB. So could Mexico's fortunes be about to turn?