Anyone planning a Christmas party?

We could see a double dip in restaurant sales in the Northern hemisphere heading into winter, which could contribute to the ‘V-shaped’ recovery becoming more ‘square-root’ shaped before growth improves again in the spring alongside progress on vaccine distribution.

With COVID-19 cases picking up across Europe and in parts of the US, the hospitality sector is beginning to feel the chill of autumn. Its outlook appears extremely challenging after a brief respite over the summer.

Lockdown caused sales in US food services and drinking venues to more than halve during April and led to an even steeper plunge in Europe. By August, US sales had recovered to above 80% of their pre-virus level; warm weather across the country allowed much of this activity to take place outside.

Seasonal adjustments to the data do take into account a reduction in total sales during the winter (although December is typically in line with an average month for the year) but not most hospitality moving indoors.

We know the virus is transmitted far more readily in confined spaces, which has two effects. First, restrictions are applied more stringently to indoor versus outdoor activities as it is far easier to socially distance outside. This would introduce a new element of seasonality not usually apparent in the data.

Second, attempts to move indoors as the weather cools are already increasing virus case loads. This creates a potential double-negative effect: less overall activity because of existing indoor restrictions, combined with further indoor restrictions during winter. Or put more simply, who is planning a Christmas party?

As the weather gets colder, this creates a risk that consumer activity conducted outdoors in the summer will decline much more sharply than seasonal adjustment factors would predict. 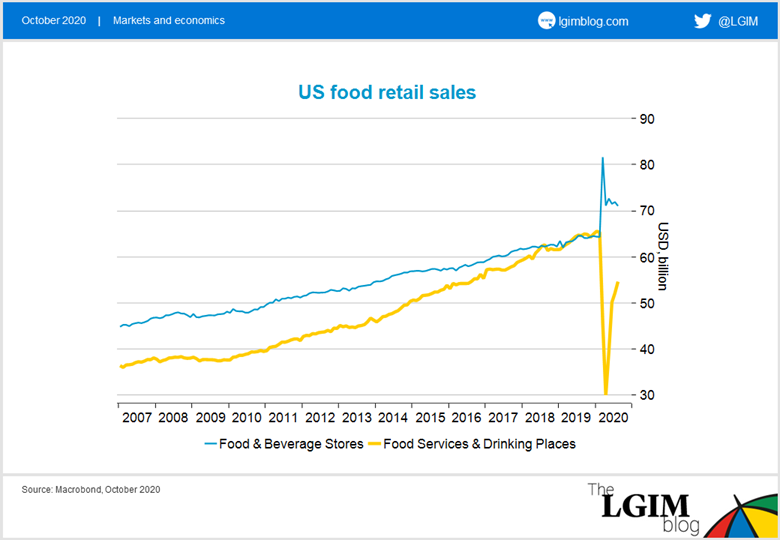 How bad is this for GDP?

In the US, restaurants and drinking locations account for about 12% of retail sales, 5% of consumer spending, and 3.6% of GDP. The gross value added of this sector is 2.2% of GDP, as some of this expenditure is the food component.

In addition, before COVID-19 the food services and drinking sector employed a large number of people – 8% of total non-farm employment – often on low wages. September payrolls show that employment in this sector is currently 10 million people, which is 82% of pre-virus levels and in line with the recovery in sales.

We saw during lockdown there was a big switch away from restaurants and towards buying food and drink from stores, so there could be some multiplier effects as restaurants are forced to close and permanently lay off staff.

Restaurants and bars are not the only activities which tend to switch from outside during summer to indoors by Christmas, but they are the most significant sector. Overall, having contributed to the fast and ‘V-shaped’ initial recovery, food and drinking venues could shave almost half a percent off GDP over the winter under current measures.

The direct impact on the equity market might be harder to see given most of the sector is unlisted, but if restaurants are forced to close as part of an effort to combat a second wave, this could be a significant negative development for risk assets.