The US expansion is becoming quite old by historical standards, but with a little help from the consumer and a more gradual outlook for Fed rate hike rates, it could have some distance to run.

It's my birthday. I like to think I am 18 with 23 years’ experience. To take my mind off the unpalatable truth that most of my previously unrealistic sporting ambitions are now definitely unachievable, I have decided to reflect on how much time there is left for the US expansion, which is having its seventh birthday this quarter.

The average US expansion length (as defined by the National Bureau of Economic Research or NBER) post World War II is not much longer than five years. The last three expansions have averaged eight years. While we don’t subscribe to the idea that business cycles die of old age, the corporate sector is beginning to look weary.

Profits appear to have peaked and margins are likely to come under increasing pressure with lacklustre productivity growth and the economy close to full employment. In addition, there are a number of external shocks I worry about that could derail growth. However, the main reason for believing the expansion still has further to run is the favourable outlook for consumer spending which makes up two-thirds of the US economy. 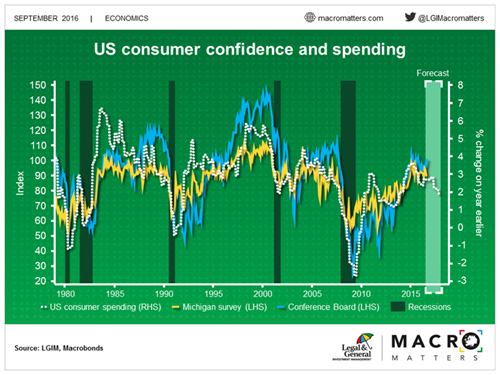 Consumer confidence remains elevated for a number of reasons:

These factors have led to real consumer spending growth of 3% over the last couple of years. One could argue that the labour market is often tight and asset prices high just prior to a recession, and that consumer confidence is more likely to exist at the same time than be a leading indicator. So what about the future?

The outlook for inflation and the Fed is probably the crucial factor determining the length of this business cycle.

I think it is reasonable to expect some moderation in consumer spending, but a sharp slowdown appears unlikely.

I expect the pace of employment growth to slow, with some offset from stronger wage growth, leaving nominal income disposable growth still at around 4%. The boost to real incomes from lower gasoline prices is in the process of fading, with overall inflation rising back towards 2%. This should lead to real income growth of 2%, but not all of the lower energy cost windfall has been spent and so there is scope for the savings rate to fall from current levels. Fiscal policy is unlikely to have much influence on consumer spending, while major tax changes seem unlikely whatever the configuration of Congress or the White House.

The housing cycle should also remain supportive for the consumer. With household formation picking up, lean housing inventories and the level of new construction still relatively low, house prices could continue to rise. This is especially the case since banks have continued to ease lending standards for mortgages.

The outlook for inflation and the Fed is probably the crucial factor  determining the length of this business cycle. Higher rates could expose the fragile US corporate credit cycle (see Yellow card – are we heading for a US recession in 2018?), while a corporate retrenchment would slow household income growth. Higher rates could also deflate asset prices and undermine confidence. However, unlike the last cycle, it would take a much more dramatic rise in interest rates to cause housing distress or make household debt servicing costs significantly more onerous. While most business cycles come to an abrupt end, with the Fed currently in no hurry, this one could age gracefully.