Adding science to investing in an uncertain world

We live in an uncertain world. With Brexit, Chinese growth and US policy just three of countless risks facing the ongoing bull market in risk assets, this is as true today as it ever was. So what’s an investor to do?

Philosopher Bertrand Russell allegedly said that “the objective of science is to teach how to live without certainty, and yet without being paralyzed by hesitation”. In doing so, he inadvertently highlighted an important parallel with the world of investing. There is always uncertainty with investment; the key is to recognise this, but not be paralysed by it.

With markets having had a stellar start to 2018 and sentiment very bullish, many investors appear to have thrown caution to the wind. Economic and financial risks used to be at the forefront of minds, but more recently the big consensus trades – long equities, short bonds and short US dollars – have all worked like a charm.

"There is always uncertainty with investment; the key is to recognise this, but not be paralysed by it"

Discussions in the World Economic Forum have highlighted members’ collective fears that inequality is sparking dangerous social fractures like populism and geopolitical tensions. We couldn’t agree more and have discussed these issues at length in Anger management, Populist allocation and Should investors be worried about US-China relations?

The chart below was first used by Lars Kreckel in early 2017. It shows the different permutations in which increased populism can show itself (and in many cases already has). We see this as an important roadmap for future shifts in policy and expect that these measures will become increasingly popular in the years to come. 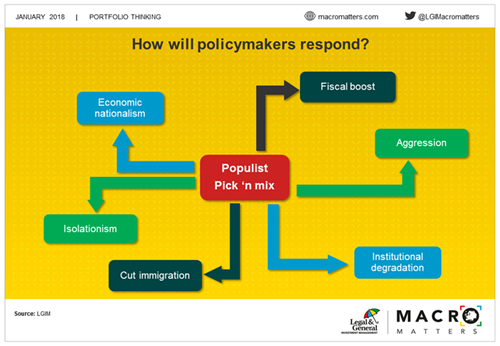 So how can we invest without being paralysed by fear?

In this uncertain and complex world, scenario thinking is an important piece of any investment toolkit. It helps investors to be more proactive, more adaptable to change, and better prepared. It also makes a quick response to adverse outcomes easier and allows action (such as installing hedges) to prevent very negative potential scenarios.

"Scenario thinking is an important piece of any investment toolkit"

We do three kinds of scenario exercises in the Multi-Asset team:

The last of these is to reflect the fact that there is no such thing as a single base case with a very high probability; there is a range of possible outcomes around the base case. This kind of thinking helped us particularly well in case of the EU referendum and the US elections. Even though our base case was wrong, we were well prepared, as discussed in The future ain’t what it used to be.

We believe Bertrand Russell was right. While the saying attributed to him was referring to the world of science, he might as well been talking about investing. And for us, scenario planning helps add science to investing, in an inherently uncertain world.