Should new lockdowns in countries with high vaccination rates make us reconsider the likely path to reopening economies?

Lockdowns are of course still common around the world, but the difference here is that the country had just vaccinated over 60% of its population with two doses. We have also seen other countries, such as Chile and Bahrain, experience rising cases despite high vaccination rates. What Seychelles, Bahrain and Chile have in common is that they have all relied largely on vaccines developed in China.

The suggestion that vaccines may be less effective than hoped is of course a major challenge to the current market narrative. If the risk is specific to the vaccines from China, that would weigh more heavily on emerging markets in particular. Does this pose a significant risk to our bullish view on equities?

We’ve delved into the data from Chile in detail. On first inspection, it doesn’t look good that deaths remained high despite its rapid vaccination programme. But this is probably due to lags in reporting. Chilean trials suggest China’s CoronaVac vaccine doesn’t produce an immune response until two weeks after the second dosage. There was no reported immune response after the first dose.

Given deaths tend to lag infections by 28 days, we wouldn’t expect to see an improvement in Chilean death numbers until the end of April – six weeks after the most vulnerable members of society received their second dosage. This appears to be happening – particularly when we compare deaths with cases.

In January, Chilean deaths peaked three weeks after cases did. This time around, deaths have fallen much quicker, suggesting vaccinations are working. 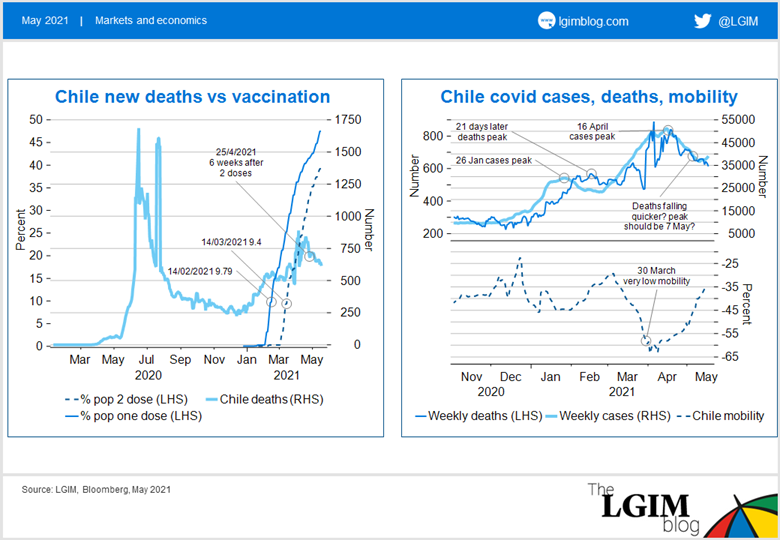 Similarly, in Seychelles the government has indicated that it’s the unvaccinated who are contributing to the rise in severe cases. Only 20% of those who were admitted to hospital for treatment had been vaccinated, but their cases weren't serious. No one who has been vaccinated has died of COVID-19.

We take some comfort from these data from Chile and Seychelles. The tail risk of ineffective vaccines stays at bay for now, and the overall vaccine narrative for equity markets remains positive.

Yet what is evident is that because the emerging world is struggling to keep pace with the developed world on vaccines, we are seeing divergent trends in mobility data between the regions. 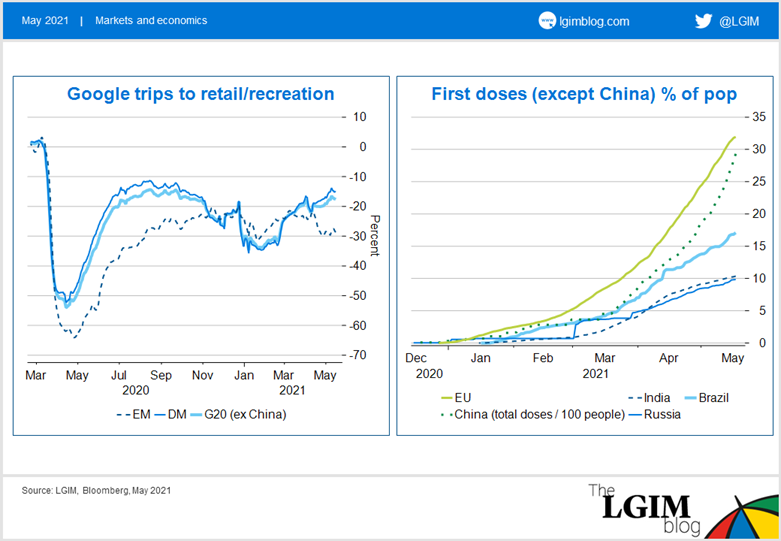 All else equal, slower vaccine rollouts and associated weaker mobility data do lead to us thinking more negatively on emerging-market equities.