A scent of tear gas in the air

I travelled to Santiago de Chile recently, staying close to Plaza Italia. This roundabout turned out to be ground zero for the demonstrations, sparked by a tiny fare increase for subway tickets. In the past few months, the violence has claimed almost 30 lives.

While I was traveling to Santiago de Chile recently, our emerging-markets economist Magda wrote an interesting blog about the Latin American protests. But nothing could prepare me for the first-hand experience. 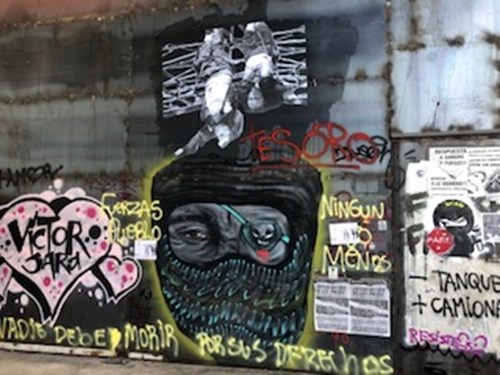 My hotel ended up being close to Plaza Italia, the roundabout which turned out to be ground zero for demonstrations sparked by a tiny increase in the fare for subway tickets. It was the closest I have ever been to what I imagine it is like to be in a war zone: graffiti, windows smashed, shops plundered and burned down, a scent of tear gas in the air, and riot police geared up and ready for a fight.

Every Friday the intensity of the protests mounted dramatically at five or six o’clock, after work. This suggests that it’s not only the poor and unemployed who are protesting; it’s the Chilean middle class joining in.

The flare up of protests has been surprising for global investors, as Chile was a poster child for emerging economies: well run, stable with good institutions, and a strong pension system.

The researcher/investor in me couldn’t resist trying to understand this better. Hence, during my stay I spoke to as many people as possible to question them about the reasons behind these sudden spikes in unrest. All the usual suspects were mentioned: corruption, inequality, limited prospects for progress due to bad education and healthcare, and police brutality. These conversations made clear that Chilean society is full of polarisation, distrust and frustration, consistent with the New Political Paradigm research we in the team have written about extensively.

Since October, the unrest in Santiago has spread abroad to Ecuador, Bolivia and Colombia. But rather than calling this the Latin American spring (after the Arab spring), it’s clear to me that Santiago today could be London, New York or Rome tomorrow as the basic seeds of the protests are universal.

How do we as investors respond?

L&G’s Group CEO Nigel writes passionately about inclusive capitalism and how this could help to turn the tide of frustration and sense of injustice.

We in multi-asset fund management and macro research have a motto when it comes to political events:

We have no greater insight about the day-to-day swings in politics than anyone else. That a seemingly trivial price increase of a subway ticket in Santiago can trigger months of protest illustrates how difficult it is to predict specific events.

Lessons in game theory help. Each political actor reacts to the actions of others. The best choices of one depend on their forecasts of the other’s behaviour and the perceived cost and benefits.

With this in mind, we spend much more of our time thinking through scenarios of various paths and outcomes and their impact on asset prices. This not only makes us better at picking winners and avoiding losers; it helps us be much more nimble in responding to news flow and the eventual outcome. Politics moves in ebbs and flows around the broader trend of a new political paradigm that is emerging.