Could central banks’ decisions in Central Europe provide a template for larger markets?

The latest purchasing managers’ indices (PMIs), for June, were flat to down for emerging markets as renewed lockdowns in Asia put a spanner in the works of the economic recovery. Of the four large emerging countries (Brazil, Russia, India and China), only Brazil’s PMI rose as it recovers from COVID-19.

Elsewhere in the emerging world, we view a sideways-moving PMI reading in Turkey as welcome given elevated inflation there and a large current-account deficit. We are long the Turkish lira, thinking that interest rates close to 20% should be enough to stabilise the currency against the backdrop of high inflation. Yet despite having a central bank to set policy rates, President Erdogan takes every opportunity to share his unorthodox belief that high interest rates cause high inflation, not the other way around. He therefore wants rate cuts to reduce inflation in Turkey. We are staying long the lira for now, clipping the high interest rate, but are very wary of Erdogan’s doctrine and the risk he pushes the central bank to cut rates too early.

Elsewhere, PMIs continued to surge in the three Central European countries known as the CE3 (Czech Republic, Hungary and Poland). 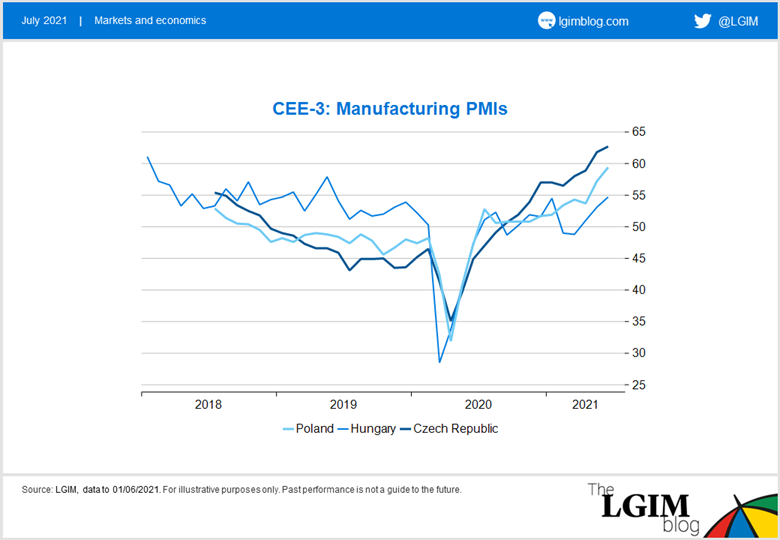 Why do these small countries interest us? We take positions in their assets, so we need to know, but it’s also because smaller countries could provide a template for bigger ones and so have repercussions for global financial markets.

Specifically, CE3 countries have deeply negative real rates, even more so than elsewhere. This may have been appropriate in a time of crisis, but when the economic engine starts firing again, inflation could rear its ugly head stronger and faster, leaving central banks with no choice but to tighten.

The Czech Republic’s fundamentals are strong, in our view, and inflation is above target (with headline inflation close to 3% currently) but we expect it to fall again. The central bank has been proactive and very clear in seeking to hike rates more than once this year. The local yield curve and spreads with other countries reflect this relative hawkishness, and as such we are positioned for Czech spreads to tighten, including against Poland.

The Hungarian and Polish central banks kept on saying loose monetary conditions were appropriate, but with inflation picking up quickly to at-or-above target levels (headline inflation is over 5% in Hungary and over 4% in Poland at the moment), the Hungarian central bank has hiked rates and indicated rates will go up further. We expect something similar will happen in Poland and inflation will probably stay elevated in these two countries for longer. We are long the Polish zloty in anticipation of more rate-hike chatter.

Could larger countries follow suit? We are starting to see similar, albeit more moderate, inflation dynamics in other parts of the world. The re-opening of economies and supply bottlenecks can continue to push inflation higher still. So far, major central banks have repeated the message that inflationary pressures are expected to be transitory and that patience in normalising rates is warranted (so real rates should stay negative). Markets have bought into this message, sending longer-end yields falling again.

However, we believe the CE3 lesson is that when inflation warrants it, central banks won’t hesitate to change their stance quickly. This is not our base case, but a sudden turn by major central banks would upset financial markets. We’ll stay alert.