A common question that arises when discussing decumulation is when investors should choose to annuitise.

This is somewhat complicated. In past blogs and articles I’ve presented various evidence that around the age of 70-80 could be the right time, although clearly it will depend on individuals. In this blog, I hope to give a fuller answer, one that recognises annuitisation doesn’t have to happen all at once! Some degree of annuitisation can make sense even when relatively young.

From a portfolio theory perspective, what ought to drive shifts in asset allocation isn’t so much a change in risk aversion (indeed, that can reduce efficiency) but rather changes in circumstances. So what are the key ways in which circumstances change in retirement?

Mortality drag can be thought of as a headwind faced by investors who don’t hedge longevity risk by buying an annuity. I’ve written about this here. A more positive spin is that annuities offer a ‘longevity credit’ that regular investments don’t. Insurers’ pooling of longevity risk allows those who live longer to benefit from this credit. Longevity credits are essentially created when people die sooner than expected and don’t receive as many pension payments as expected; that money goes into a pool that pays lifetime income to those people who live longer than expected.

It becomes harder to beat an annuity as age increases because, as mortality rates go up, so do longevity credits. Allowing for these credits, the expected return on income drawdown falls relative to that from an annuity. Eventually it becomes negative, which – bequests aside (I’ll come back to that!) – puts a limit on how long to wait before full annuitisation.

However, an important point is that there’s no cliff edge: annuities gradually become more attractive as mortality rates edge upwards. The chart below gives example glidepaths under a model I built.* This shows how the gradual phasing out of income drawdown and into an annuity is ideal in theory. Of course, smooth annuitisation is not practical in general, and might also incur greater costs (e.g. due to administration expenses). A staggered approach, perhaps annuitising in chunks every five years, might be more sensible. 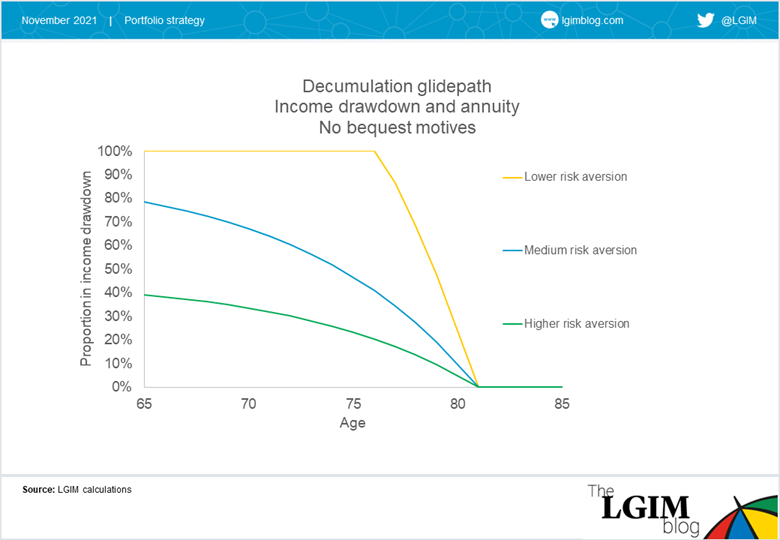 A key challenge annuities face is the ‘bus problem’: investors are worried that if their retirement is cut short (perhaps due to an altercation with a bus), they will leave no assets behind.

One approach is to say that there is some benefit to income drawdown, in the form of bequests, that offsets mortality drag. For example, if you care about bequests as much as you care about the risk of running out of money in retirement, you might halve all the mortality drags (or longevity credits) that feed into the glidepath optimisation. In the chart below we show how the glidepath shifts on making such an adjustment. 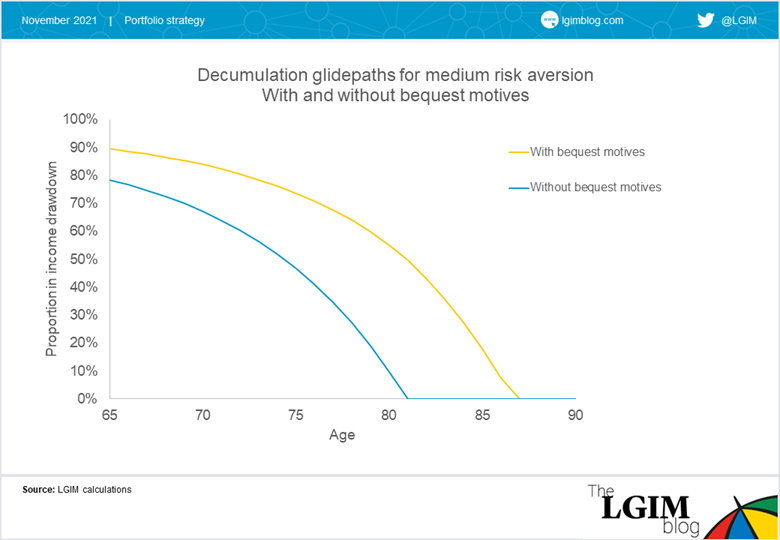 In practice, bequest motives could change over time. For example, a spouse may die, which could reduce bequest motives. But investors should bear in mind that annuitisation is irreversible, so taking more risk is not an option should bequest preferences move in the other direction.

For simplicity, the glidepaths above assume you can only invest in two products: an income-drawdown fund or an annuity. However, there is nothing stopping investors using more than two and changing their equity/bond mix within income drawdown as they age. Indeed, when I allowed for this flexibility, I found that the glidepaths do something interesting: they disinvest out of bonds (into annuities) first, before they disinvest out of equities. You can see this below: 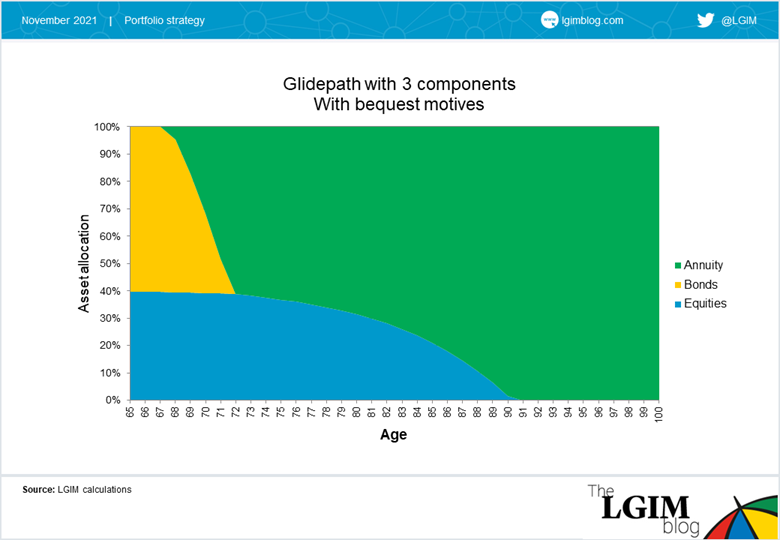 Why is this? Well, an annuity can be thought of as a combination of bond exposure and longevity insurance. If you swap the bonds in income drawdown for an annuity, you still have the bond exposure but now hedge longevity risk too. However, factors such as a risk premium on corporate bonds and bequest motives can still mean that holding some bonds makes sense for a while.

There are a range of other factors to consider. Wider assets such as a defined-benefit and/or state pension could influence decision making. The choice of annuity indexation can matter. There may also be a greater desire for simplicity in old age, which may encourage annuitisation.

Many paths to annuitisation

Other than for those treating their defined-contribution and retail savings purely as an inheritance vehicle, I find that annuities eventually win out. However, exactly what the transition looks like depends on a range of factors. Understanding their influence can help investors build better glidepaths.