Unlike their US or Eurozone counterparts, UK pension funds will readily pay quite a premium for inflation protection. However, that premium is relatively unattractive for multi-asset investors, who we think can find better ways to manage UK and global inflation risks.

In inflation markets, the UK stands apart from the Eurozone, US and Japan. This is a disconnect we have discussed previously in Spot the Odd One Out. A year and a half later, the UK is still the only place where the market-implied expectations for future inflation are above its central bank’s target.

We don’t believe this reflects a significant difference in the UK inflation outlook, but rather a market distortion caused by the unstoppable march of UK defined benefit pension schemes derisking and hedging their inflation-linked liabilities. Generally, this makes UK inflation-linked bonds less attractive for multi-asset investors, who can find alternative sources of inflation protection.

Central bank inflation targets differ. For example, the Bank of England and European Central Bank target the consumer price index (CPI), while the US Federal Reserve focuses on Personal Consumption Expenditures (PCE). To make things more complex, UK and US inflation markets focus on the retail price index (RPI) and CPI respectively, which are different from the official central bank objectives.

There’s a lot of debate about the size of the wedges between RPI and CPI in the UK as well as PCE and CPI in the US. However, the exact magnitude doesn’t change the broader picture. Markets imply that that the Bank of England will miss its inflation target by about 0.6-0.7% per annum over thirty years, while both the US and Europe will undershoot their targets by about 0.3-0.4%. 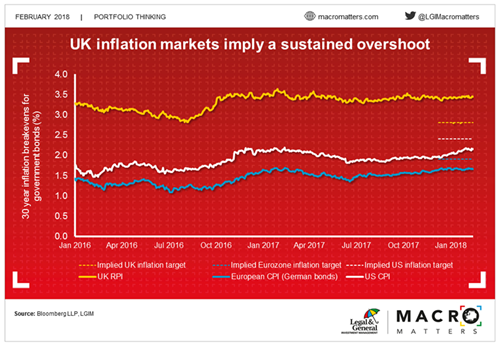 It’s unlikely that investors could have enough conviction about the next 30 years to justify those differences. Instead, we believe the main driver is the systematic derisking of over £1,500 billion of UK defined benefit liabilities. The main driver for these investors is to manage risk and, as such, they’re prepared to pay quite a premium to hedge their future inflation-linked pension liabilities.

For global, multi-asset investors like us, there are other ways to manage both the UK-specific risks that might lead to higher inflation and also that of a global reflation scenario. In the former case, exposure to overseas currencies acts as a partial hedge to sustained UK inflation as that would tend to cause sterling to weaken. In the latter case, given it’s a broader, global reflationary story we’re concerned about, then we can buy inflation exposure in other regions that we think are more attractive, such as the US currently.