The quest for resilience in a fragile world

Russia's invasion of Ukraine, and central bank back-peddling in the face of surging inflation, create significant uncertainties for investors. But that does not mean the market outlook must be gloomy.

Just as the 2008 crisis exposed the fragility of the financial system, the pandemic revealed that of the non-financial system – and now the war in Ukraine has highlighted geopolitical vulnerabilities.

The latter conflict, together with the reluctant acknowledgement from central banks they are woefully behind the interest-rate curve, has stoked the worst quarterly drawdown in bond indices in over 30 years. 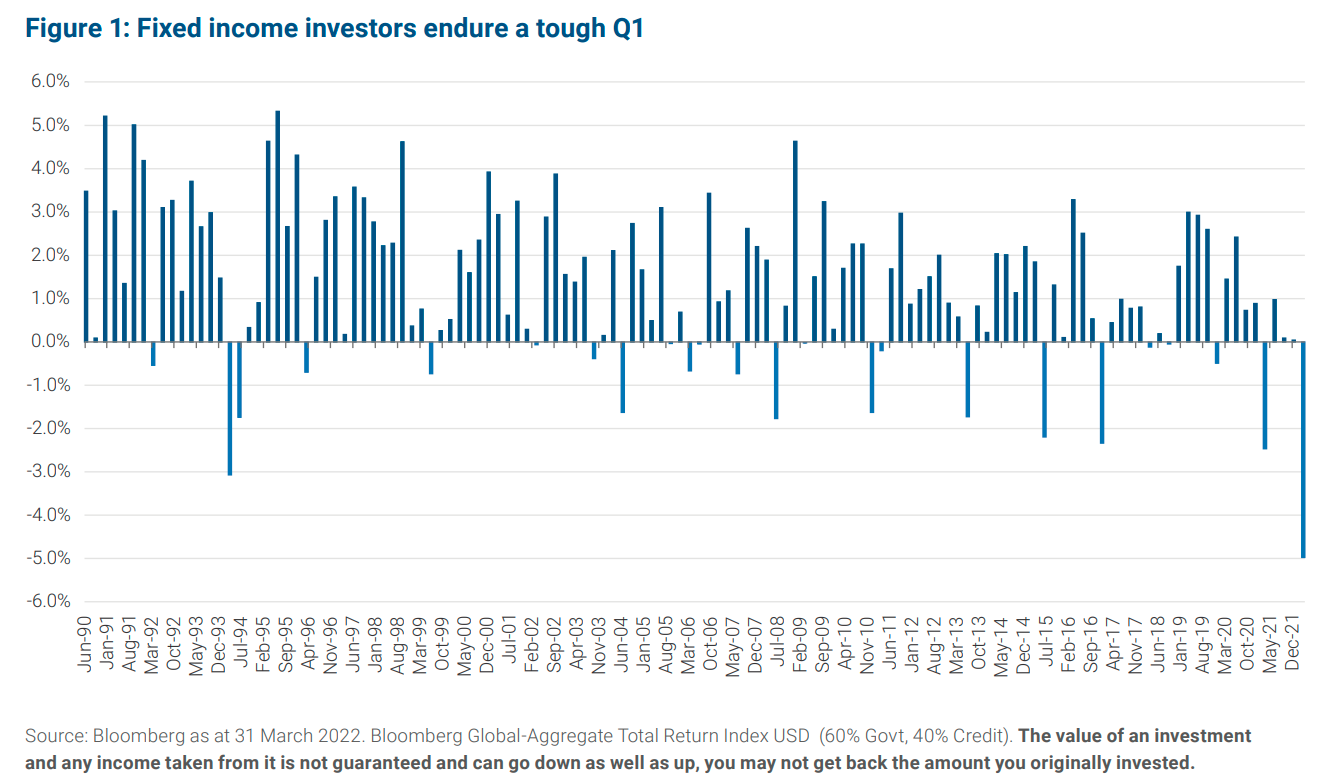 Given that the threat of inflation has been with us for some time now, investors had been relatively relaxed that the issue would prove ‘transitory’ in nature. This was the reason why 10-year US Treasury yields could finish 2021 at only 1.5%, while core CPI rose to 5.5%.

But fixed-income markets have been forced to wake up to this inconsistency this year. The Russia-Ukraine conflict has further added to the inflationary impulse through the weaponisation of energy prices, especially European gas.

The central bank scramble to restore credibility has been another significant source of volatility. The forward interest-rate market is currently priced for eight to nine further hikes by end this year from the US Federal Reserve (Fed), implying two or three 50bps moves; five to six more hikes from the Bank of England; and two hikes from the European Central Bank.

This dramatic repricing has been most felt in the shorter maturity areas of yield curves, as two-year yields have moved to a level higher than their 10-year equivalents. And the brief inversion of the two-year/ten-year yield curve is seen as a long-trusted indicator that recession is now on the horizon – and investors will be looking to position for it.

The case for optimism

But we’re not so sure. If the hostilities in Ukraine can be de-escalated, we believe there is still strong underlying demand in a post-pandemic world.

We have to acknowledge the concern around the pace of central bank rate increases now factored into valuations. If fixed-income investors, in particular, simply cannot get comfortable with the path to higher rates, then we will likely witness a more significant tightening of financial conditions via the credit channel. This could threaten further economic expansion.

However, if markets can see a ‘demonstration’ over the coming months that economies can actually cope with higher rates, the cycle could be extended. In the US, for example, 10-year yields are still well below levels seen in 2018, while the economy is in much better shape today than it was back then.

Part of what could draw out the cycle is the high likelihood of inflation relief at some stage in the next 12-18 months. A potentially significant slowdown would give the Fed some leeway to temper the pace of rate increases. Not to stop the hikes – and certainly not to reverse them – but pause a little to assess the impact of what they have already done.

In addition, decelerating inflation would be a big support for consumers, assuming ongoing solid nominal wage growth. Household labour income growth over the four quarters to December was about 9%, but only some 3% after inflation. The nominal growth rate will almost certainly slow, but if inflation slows at least as fast, real aggregate labour income will be maintained at robust levels.

If markets can find relative calm under this scenario, existing behaviours will probably reassert themselves. An area we are watching closely is corporate investment intentions. Company management teams have a once-in-a-decade opportunity to raise prices and invest while growth is higher than interest rates. Given challenges with labour costs, should companies embark on capex that alleviates cost pressures – as appears to be underway – this could be very positive for equity valuations.

As we have consistently highlighted, the pandemic has accelerated many existing trends. The current war will further amplify some, while introducing others. We expect to see more onshoring, more diversification of supply, higher inventories and the balkanisation of certain sensitive industries.

Big questions remain, though. Following the sanctioning of the Russian central bank, what are the implications for central bank reserves? And how might environmental, social and governance factors, and the mega-trend of responsible investing, be redefined in this environment?

Our upcoming Spring CIO update will be dedicated to the longer-term implications of the Russia-Ukraine war, the first conflict in the new multi-polar world we have entered. The world is not what it was.