Stay calm and climb the wall of worry?

Given the prevailing market risks, how can I justify maintaining my high exposure to equities?

The S&P 500 has, as I write this, passed more than 200 days without a 5% pullback. On average, it suffers such a loss three times each year. This year it has instead hit 53 new all-time highs, so is it time to think about when the market might return to something more like its historical patterns after such a prolonged rally?

Perhaps – but first it’s worth acknowledging the good reasons for this strong performance. The S&P 500 had record earnings per share in the second quarter, with record profit margins of 13.6% to match. 87% of companies beat analyst estimates on sales, and 88% on earnings. For me, these results reflect how Wall Street underestimated the extent of the economic recovery.

Yet it’s possible the consensus could now swing too far in the opposite direction. Great results are pushing equities forward, but are also setting the bar higher for the next quarter as analysts revise their estimates significantly upwards. This might also mean the cyclical companies that benefited the most from the early stages of recovery will be caught in the ‘peak growth’ story – with numbers better than expected, but a declining growth rate. And if elevated estimates are fully priced but growth rates moderate, valuations might come under pressure.

In addition, significant macro risks have been on investors’ minds for months now. These include inflation, central banks tapering asset purchases, China and emerging markets slowing down, the Delta variant, and supply-chain disruptions.

The big question is: is the game about to change enough to take some chips off the table? Let me share a very brief view on what I consider the two main risk factors, before I give my own answer to that question.

In the great inflation debate, there are renowned financial names on both sides of the argument. They’ve laid out their perspectives clearly, and I won’t elaborate on them here. What I will say is that ‘transitory’ inflation that lasts two or three years is an oxymoron. We are, in my view, in a period of higher inflation. The questions are where it goes from here, and how it impacts asset allocation.

If you’re in either of the “we’ve seen peak inflation” or “the worst is yet to come” camps, I think equities are the place to be. If you’re in the hyperinflation camp, I’m afraid you may find my arguments inadequate so it may be better to spend time digging that hole in the backyard for physical gold.

Labour costs are increasing globally, and real wages have a chance to go up for the first time in over a decade. There is pressure to increase pay for drivers, in manufacturing, and in professional services. Unfortunately, at the same time we have structural unemployment. In the US, there are nearly 11 million job openings and over 8 million unemployed; nearly 40% of them had previously been employed in either the travel or leisure sectors. The inflation narrative should nevertheless drive demand for reflation assets, and equities have historically fallen into that category.

At Jackson Hole this summer, Federal Reserve (Fed) chair Jay Powell repeated the mantra that it could be appropriate to start reducing the pace of asset purchases this year.

Contrary to the street’s view, though, the bigger risk may be that the Fed doesn’t taper this year after the disappointing August jobs report. This would put more pressure on the Fed’s decision next year, and probably increase the likelihood of a policy mistake (like not slowing quantitative easing earlier and then slamming on the brakes later). This could also increase the risk of an abrupt reconciliation of overstretched valuations, which thus far have arguably been fuelled by the constant flow of liquidity. Such a correction would instil fear in a vulnerable, recovering economy.

However, I expect Powell to remember the lessons from the market’s post-tapering shakeout in 2018. Any tapering should therefore be moderate, which I don’t think equity investors should fear. Ultimately, equity returns now seem more driven by recovering earnings, yields, and TINA (‘there is no alternative’). 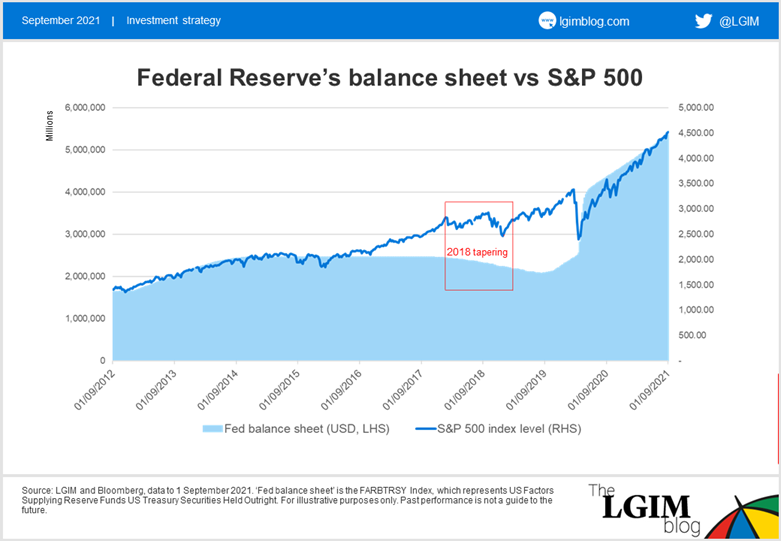 As an equity investor, then, I do recognise increasing risks to this rally. They deserve more consideration than the few paragraphs I have sketched out above. Corrections are inevitable and the next one is long overdue, but it’s difficult to be pessimistic given macro conditions and a market that buys every dip.

Even if you do jump off the equity train, you would later need to make the even more difficult decision about when to get back in. Waiting for the right moment, given the current strong momentum in stocks, could be extremely painful. Despite the aforementioned risks, equities could still steam ahead.

So given the improving fundamentals, recovering economy, and still-supportive monetary policy, I calmly maintain my significant exposure to equities – especially thematic investments that should be supported by secular trends, as my colleague has argued – and climb the wall of worry.

Now an ETF Portfolio Manager at LGIM, Karol has seven years’ experience in portfolio management. Prior to joining the team in 2019, he worked at Deutsche Asset Management (later DWS), where for four years he helped to manage ETFs as an Assistant Portfolio Manager. Karol holds an MSc in Investments with Distinction from the University of Birmingham, a BSc degree in Economics, a BSc in Financial Management, and a BA in Business. In his spare time, he enjoys travelling, reading and engaging debates on challenging topics. 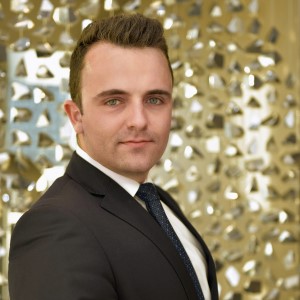