Stand aside, economists; send me a meteorologist

The largest central banks may expect the inflation storm to pass, but they can’t predict the weather – which may have important implications for commodity prices, inflation, and multi-asset investors.

The major central-bank players continued singing from the same hymn sheet last week. “These effects have been larger and longer-lasting than anticipated, but they will abate,” Federal Reserve Chairman Jerome Powell said in testimony to the Senate Banking Committee released last Monday. “Our view is that the price pressures will be transient,” Bank of England Governor Andrew Bailey said in a speech the same day. “The key challenge is to ensure that we do not overreact to transitory supply shocks,” added European Central Bank President Christine Lagarde the following day.

Can we be confident that the inflation pressures will roll over as anticipated? An old joke is that the role of weather forecasts is to make economic forecasts look good. But we’re going to be unusually reliant on meteorologists in the months ahead, as the inflation outlook is set to be dominated by what happens on commodity markets. US and European natural-gas futures rose by 35% and 90% respectively in September. Prices have become phenomenally volatile intraday: rising, and then falling, 40% in a single trading day on 6 October. Another ‘polar vortex’ driving up demand for heating over the winter could send prices spinning further into the stratosphere. A mild winter, coupled with a supply response, could see prices collapse.

Not everyone agrees that inflation is a purely transitory phenomenon. The Czech National Bank delivered a mighty 75 basis point increase in policy rates, with Governor Jiri Rusnok citing an overheating labour market and upside risks to inflation. Perhaps even more dramatically, the Polish National Bank followed suit with a shock 40 basis point increase in policy rates. Governor Adam Glapinski, who was telling the world a few weeks ago that inflation was purely driven by base effects and fuel prices, now speaks of an inflation profile that is “higher and longer” than previously supposed.

The rising fear of inflation has driven a decent move higher in bond yields everywhere. The usual suspects have been cited as accelerants: convexity paying from mortgage-backed securities (MBS) investors, the weight of corporate issuance, the prospect of the Federal Reserve tapering asset purchases, and trend-following strategies (otherwise known as CTAs) jumping on the move. The fundamental link between inflation and bond yields is not complicated: holding assets with fixed nominal cashflows is unlikely to be a good idea when prices are rising rapidly. We’re tactically short duration, partly in anticipation of that pivot to focus more on inflation concerns among the major central banks.

But the impact of inflation on equities is more subtle. The equity risk premium may be driven higher (i.e. equity multiples driven lower) in the face of higher inflation concerns, but revenues are also likely to be stronger than would otherwise be the case. At the end of the day, equities are a real asset. We’re still bullish over the medium term on equities despite the inflation threat. For us, the bigger picture on equities is that recession risk remains on the distant horizon.

However, any portfolio is more than the sum of its parts due to diversification. In the multi-asset world, we need to be particularly mindful of a potential change to the equity/bond relationship of the past decade. It looks highly suspicious to claim that bonds are acting as an accelerator of the equity selloff given that the year-to-date correlation is almost exactly zero (see chart below). It was only in the first quarter that we saw high-frequency evidence that bonds were actively undermining equity returns. But a zero correlation is still problematic. 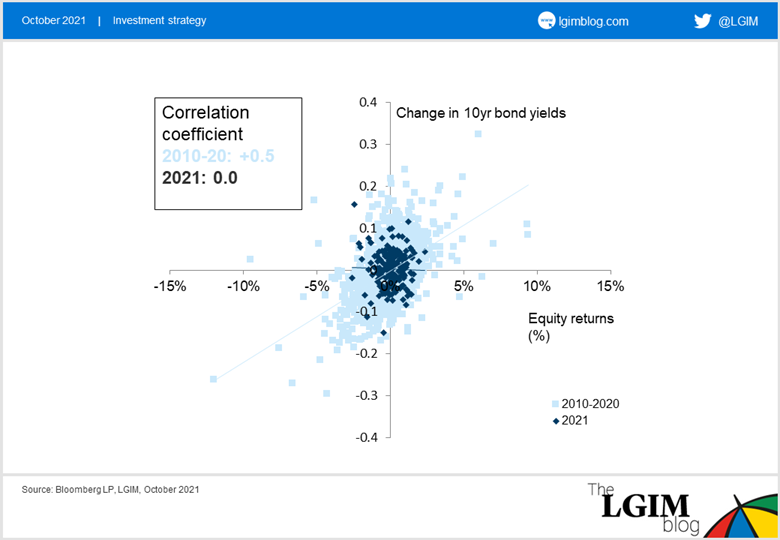 It is hard to argue that bonds offer much compensation for risk: most estimates of the term premium are very close to zero today. In that case, the argument for holding government bonds over cash rests solely on their ability to mitigate other portfolio risks. From 2010-20, that insurance effect was apparent in the high-frequency data. This year, as we see below, it’s been consistently missing in action. 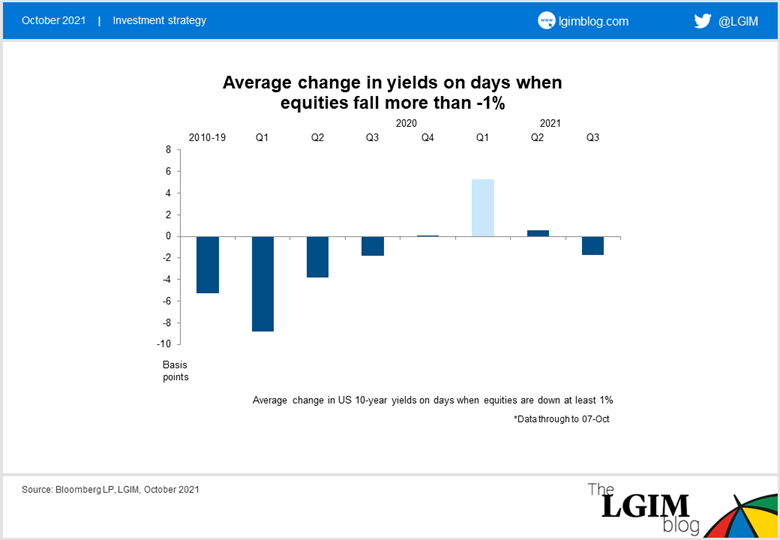