Regardless of intention, I think a lot of the commentary on active management performance is misleading. High or low success rates for active managers are far too often explained in nonsensical ways. In fact, there are just four main options in my view and three of these likely explain the anomaly in small-cap equities.

If a group of people own all the investments in a particular asset class, such as UK equities, and actively trade them, then the average pound of investment will return less than a market-cap index for that asset class on account of the trading costs. In addition, if the asset owners pay others to manage them, then those fees are also a drag on average performance.

So when it’s reported that the average manager has achieved a higher return than the index, net of fees, then it must be that the conditions above have broken down. For example, it was recently reported that about 60% of International Small-Cap Funds had outperformed over five years. The options are as follows, and if it’s not captured by this list then I think it is likely fake news. 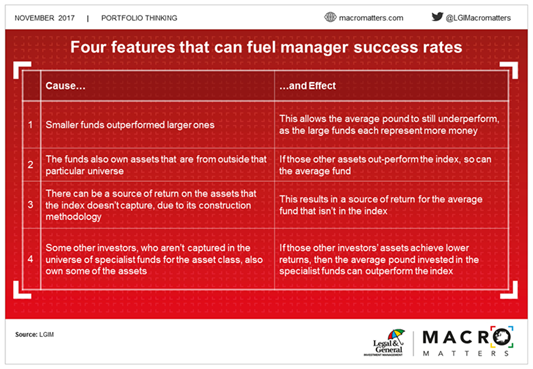 In the case of the outperformance of International Small-Cap Equities, as defined in the SPIVA report, it’s most likely a combination of (2), (3) and (4).

The funds own assets from outside the small-cap universe: Small-cap managers will often own 'micro stocks', which are too small to be in the index and so if they outperform that will help the average manager.

There’s a significant source of return not captured by the index: IPOs and other new capital raisings won’t be captured immediately in the index. Therefore if those assets outperform before their new weights are reflected in the index, they improve the average manager return.

To test my theory on small-cap, I ran it past Rod Oscroft who’s our Co-Head of Equities and has managed UK small-cap strategies for over 20 years. He agreed with the broad concept and thought it was likely that the primary cause was micro-cap purchases by smaller company managers, while there are fewer large-cap managers dabbling in smaller companies now than has historically been the case.

If the proportion beating the index deviates from what we might generally expect to see then I think the reasons are actually pretty limited. By sticking to the reasons above, rather than being confused by fake news, I believe investors have a better chance of making the right decisions on which funds to buy and at what price.

In the final instalment of a trilogy on success rates of active managers, and how fund selectors can interpret them, I’ll apply the same framework to fixed-income, where success rates again stand out, but the reasons are quite different.