Joe Biden, fiscal talks and the outlook for risk assets

On balance, we think the macro backdrop appears supportive for risky assets over the coming three months, with a bias towards higher government bond yields.

Last week, we got together as an investment team to discuss the market outlook, as we do once every month. The key near-term drivers are probably US fiscal negotiations and the presidential election on 3 November.

Of course, the two are linked: the chance of a pre-election fiscal agreement is diminishing, but polls are increasingly pointing to a Democratic Party sweep, which could usher in a large fiscal package in the new year.

Many investors have already come to this conclusion, with US Treasury yields edging higher and risk assets rallying in anticipation of eventual fiscal support. As long as the yield move doesn’t accelerate, and assuming the US dollar doesn’t appreciate significantly, then we suspect this positive trend for equities and credit can continue.

Of course, the election outcome is far from certain, and the possibility of a split or a contested result could delay fiscal support (this would probably be the worst outcome for equity and credit markets, in our view). There are also near-term downside risks for growth as current fiscal support rolls off and rising COVID-19 infection rates in parts of the US and Europe lead to economic restrictions.

Scarring has already been apparent in the form of higher unemployment and corporate bankruptcies – we are watchful regarding tighter credit conditions and a permanent increase in people’s desire to save. But this risk is offset to some degree by a reasonable near-term outlook for emerging markets, notably China.

There are also significant longer-term risks to the Democratic sweep scenario with the threat of higher corporate taxes and increased regulation. Indeed, this is behind Lars’s assessment of such a scenario having a mild negative impact on US equity markets.

(For a view on what a Biden administration could mean for the oil and gas industry in particular, it’s worth listening to our latest CIO call, when we discussed the potentially significant geopolitical and regulatory implications of a Democratic win.)

There is also a risk that the Democrats announce a large fiscal package just as vaccines become widely available. This could lead to a sudden increase in growth and inflation expectations with a destabilising spike in Treasury yields, which are already extremely low, alongside other core government rates, as the chart below shows. 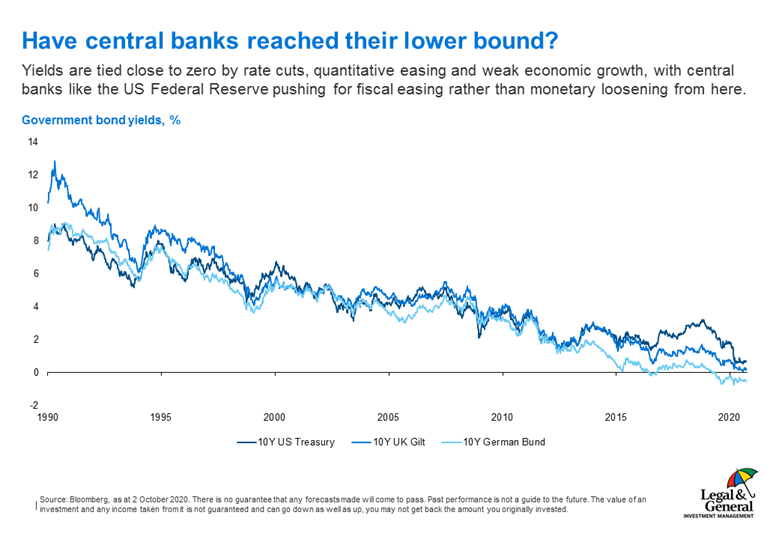 Under this scenario, though, we believe central banks would likely try to suppress such volatility. And, focusing on the coming three months, on balance we think the macro backdrop appears supportive for risky assets, with a bias towards higher government bond yields.