It’s all about the data

Data analysis has transformed the worlds of sports and investments alike. It is crucial in managing an investment process and team, to understand our strengths and weaknesses and to evolve and improve over time.

I love the book and film Moneyball. If you haven’t read or seen it, I really recommend it. It’s based on the true story of Billy Beane – general manager of the Oakland Athletics baseball team, played by Brad Pitt in the film – building a competitive squad with a very limited budget. His revolutionary approach is to identify undervalued talent by taking a quantitative approach to scouting, analysing and trading players.

We follow the Athletics as they achieve a record-breaking 20-game winning streak; they reached the playoffs in four consecutive years. Their success transformed baseball, and many other professional sports have since followed in their path. Data analysis and quantitative research became a crucial input for talent management, training methods and game-day strategy. Though a laggard for many years, professional football is now also waking up to the reality that science wins games; just recently Manchester City hired an astrophysicist to head a team of data analysts.

I like to see myself as a follower of Billy Beane, although Mrs van den Heiligenberg believes I’m better looking than Brad Pitt (at least that’s what she tells me). Data analysis plays an important role in many aspects of managing an investment team, but in this blog I would like to focus on how it influences our tactical investment process and how I use data to manage that process.

Many investors will have come across Grinold’s “Fundamental Law of Active Management”, which shows the relationship between risk-adjusted returns (information ratio), skill (information coefficient), and breadth (number of independent bets in a year).

We have a team-based approach and focus on holistic risk management, whereby we manage overall portfolio risk according to factors rather than managing the risk of individual positions.

Within that framework, we aim to have about 25 to 30 different live tactical strategies at any given time. Above that level, the quality (or hit ratio) of the ideas might suffer and the risks might become too difficult to oversee; below it, and the portfolio could become too concentrated and idiosyncratic in its behaviour. Not all our portfolios will implement all the trades; it will depend on their objectives and constraints, but our most active approaches will.

Many of our statistics are quantitatively backed, but this one in particular is more of an art than a science; over the past 20 years I have figured out this number works for me and my teams.

To determine what that means for the number of ideas we need to generate to reach 25-30 live tactical strategies, we have to understand two things: the investment horizon of our trades, and the percentage of trades that makes it into a portfolio.

Looking beyond the horizon

To start with the former, contrary to some other unconstrained multi-asset managers, we are not hung up on a specific horizon. I believe edges for making money emerge over different time horizons and it would be an unnecessary and costly limitation of talent and creativity to limit oneself to a certain horizon. Indeed, having a variety of ideas and investment horizons can actually help in achieving portfolio diversification. The only limitation that makes sense in my opinion is generally to avoid short-term, intraday horizons, as I believe others – like proprietary traders – have much better information for playing in that field.

The modal, median and mean time horizons for our strategies are respectively two months, five months and eight months, so there is a clear mix. Our longest, more thematic trades are held in portfolios for longer than two to three years (like what we see as the underappreciation of future earnings growth in technology stocks), but most of our tactical trades aim to play a fundamental mispricing of an asset that corrects relatively quickly (say, over two months, like a typical currency pair trade based on the different expected reaction functions of the two relevant central banks).

The mean time horizon of eight months means we need about 40 trade ideas a year to make it into the portfolio, or one new idea every six to seven days. However, not all ideas make it into portfolio; the majority don’t. In fact, less than half of the ideas put forward by the team make it through to a portfolio.

From idea to ideal

Ideas need to be scored over seven factors (fundamentals, value, carry, market dynamics, ESG, diversification, and tail risk) and undergo peer challenge. It is up to me to drive the team in a way that enough new ideas are being proposed for us to research, create conviction, and ultimately make it into our portfolios. The table below shows our average number of trades tends to be above that each year.

We are in a results business, and financial markets are prone to uncertainty, so good ideas can still lose money. If we consistently lose money on brilliant ideas, we would provide a disservice to our clients. So the hit rate – the percentage of trades that make a profit divided by the total number of trades – is something we carefully monitor as well. Research and my personal experience suggest a 55% hit ratio is quite good; a 60% hit ratio is exceptional. If maintained for a long period, both have the potential to deliver top-quartile performance.

The table below, based on our own internal analysis, indicates we have been able to achieve a hit ratio of 64% over the past six years, spanning over more than 300 strategies. Our lowest year hit a still respectable 53%, and our best year clocked a stunning 76%.

There is nevertheless room for improvement. Our win/loss ratio is below 100%, which means our losers tend to be bigger than our winners. Though we work hard being better at this – for instance in setting clear exit signposts for each trade – we think it is attributable to our investment philosophy of being contrarian and value oriented (so when prices decrease, the trade becomes more attractive to us). 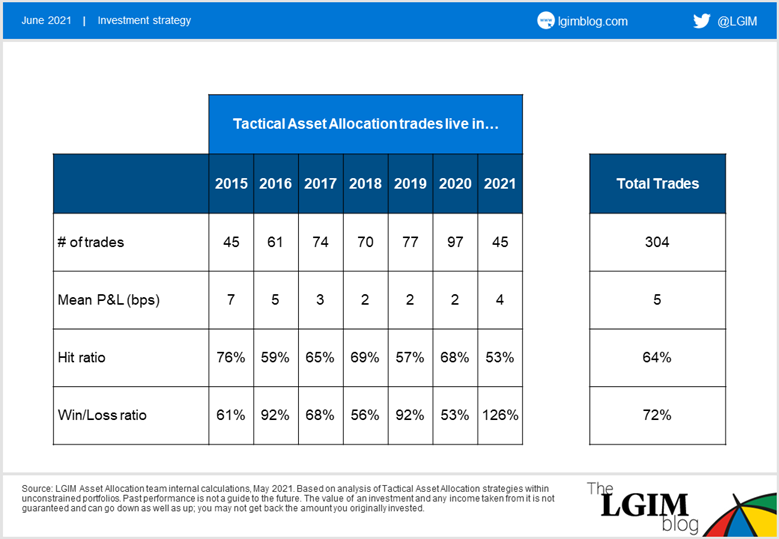 Finally, there is one more point to highlight: the factor loadings of our tactical trades. Do trades have a persistent correlation or beta with, for instance, equity or bond markets?

This is important because I want to identify our skill in alpha generation. Constant exposure to proven risk premia is a sound long-term investment strategy, in our view, but it doesn’t show skill in tactical idea generation as investors should expect to be rewarded for that risk. Hence Grinold talks about breadth as the number of independent bets. Again, our numbers over the past five years look pretty favourable here: with these strategies, we have established a correlation to equity markets of only 0.27 and a beta of just 0.09, and a correlation to bond markets of -0.44 and a beta of -0.11.

In baseball, players had historically been assessed by scouts based on subjective criteria. Billy Beane was able to boil player performance data down into a model that showed the number of wins, runs scored, and runs allowed required for the team to make the playoffs. It was different, it was factual, and it allowed the general manager to make hard decisions to create top performance.

Applying that mindset to our own data tells us that our tactical trades have added significant value in the unconstrained funds where we implemented them, without adding much additional factor exposure. This is what we set out to do and it’s great the data confirm that.

Past performance is not a guide to the future. The value of an investment and any income taken from it is not guaranteed and can go down as well as up; you may not get back the amount you originally invested.