Europe: the final countdown (to reopening)

The market may be underestimating how quickly the EU could catch up with other vaccination programmes, and so return to economic normality.

Early last year, before the severity of the pandemic became clear and before lockdowns were imposed, we spoke and wrote a lot about COVID-19. Similarly, when restrictions began to ease in May, we were concerned about new waves of the virus.

Our interest isn’t just as amateur epidemiologists or professional doom-mongers; as investors, we had to prepare for the possibility that the market was mispricing major risks. To do so, we question whether the consensus narrative and the relevant data are aligned.

Today, with many vaccination programmes gathering pace and seeming effective, we therefore spend less time discussing the virus as the optimistic sentiment does seem to be supported by the facts on the ground. This means we can focus on other areas where there is a greater disconnect between market perception and reality, inflation and the economy’s place in the cycle being just two examples.

That said, we can’t ignore developments around COVID-19 and vaccines entirely. Indeed, they have featured more heavily in our debates and in the market’s commentary over the past few days.

The news remains broadly encouraging. The US, where nearly 50% of adults have had their first dose of a vaccine and 25% are now fully vaccinated, powers on with about 6.5% of the population receiving a shot each week, split evenly between first and second injections. Even after use of the Johnson & Johnson vaccine was paused this week, the White House swiftly expressed confidence that other suppliers could meet demand by the end of May.

In the UK, where lockdown measures were further loosened this week, the government and media have emphasised positive trends on people getting their second jab, although the overall vaccination rate has slipped of late to just 3.5% of the population per week (and only 0.9% getting their first dose). Nevertheless, about 60% of adults have now had at least their first shot.

While there are still risks to reopening in both cases, the likelihood is that the vaccinations will win out in the race against another spike in deaths and hospitalisations. 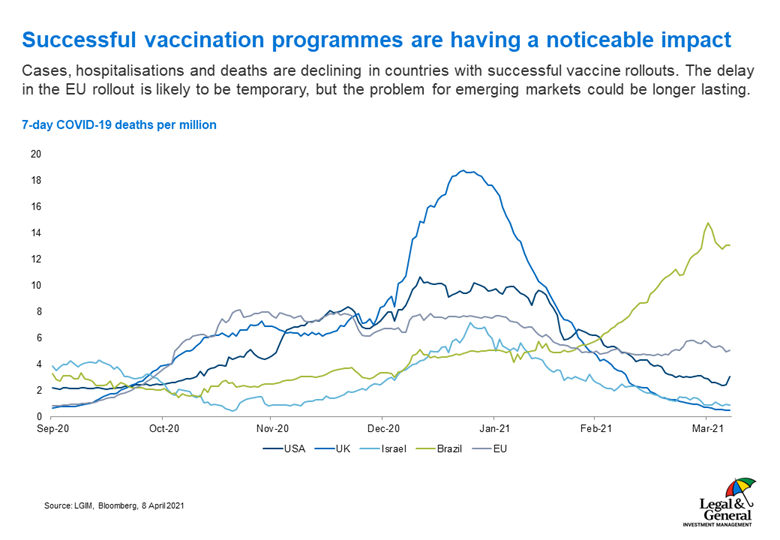 Inevitably then, there’s a lot of attention on the European Union, where only about 25% of adults have received their initial vaccine dose. It was always likely that the more infectious variant that was first identified in the UK would become the dominant strain across the continent, and unfortunately that’s led to further lockdowns, so the question is when Europe will be able to reopen – and whether that has been accurately priced in by markets yet.

We believe that, despite the disappointing progress so far and fairly hostile coverage in the British press, the EU is in fact poised to accelerate its vaccinate programme rapidly and will likely be two months or fewer behind on its journey.

Alongside some more surprising stories, like Bavaria buying the Sputnik V vaccine, the past week has brought the highest vaccination rate yet at circa 3% of the population. On a rolling seven-day average, that represents a 10% pickup versus a week ago.

Moreover, Germany has now outlined its potential to vaccinate 12.5% of its population a week once the supplies are available; my colleague Martin Dietz estimates German deliveries at 16.6 million doses in April across four different vaccine providers.

To catch the US up over two months, the EU would need to vaccinate about 4.5% of the population a week. Given the diversified sources of supply Europe is employing, that looks very achievable.

So, on balance, Europe could be another source of positive surprises this quarter. We believe this is supportive of both our travel and leisure equity position and broader positive equity view.