Does your index have a ludicrous mode?

The recent decision not to include Tesla in the S&P 500 highlights the importance of understanding the methodologies of index strategies.

S&P 500 investors’ long wait to own a Tesla* goes on – in their index fund if not their garage. Despite some hopes that the electric carmaker would be added to the S&P 500 this month, it is set to remain outside that basket of stocks for a while longer.

Given that Tesla started this month as one of the 10 largest public companies in the US – bigger by market capitalisation than the likes of JPMorgan Chase*, Walt Disney*, or Netflix* – this omission from a list of 500 American large-caps may seem odd.

But, as many investors will know, the S&P 500 is not formed solely on the basis of market capitalisation. Its composition is instead determined by an index committee that makes qualitative as well as quantitative judgements. It is also worth noting that additions to the S&P index series would typically only occur as replacements for exiting members being removed (usually due to acquisitions) rather than automatically, following satisfaction of the eligibility criteria.

Tesla’s exclusion has historically been because it failed an inclusion criterion requiring that the sum of the most recent four consecutive quarters’ profit – as well as the most recent quarter – should be positive. The company has now passed that requirement and yet still remains outside the index. Given the decision, the onus is now on Tesla to maintain its profitability to remain under consideration for S&P inclusion.

Our view is that this demonstration of consistent profitability may have been the intention of the index committee and that it is a sensible precaution in order to manage any perception of their inclusion criteria being manipulated, particularly for any company whose CEO compensation package has been so publicly linked to the stock price performance (see table). The value of the index-inclusion effect can be seen in the significant 21% price fall on the news that Tesla would not be immediately included. 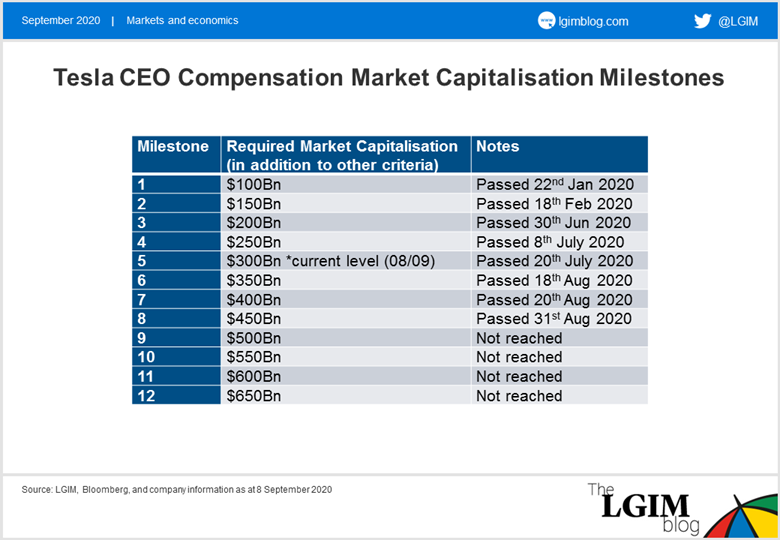 The merits of Tesla as a company and an investment can be – and are – debated, but the broader point is that we shouldn’t think indices are homogenous or interchangeable. Even if an index is tracking something as relatively straightforward and intuitive as US large-caps, its methodology can result in different underlying exposures.

Tesla and the S&P 500 is just one fairly well known example of this; another is whether South Korea is included in emerging-market indices or not.

Leaving a top-10 stock out of a large-cap index isn’t the only way an index can seem to be in ludicrous mode, though. One area that we believe deserves greater scrutiny is the inclusion of fraudulent companies in mainstream indices.

As index managers, we always aim to preserve value for our clients. One way in which we attempt to do this is by committing resources to researching index events, particularly candidates for inclusion or exclusion from an index. As part of these efforts, we proactively seek to protect clients’ assets where possible by conducting deep dives into companies entering benchmarks that have been accused of fraud.

One example from this year concerns GSX Techedu*. GSX is an online education provider based in China, which became eligible for addition to a major emerging-market index in April after its shares gained on the expectation that its online tuition platform would attract users during the lockdown.

Throughout its ascent, however, GSX had faced reports from whistle -blowers and several independent short sellers warning of fake users and inflated earnings.

As part of our due diligence, we investigated further and identified a number of warning signs. Among these were that revenue growth at GSX had been 428% from 2018 to 2019, disconcertingly high and an order of magnitude better than competitors, and that the company had dismissed criticism without providing any evidence to support its own defence.

We therefore concluded that purchasing GSX Techedu shares represented a significant risk to our clients, and underweighted the stock. With the SEC now probing the company, our position remains – with a high degree of conviction – that focusing on long-term value preservation is the correct course of action for clients.

So whether it is a surging supercar or a spluttering stock in an emerging market, when it comes to index investing we believe it is worth looking under the bonnet.

*All references to specific securities are for illustrative purposes only. The above information does not constitute a recommendation to buy or sell any security.

Lawrence is responsible for the portfolio management of LGIM’s Index Plus funds. Lawrence joined LGIM in 2019 from BlackRock where he held the title of Index Plus Portfolio Manager. Lawrence was a Portfolio Manager at BlackRock for 10 years focusing on developed and emerging-market index arbitrage. Prior to that, he spent two years as a Senior Analyst in the Investment Accounting department of Barclays Global Investors. Lawrence holds a BSc in Geology from Durham University (2003) and is a CFA Charterholder. 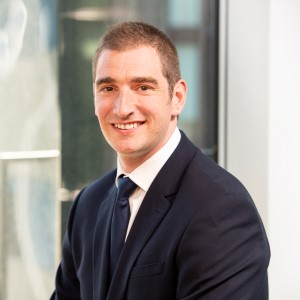 Chris is responsible for lead portfolio management for Global Index Plus and small-cap mandates. Chris joined the team in 2011 having previously worked at LGIM as a performance analyst, specialising in the calculation of performance and attribution of fixed income funds and derivative strategies. Chris graduated from the University of London with an MSc in Economics and holds a BA (hons) in Economics from the University of Leeds as well as the Investment Management Certificate.