Default funds and the veil of ignorance

How can default funds account for their members’ diversity?

The original position, also known as the veil of ignorance, is a thought experiment by philosopher John Rawls to discover the principles that should structure a society. Rawls claims these should be chosen by parties as if they have no knowledge ahead of time of their eventual position in society. Ideally, this forces them to select principles impartially.

That’s (quite) interesting, you might be thinking, but what on earth could this have to do with designing default funds for defined contribution (DC) pensions?

Well, in a default fund, for a given age there is actually a potentially quite heterogeneous (or diverse) range of individuals but pension providers can – by definition – only offer one investment strategy. This is analogous to how a societal structure needs to cater for everyone in that society. Whilst you might hope that individuals for whom the default isn’t really suitable would opt for something else, in practice there will remain a substantial degree of variation in risk preferences, with over 90% of members using the default fund in most DC schemes.

As a (deliberately extreme) example, suppose you have just two members of the same age and with the same pot sizes. One of these, for various reasons, might like to hold 80% in growth assets whereas the other would rather allocate only 20% to growth. You can’t satisfy them both at the same time within the default, but what’s a fair compromise? The impulse may be to say 50% – halfway between 20% and 80% – but as we shall see this isn’t the right answer, at least not if we take the ‘original position’!

To understand what the fair compromise really should be, we can look at something called the ‘expected utility’ of these two members and how this varies with how much they hold in growth assets. Under standard assumptions*, these form inverted-U shapes as you can see in the chart below. 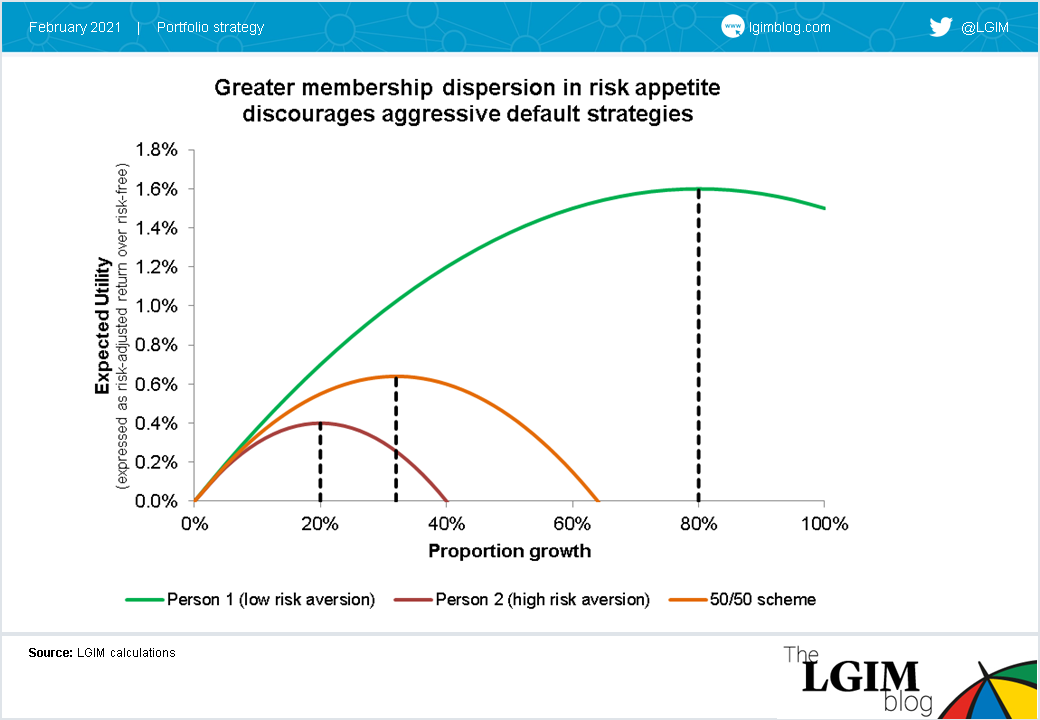 To decide what investment strategy to adopt, we should – following the veil of ignorance – consider ourselves to be 50% likely to be the first member and 50% likely to be the second. In that case, our overall risk-adjusted return follows the orange line shown, which in this case is simply the average height of the red and green lines**. As you can see, this is maximised not at 50% in growth but at a lower number: 32%, in fact***. Essentially it hurts the second member more to be away from 20% growth than it hurts the first member to be away from 80% growth. This results from the concave shapes of the lines.

One intuitive way to think about the asymmetry you get here is that if you were an aggressive investor and you transferred your pension to another provider, you’re unlikely to be upset (at least ex-ante) if your money is temporarily going to be in cash for a month. But imagine the mirror image of this: if you are a cautious investor but for a month your money is put in a high equity strategy, you might not be so relaxed!

Another example of something similar (although the analogy isn’t perfect here either) is in rebalancing strategies. If you are an aggressive investor it makes sense to have quite wide tolerance bands, whereas if you are cautious then the bands should be narrower.

Our analysis supports only one part of the overall puzzle, of course. The harder part is determining appropriate strategies for the different membership profiles (where we also have plenty of thoughts!).

There is also an interesting question of whether the members’ contributions to the overall risk-adjusted return (the orange line in our example) should be ‘democratic’ (each person counts equally) or money-weighted (those with bigger pots influence the answer more), or something else such as service-weighted.

In any case, our research indicates that not allowing for the likely reality of substantial diversity in membership within default funds could lead to overly aggressive investment strategies. Naturally it’s important to be careful applying this in practice and you wouldn’t want to allow extremely risk-averse outliers in the membership to dominate overall strategy, but it does suggest a little bit of caution might be a good idea relative to simplistic weighted averages.