As many defined benefit (DB) schemes mature, there is increasing attention on how they should adapt their investment strategies to their endgames - and rightly so. But there is another, potentially neglected, factor that can be just as important for maximising the chance that all benefits are paid. 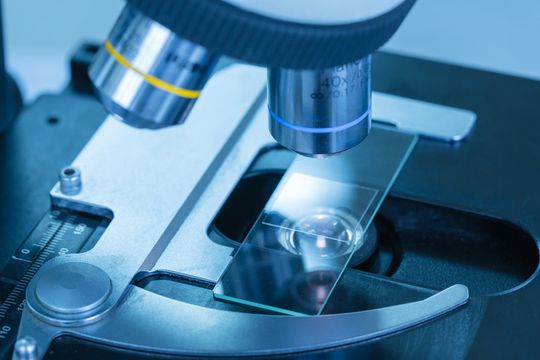 That sounds almost like clickbait – along the lines of ‘this one weird endgame trick’ – so let me clarify immediately! In a word, it’s ‘monitoring’. More specifically, monitoring and the ability to act swiftly on that monitoring by buying out. It might sound a little boring, but it really matters.

The essential idea is that the ability to de-risk rapidly on reaching 100% buyout funding can be highly beneficial. This is because you can avoid the risk of the funding position subsequently falling back below 100% and, ultimately, the risk you don’t pay all benefits promised even though you could have done had you only acted sooner.

That’s intuitive, but how big is this benefit? And how does it compare with potential efficiency boosts from other strategies, such as increasing diversification or refining the cashflow-driven investment (CDI) strategy?

Could a model help? Of course!

If you’re at all familiar with my blogs, you’ll have correctly guessed that some form of model is on its way! I took a well-funded pension scheme in its endgame (95% funded on a buyout basis) and built a model that simulated its buyout funding levels into 1,000 different future scenarios. You can find more detail on the setup in the table at the end of the blog. I then flexed two key variables – monitoring frequency and investment efficiency – and looked at their impacts on the chances of success.*

The graph below summarises my results. 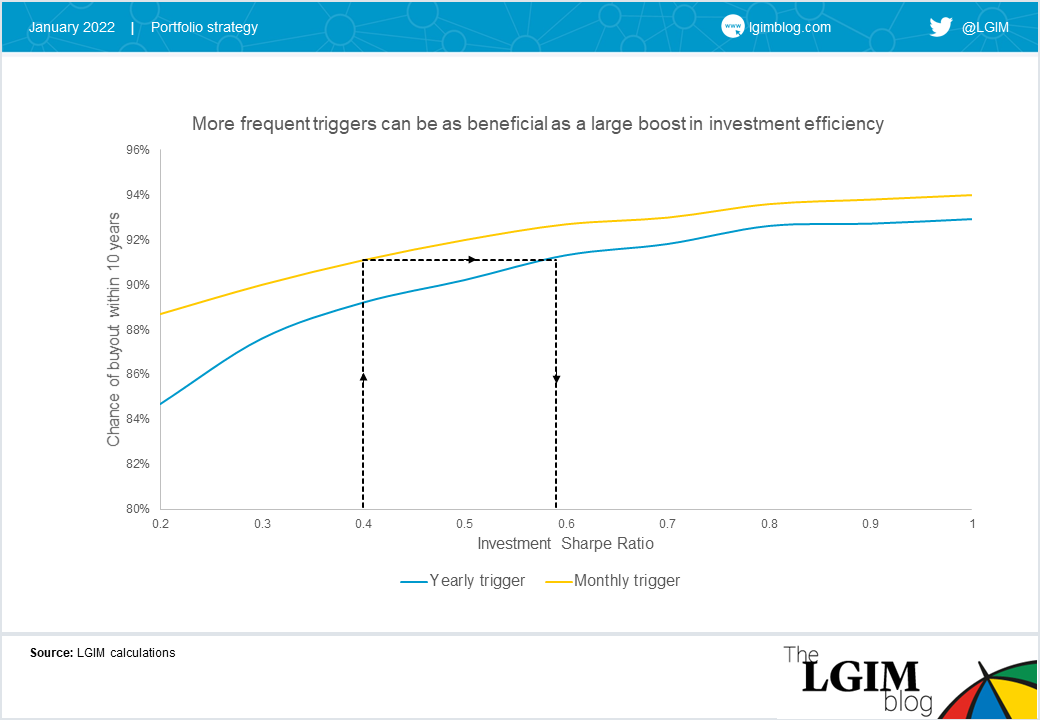 As you can see, moving from yearly to monthly triggers increases the chance of success (the yellow line is higher than the blue), as does increasing investment efficiency (both lines slope up). So far, so good!

Where it gets interesting is how yearly and monthly triggers compare. The dotted black lines give us a concrete example: if the investment Sharpe ratio is 0.4, moving from a yearly to a monthly trigger improves the chance of success by about 2%, which is the difference in heights of the blue and yellow lines.

That might not sound much. However, extending the dotted black line horizontally to the right until it hits the blue line, and then back down to the horizontal axis, we see the investment Sharpe ratio would have had to increase to about 0.6 to achieve the same benefit.

If you start from a Sharpe ratio of 0.2 instead, you find that moving to a monthly trigger is as beneficial to outcomes as (roughly) doubling investment efficiency to 0.4!

Further benefits are possible by increasing the trigger frequency, although the marginal benefits tail off. In the example above, moving from monthly to weekly could boost the chance of success by a further 0.5%.

The upshot? Working your investment strategy harder via diversification, hedging and the appropriate use of CDI obviously matters. But monitoring could also be an increasingly important part of the puzzle in the endgame.

The concept of avoiding surpluses might feel strange, given that surpluses are clearly a good thing: assets exceeding liabilities is obviously better than the reverse! The figure below**, based on just 50 simulations (to avoid overcrowding the picture), illustrates how the surpluses generated under yearly triggers tend to be substantially larger. 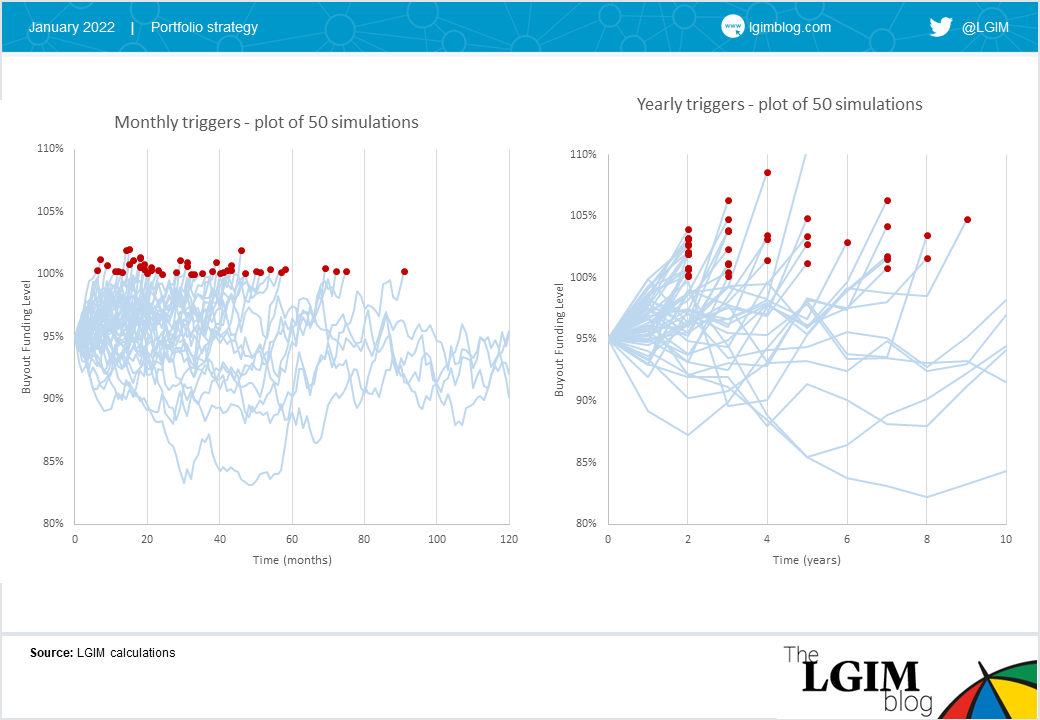 However, there are fewer red dots (representing success) on the right-hand graph than on the left. The key is to remember that the trustees’ primary aim is to pay all promised benefits, not to generate outsized surpluses.

The ability to monitor and transact more quickly could encourage more aggressive strategies when underfunded. Why? Well, as we have seen above, the volatility of the funding position is less of a hazard if full funding can be locked down as soon as it arises.

In practice, however, tracking the buyout funding level precisely and acting swiftly (i.e. transacting quickly with an insurer) are both formidable challenges. An insurer would need up-to-date member data and be able to frequently update the price. The market value of all the scheme’s assets also needs tracking. Finally, governance would need to be in place to act quickly should full funding be reached.

In many cases, trustees will happily buy out with an insurer if they’re told they can. Clearly the appetite for increasing benefits and the level of price dispersion across insurers could affect this trade-off, however. Watch this space for more on this!

To wrap up, the ability to monitor and act quickly can have a surprisingly large kicker to outcomes in the endgame, equivalent to a large increase in investment efficiency. While it could also promote more aggressive investment strategies, credit and CDI are likely to remain important given monitoring challenges and the benefits of alignment with insurers’ strategies.

Model setup – for illustrative purposes only

* For simplicity, success was defined as reaching buyout within 10 years.

** Assumes an investment Sharpe ratio of 0.4.