Bitcoin and crypto-currencies: do you feel lucky?

Discipline and diversification are better bets than speculating on assets with no intrinsic value, in our view.

“You’ve got to ask yourself one question: do I feel lucky?” In answer to Clint Eastwood’s memorable question in Dirty Harry, crypto-currency traders are replying with a resounding ‘yes!’

Bitcoin reached a new all-time high earlier this month. Thus far, it has mostly seemed a private-investor phenomenon, but recently we have seen increased interest from institutions as well. There are many things to like: past returns have been stellar (an annualised return above 100% over the past five years, as the chart illustrates); it has offered some diversifying properties with only a slight positive correlation with risk assets such as equities; and, contrary to many currencies, it has the attraction of limited supply at a time when central banks are printing money. 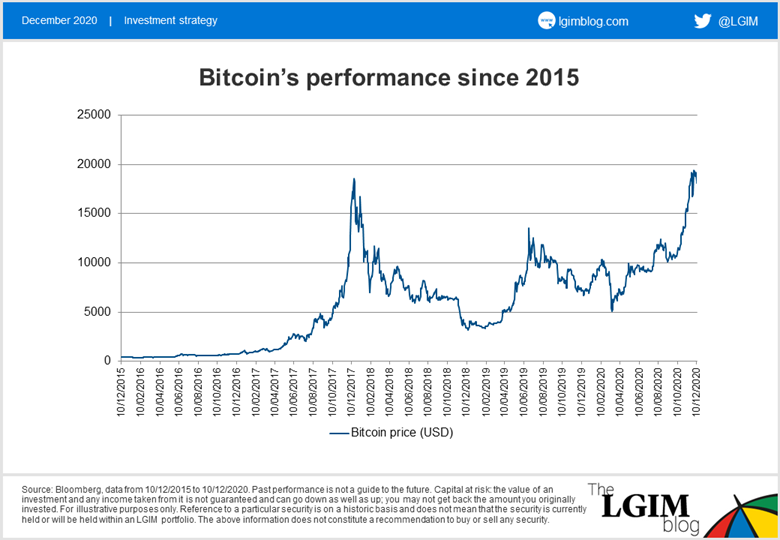 However, there are also plenty of downsides. Bitcoin has no intrinsic value (at least gold has some industrial properties, and even tulip bulbs could yield a beautiful flower); they are not widely recognised or regulated; it takes the energy of a medium-sized nation to mine a bitcoin so it isn’t very environmentally friendly; and it is very expensive and slow to use in day-to-day transactions.

The first is perhaps the most existential risk: bitcoin could become worthless if a more popular or efficient alternative is found. Central banks could well develop their own crypto-currencies, especially if bitcoin and others become too big and interfere with efficient monetary policy.

It could easily be years before the next bitcoin selloff, but we know how this story is likely to end – and not just because the punks faced by Dirty Harry rarely stayed lucky for long.

At the peak of the 17th century tulip trade in Amsterdam, those paying fortunes for a single bulb were surely speculators who understood that tulip prices had no link to bulbs’ intrinsic value and just hoped to sell them to someone else at an even higher price. Many were successful in the year before the crash in 1637; their quick gains were what drew in others and excited pundits. Does that sound familiar?

I also discuss this topic in the short video below.