We worry about sharing popular investment ideas, since the view is probably in the price. But how do we know if a trade is crowded? Positioning information can give us a clue, although it requires careful interpretation.

When building portfolios, we look at other investors' positioning for warnings that lots of them are in the same trade. When positioning is extreme, most people are betting on the same outcome and it gets harder to make money from that idea. Equally, if it all goes wrong then there can be a bit of a stampede for the exit, leading to investors losing money fast.

But understanding positioning is tricky as it's easily misinterpreted. A recent example was in relation to oil. There were claims that most investors were betting oil prices would rise based on the positioning in futures contracts. Then, when prices fell, extreme positioning was widely touted as a key reason why. But as we show below, that conclusion ignored some important information.

A chart of money managers' net future Brent oil positions shows levels higher than at any point since the start of 2011. At first glance, it certainly suggests very extreme positioning. 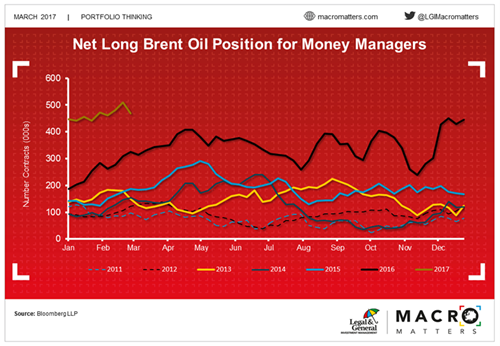 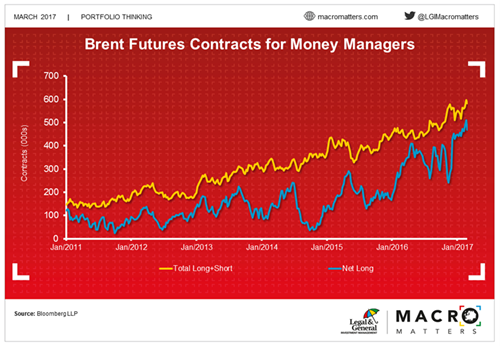 The market is growing and as money managers are always long, their long position has generally grown over time too. So the current situation is to a large degree a function of the growing market. One way of dealing with this issue is to look at a shorter rolling period, for example the preceding two years, so that the impact of the long-term trend is less important to interpreting the positioning indicator. We normally do this using z-scores, which capture the size of the current variation from the average, and volatility, of positions over the two year period.

In this case that leads to the following pattern for 2-year rolling z-scores for Brent oil futures contracts held by money managers. 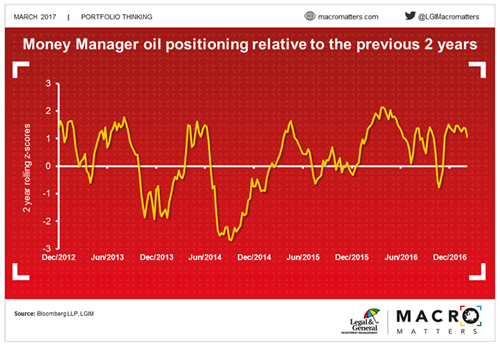 The position now looks a lot less extreme, but still elevated. However, looking more closely at the graph above, there’s a seasonal element to the data too; it tends to be highest in February to April and lowest around November. Taking the average z-scores in each month from 2011-2016 and comparing them with the average for the whole period, z-scores are generally about 0.15 higher in the highest seasonal months than in the lowest. 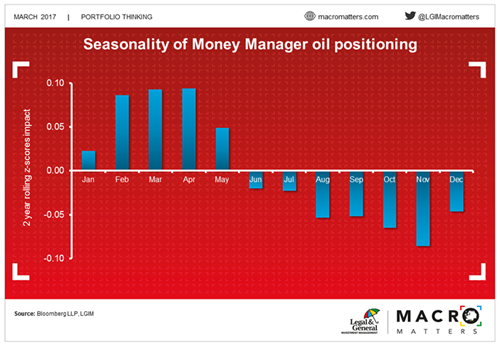 So, why might there be a seasonal pattern? Well, it could just be chance, but in fact it’s because of another set of participants in the futures market. In aggregate, every future position bought has a seller, and so when all participants’ positions are added up, they must sum to zero. The fact that money managers are generally buyers of oil futures means  that someone else is generally a seller. The other parties in this case are merchants; those whose primary reason for buying and selling is to hedge the price of oil as either a product of their business (oil producers) or an input to their business (oil consumers such as airlines).

Producers tend to be more systematic hedgers of oil prices than consumers, because the oil price is more important to their business, which leads to the net merchant position being generally negative. To a great degree, that offsets the money mangers' position over the long-run. It is impossible to know to what degree each group of market participants is driving the overall position in the market, but it's likely the seasonal pattern is driven by merchants. The reason for producers increasing their hedging from November to February could be as simple as following an annual process for hedging future production, or stronger winter demand driving support for prices.

Given the rise in short-dated oil price futures following the OPEC meeting at end November (see Oh Heck OPEC), the clamour for producer-hedging is likely to have been particularly pronounced since then. That all contributed to the net short position for merchants resulting in an inevitably high net long position for money managers, given the need for the sum of all positions to equal zero.

So, overall, there were three material factors that impacted the futures positioning seen in early March this year that were not about investors' market views; (i) a growing market, (ii) seasonality and (iii) the post-OPEC meeting price bounce. Against that backdrop, the talk of “record highs” was overblown and acted as a timely reminder never to assume the position – always dig into it in order to understand the true drivers, in case the headline numbers are misleading.