It turns out, quite a lot. The ability of real assets to retain their inflation-adjusted value over time is hugely valuable. Relatively small differentials in annual returns can compound up into huge differences in outcomes over long periods of time. However, knowing whether an asset is in a bubble comes down to a debate about appropriate discount rates.

Art market records were smashed in late 2017 by the $450 million sale of Leonardo da Vinci’s Salvator Mundi. This is only the 37th time since 1701 that a new record has been set for the world’s most expensive artwork sold at auction.

Does this price constitute the latest example of bubble-like conditions in the economy and financial markets, or can we justify the eye-watering valuation?

Let’s start with the case for the prosecution

The same painting sold for $127 million in 2013. Can we really rationalise paying nearly three times the price for the same piece of art just four years later? At $150,000 per square centimetre it is one seriously expensive piece of wall-covering.

The chart below shows the world record art price over time. It is an updated version of a chart first produced by three researchers at Yale University. Even on a log scale, it makes the returns on Bitcoin appear tepid. 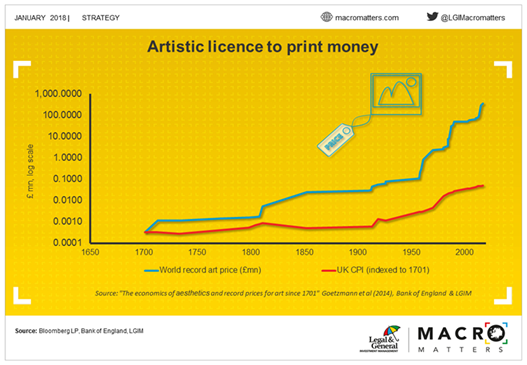 Highlighting the boom and bust cycle, the record set just before the Great Depression (£78,000 for Thomas Lawrence’s Pinkie in 1926) went unchallenged for the subsequent 31 years. Not every new record is a sign that the bust is around the corner, but we have been warned.

What about the case for the defence?

Economists would point out that the nominal price of anything is likely to drift up over long periods of time given the impact of inflation.

The rate of goods & services inflation has been outstripped by the rate of art price inflation. Whilst the general art price level has around 150 times in the last 317 years, the record art price has increased over a million times. 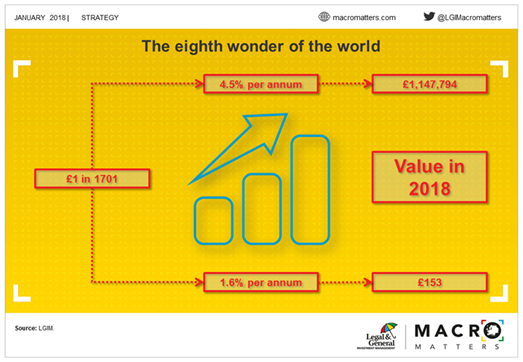 But this huge differential is an excellent example of the magic of compounding. Inflation has run at an average rate of 1.6% since 1701. Art prices (or at least world record art prices) have grown by 4.5% per annum. Compounded over 317 years, that relatively small annual differential implies an enormous difference in the cumulative price change.

As Albert Einstein is reported to have observed:

“Compound interest is the eighth wonder of the world. He who understands it, earns it. He who doesn’t, pays it”

Is a 3% inflation-adjusted return “reasonable”? It depends on whether we think of art as a good to be consumed or an investment to accrue returns.

A piece of art doesn’t directly generate any cashflows to its owner. There is no equivalent to the regular flow of coupons and dividends accruing to owners of bonds and equities. However, an artwork’s value can be monetised by charging people to come and look at it. Thought of in that way, it is not so different from a financial asset and we can apply a little discounted cashflow analysis.

It was recently revealed that the government of Abu Dhabi bought the painting to hang in their new Louvre which was opened in November. Looking at some of the numbers for the Paris Louvre perhaps reveals the thinking behind the purchase.

Entry to the Louvre in Paris costs €9. Over seven million people shuffled through its doors last year, bringing in revenue of €68 million.

Let’s make the assumption that those revenues will grow at 2% per annum (in line with the ECB’s inflation target). The Louvre is owned by the French government which can issue long-dated debt at 2% (or below). Discounting the revenues at a zero real interest rate implies a net present value of nearly €7 billion.

By charging people to come and look at it, art can be monetised

If even 10% of those visitors are coming to see the Mona Lisa, then $450 million (i.e. slightly less than €400 million) is pretty easy to justify for a comparable piece.

However, as with everything in finance, the valuation is predicated on the discount rate applied to the cashflows. Increase the discount rates (because bond yields rise), and the present value of long-dated assets plummets. You don’t get many better examples of a long-dated asset than something that was produced in the 16th century and is still around today.

Is the art market in a bubble that is destined to go pop? In an echo of the debate around equity valuations, it ultimately depends on what you think about bond yields.