French anthropologist Claude Levi-Strauss once said that "the wise man doesn't give the right answers, he poses the right questions". Having accepted that we can't predict the path of inflation with confidence, what are the questions we can ask ourselves? This is part two in a series exploring the asset-allocation response to inflation, with more to come on fixed income, equities and currency. 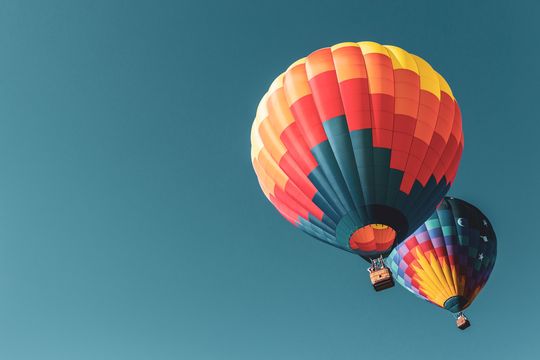 We believe the inflation debate should revolve around three concepts, each with their own implications:

Despite central banks’ poor forecasting record when it comes to inflation, they still believe they know how inflation works. They also believe it is controllable, mainly through a policy mix of interest rates and quantitative easing or tightening. After allowing for an economic recovery post the deep COVID-19 shock, central banks made a hawkish pivot in late 2021. They have revealed they are ready to act on inflation, with the Bank of England one of the first major central banks to raise rates, and the European Central Bank confirming its hawkish stance even amid high levels of uncertainty regarding growth brought on by the Russian invasion of Ukraine and the resulting energy crunch in Europe.

The first thing control means for central banks is quantitative tightening, with all major central banks except the Bank of Japan now committing to winding down asset purchases. That means lower liquidity. For us, that translates into another reason to prefer equities over credit, as the liquidity premium is one of the main elements of credit spreads.

Second, we think control comes at a cost, with an uncomfortable trade-off between suppressing inflation and dampening growth. This in turn puts pressure on the relationship between equities and bonds. The current inflation environment is threatening to break the longstanding negative correlation between equities and bonds that acts as a cornerstone of many multi-asset portfolios.

From 2010 to 2020, that correlation stood at -0.5, meaning government bonds went up in value when equities fell. Since the start of 2021, it has been around 0 and is turning positive, more reminiscent of the high-inflation environments seen in the 1950s, 70s and 90s. On recent days when equities have fallen significantly, bonds have not consistently helped and have often lost money as well. We believe the correlation and diversification benefits of a traditional equity/bond portfolio have been temporarily compromised. 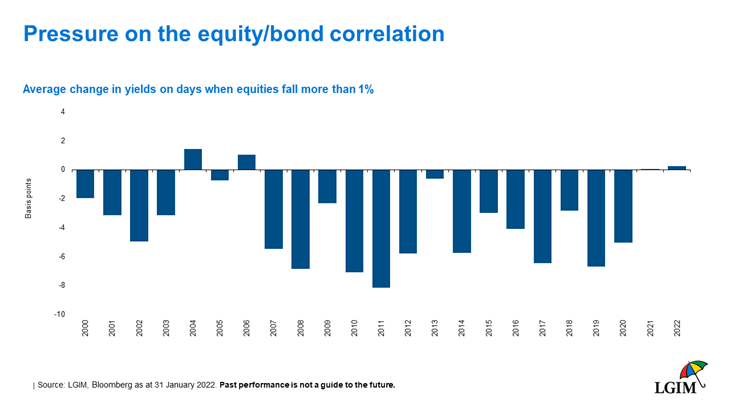 That leads us to question the role of sovereign bonds in our portfolios, with our conclusion being to reduce but not remove sovereign bonds. Chris Jeffery will explain why in the next blog.

Today’s inflation story is truly global in nature. As the world recovers from the pandemic, we have been suffering from a ferocious inflationary cocktail of supply-chain disruptions from the lingering impacts of COVID-19, rebounding global demand fuelled by consumers unwinding excess savings, and now a commodity squeeze as a knock-on effect of Russia’s invasion of Ukraine.

There may be some additional reasons for the UK to be even more vulnerable to inflation. If we take a step back, the UK has a long history of high inflation compared with the rest of the developed world. Sterling is also relatively susceptible to losing value in global growth shocks. We think that calls for a strategic allocation to foreign currency.

When facing a domestic inflation shock, investors generally suffer a knock to their spending power relative to the rest of the world, as the local currency will tend to weaken and foreign currencies will appreciate. By holding a strategic allocation to foreign currency, investors can be compensated for the inflation shock they have suffered. This was shown to be particularly effective in 2016 as the Brexit vote immediately translated into a perceived inflation shock for the UK. The pound fell by over 10% in two days while holding overseas currencies generated positive returns, offering a one-time offset for higher future expected inflation for UK-based investors.

The amount of overseas currency to hold depends on the inflation-fighting credibility of the domestic policymakers, and the riskiness of the currency. More defensive domestic currencies like the euro, Japanese yen or the US dollar will generally require less strategic exposure to foreign currency for this purpose.

It can be easy to be swept up in the inflationary narrative and become overly focused on one risk facing portfolios, but it is important not to lose sight of other risks and – most importantly – the investment horizon. Most clients seek long-term growth objectives from their multi-asset portfolios.

To that end, we believe there is a need to balance the allocations to assets that will hedge surprise short-term inflation versus inflation protection, which can insulate you from corrosive effect of inflation on purchasing power in the long run.

Commodities and inflation-linked bonds may give the best short-term results and show the greatest sensitivity to changing inflation, but they have historically been a terrible store of long-term value with poor expected returns. Modest allocations provide potential diversification and hedging benefits against immediate inflation risk, but they are not a panacea and could be detrimental to meeting long-term objectives. 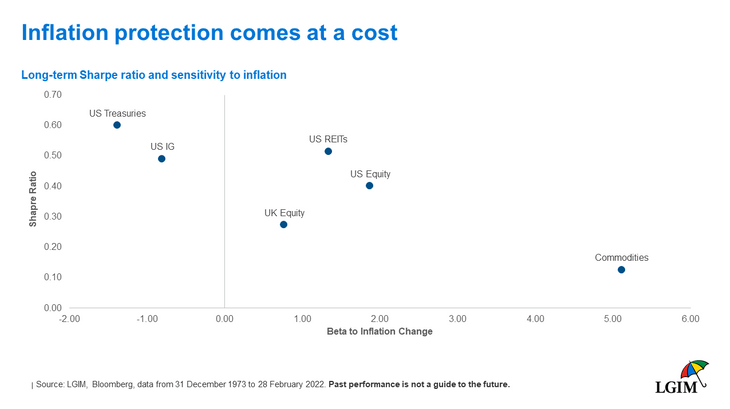 Equities typically have the healthiest levels of returns when inflation is at moderate levels or rising from periods of recession and deflationary risk. Company earnings tend to rise with inflation, and so this supports returns in such periods even if valuation multiples often decline in such periods.

Nonetheless, equities still tend to deliver positive real returns in high inflation periods and give the best chance of beating inflation in the long run, in our view. Should an inflationary spiral emerge, navigating the inevitable recession will be more important than the nuances of inflation linkages in the asset class.

We also favour structural allocations to listed alternatives with explicit or implicit linkages to inflation, such as infrastructure, real estate investment trusts (REITs) and forestry stocks given their real asset land values. We believe there are fundamental reasons to like these assets in inflationary environments. For example, 70% of assets owned by listed infrastructure companies have effective means to pass on higher costs to customers through regulation or contracts.

I don’t know if Claude Levi-Strauss would deem these questions as right enough to make me a wise man, but we still think they make for more structured responses to inflation in multi-asset portfolios than jumping on the inflation-forecasting train without knowing its destination.

In the next blog in this series, rates strategist Chris Jeffery will delve deeper into sovereign bonds and why we still hold them despite the threat of inflation.

Unless otherwise stated, information is sourced from LGIM analysis as at 16 March 2022.