All about that base

When making decisions, data on similar past decisions and their outcomes provide a useful starting point as a ‘base rate’. Too often though people ignore them or give them too little weight. Base rates of the historic performance of active fund managers provide an insight into the potential benefits and costs of choosing them in different asset classes.

Daniel Kahneman and Amos Tversky pioneered behavioural psychology, starting in the 1970s and dedicating their lives to how human minds really work. They are heroes of mine, and since reading their findings I’ve been fascinated by the subject.

Amos Tversky sadly died in 1996, but Kahneman has built on their work and in 2002 was awarded the Nobel Memorial Prize in Economic Sciences. In his book, Thinking, Fast and Slow, he focused a lot on why people ignore the outcomes from similar decisions historically, known as base rates, given that they provide a robust starting point for the likelihood of future success. He put it down to subconscious laziness, where the brain doesn’t like putting in the extra effort required to find and apply them.

When investing, we believe the use of base rates is essential. For example, when deciding whether to invest actively or passively in particular asset classes, as well as what fee is acceptable for doing so, they provide an indication of the likelihood of success for the average investor. Individual investors can then adjust that likelihood where they feel they have a genuine edge over their peers.

Within the team, we don’t believe there’s one 'right way' of investing and we invest in both active and index-tracking funds across both equities and bonds. Different investors have different objectives and also different beliefs, such as the benefits of active management and their own ability to select the right investments or managers. However, we do believe base rates provide a necessary starting point for all investors, to help mitigate overconfidence and avoid complete miscalibration of the likelihood of success.

At a conference in 2015, I asked over a hundred professional investors what they thought was the likelihood of them successfully selecting an active European Equity manager. Around three quarters of them rated their chances better than 50%. It was a great example of base rate neglect given that only around 20% of funds had outperformed over the previous five years. 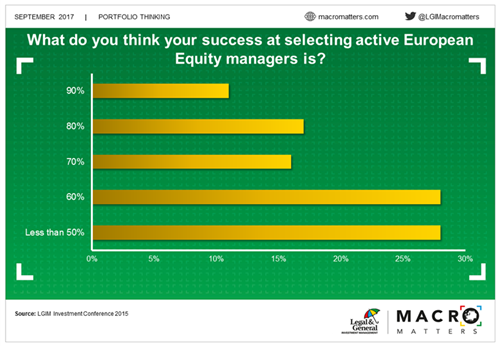 Beware the bogus base rate

Having said all of that, the base rates need to be sufficiently applicable to the situation in question. If for example, as asset allocators, we want to buy a UK equity fund but also specifically target a high level of income from it, then base rates just based on manager performance versus a standard index would be misleading; they’d ignore the high income requirement and so would not be well matched to our aim.

As more funds become objective orientated and not focused on outperforming an index, then inevitably base rates become more complex to structure as standard indices become less relevant. Too often, when people quote historical performance stats of active managers they aren't careful enough about how applicable those are to the current situation.

Collecting base rate data for manager success is complex, because of issues like survivorship bias where poorly performing funds are closed or merged with other funds and disappear from the population; in turn that biases up the average historical performance of the funds still in existence but of course doesn’t change that lots of people chose those now defunct, underperforming funds and suffered poor outcomes.

Collecting base rate data for manager success is complex, because of issues like survivorship bias

Fortunately the S&P SPIVA reports take snapshots through time to try to limit the survivorship bias impact by assuming that any funds that shut in a period were underperforming (as it is overwhelmingly underperforming funds that are shut or merged).

Fees are generally higher for retail investors than for wholesale and institutional ones, reflecting that individual investors have less buying power. Therefore using the SPIVA classifications, fees have a larger impact on mutual fund performance because they include retail investors. 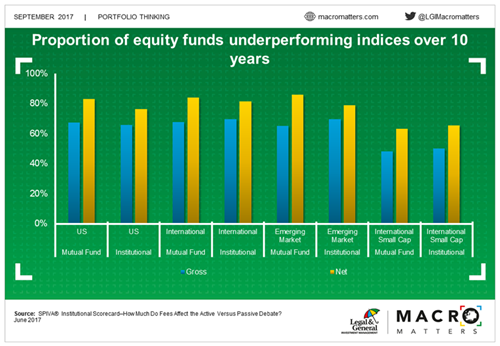 The two other main reasons why more than 50% of active funds tend to underperform are other costs (eg. administration fees) and trading costs of buying and selling individual equities. The impact on outcomes from fees and other factors seem to be similar historically.

As a team, we focus on net performance when assessing managers so that it’s reflective of the returns that might be achievable for our end investors.

Net historical returns as base rates

Over longer periods, a similar pattern holds for net returns for equities across different time periods. However, fee compression is a recognised trend in asset management and so it would be misleading to use historic net performance as the base rate; instead we’d adjust it upwards to allow for lower expected fees going forwards, lowering the hurdle for finding the right active manager. 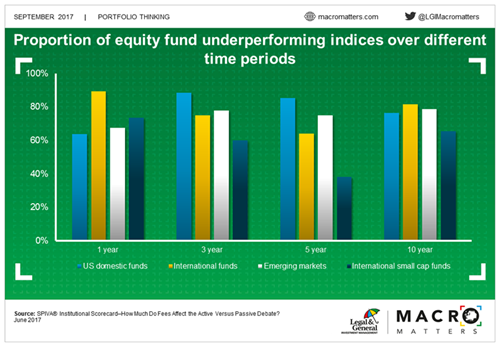 Given the frequent, but often inaccurate, comment that the majority of active managers will underperform in a given universe in any asset class, then there are apparent puzzles in the SPIVA data. For example, why small cap equity managers seem to fare better than their large cap peers and also why certain fixed income statistics are more promising for active managers than for most equity markets.

In two future blogs I’ll tackle those conundrums, but the fact they exist is an important reminder to only apply base rates appropriately. Otherwise they can turn from an essential tool into a dangerous trap.