A year ago, we extended our voting policy on female representation on boards to Japan; in this blog post, we explain why the issue matters.

A lot has changed in the year since I wrote about our decision to escalate our voting policies in Japan by moving to vote against all companies in the large-cap TOPIX 100 index that do not have at least one woman on their board. Our commitment to engage companies forcefully on this critical issue, however, remains steadfast – which is why we are updating our voting policy again this year.

We have been saying for over a decade that diversity of perspectives and opinions is essential for good decision making in any group. As well as seeming like common sense for many of us, numerous studies[1] back this up with correlations indicating that companies with diverse leadership show financial outperformance driven by superior growth and innovation as well as lower risk.

Arguably, fostering such cognitive diversity should be a particular priority in Japan, where many boards and leadership teams are homogenous, usually dominated by older Japanese men.

In addition, low levels of labour mobility[2] in the local market can also lead to a lack of diversity of thought and experience, exacerbating the risk of groupthink.

The combination of these factors makes it all the more important for Japanese companies to embrace diversity so that management is challenged by the views of different individuals and independent outsiders.

Furthermore, we would note that diversity is not only a question of success for Japanese companies; it is a question of survival. Japan’s population peaked in 2008 and those aged 65 years or older now account for more than a quarter of the total population. One source even predicts that by 2030 the nation will face a deficit of nearly 6.5 million workers. Japanese businesses simply have to bring in new people.

With that said, how does Japan fare in international comparisons of corporate gender equality? Unfortunately, the Economist’s latest glass ceiling index shows Japan far below the OECD average in 28th place; South Korea is the only country in the survey with a lower score.

Similarly, it is perhaps not a surprise that Japan stands 120th out of 156 countries benchmarked in the World Economic Forum’s 2021 Global Gender Gap Report. However, people may not know that Japan actually ranked considerably higher – 79th out of 115 – in the Forum’s first such report in 2006. It is disappointing that Japan has regressed in this manner.

There is at least some official commitment to improving matters. Japan’s Equal Employment Opportunity Law of 1985 first prohibited gender discrimination in the workplace, while more recently the government[3] and the Japan Business Federation (Keidanren)[4] have set targets that aim to increase the ratio of women in leadership positions to 30%. The Japanese Corporate Governance Code also includes principles regarding boardroom diversity. Over the years, diversity has shifted from a moral issue to one of business and economic growth.

And indeed, there have been some signs of progress. Although a majority of listed companies in Japan have yet to appoint a woman at the board level[5], the number of all-male boards[6] in the TOPIX 100 has decreased from 37 in 2017 to 11 in 2020; the number of such companies in the TOPIX Mid 400 also declined from 223 to 111 over the same period.[7]

These steps forward are welcome but should not make us complacent. For example, we are concerned that of the companies in the TOPIX 500 that have appointed a female director, the majority have stopped there (‘one and done’) with just a sole woman on the board.[8] 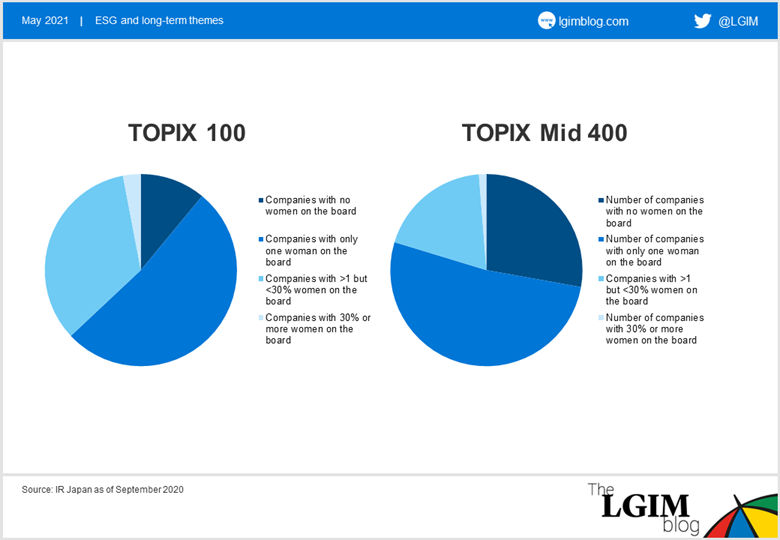 Research suggests that 30% is the tipping point from which minorities can influence group dynamics, which is why we consider 30% to be a minimum target for female representation on the board. Our focus on building a diverse pipeline of talent means that this minimum threshold applies across various seniorities of the workforce. However, only 3% of TOPIX 100 and 1.3% of TOPIX Mid 400 companies have reached the ‘critical mass’ of 30% female representation on their boards.[9]

The implications of such lack of diversity are a source of deep concern for long-term investors like LGIM.

In my next blog post, I will explore why Japan is in this situation, and what we are doing as shareholders to improve gender diversity in the country’s boardrooms – including why we are updating our voting policy again this year.

[3] In 2003, the Japanese government announced a “2020/30” target that aimed to increase the ratio of women in leadership positions to 30% by 2020. This was highly unsuccessful, and in December 2020 the Cabinet Office approved a new five-year policy which essentially extended the target date to achieve this by a maximum of 10 years.

[4] The Keidanren announced in November as part of its growth strategy an objective of 30% female representation at the board and executive levels of major companies by 2030.

[6] We do not count statutory auditors as board members 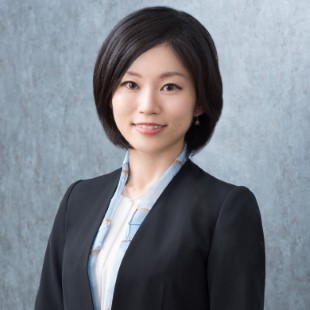