Total wipeout: what can Ottawa teach us about Westminster

Opinion polls suggest a 'total wipeout' for the Conservative and Labour parties if a general election was held tomorrow; the 1993 Canadian Federal election offers some clues about what that would mean for 'outsider' political parties – and sterling.

We therefore need to consider recent polling data with a huge dollop of caution. However, it is worth pointing out how spectacularly badly the two main political parties have done since the European Parliament elections on 23rd May.

The two-party vote share has dropped to just 40% in recent polling. The blue line in the chart below is the equivalent vote share in the monthly average of UK opinion polls since 1945, taken from Mark Pack’s Pollbase database. The red dots are the same two-party vote share at general elections. There is no post-war precedent for the two main parties polling consistently below 50% between them. 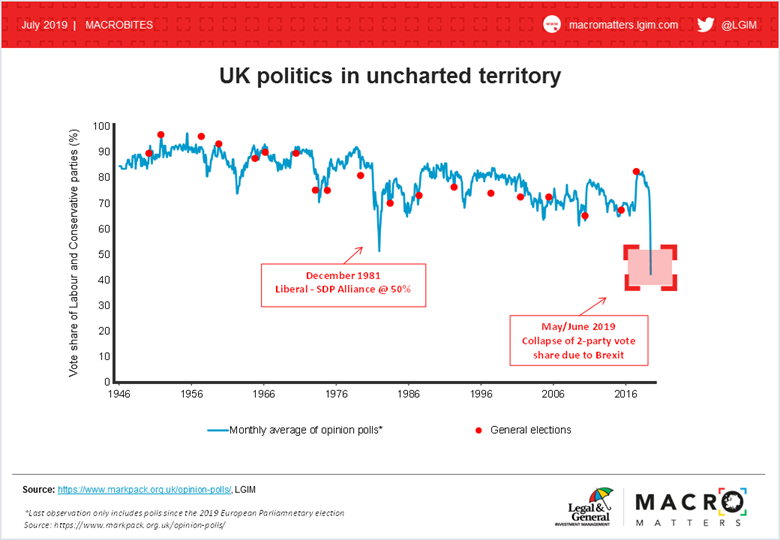 In terms of general-election results, you have to go back to 1918 to find an occasion when Labour and the Conservative party pulled in less than 50% of the vote.

The only vague parallel is the rise of the SDP-Liberal Alliance in the early 1980s, which peaked very briefly at 50% of the vote share but only won 23 out of the 650 seats in the 1983 general election. However, it is not a foregone conclusion that these political earthquakes disappear with a whimper.

The potential shake-up in the composition of parliament with an election under these conditions should not be underestimated given the non-linearities inherent in a first-past-the-post system. I’ve been reading up on the 1993 Canadian election, when the governing Progressive Conservative party fell from 156 out of 295 seats to just 2 despite leading in the polls six weeks before the election.

It’s worth pausing to reflect on that result. The Progressive Conservatives were the mainstream party of the centre right, founded over 50 years previously. They went from first (in 1988) to fifth (in 1993). Having been in government for nine years, they lost 99% of their seats. It wasn’t a political earthquake; it was a political supernova.

What’s the lesson here? UK opinion polls currently show a four-way tussle between the Brexit party, the Conservatives, Labour, and the Liberal Democrats. A first-past-the-post system can throw up highly unusual results in that environment: small differences in vote share can translate into wild differences in the share of seats.

Consistent with that, bookmakers are pricing the probability of a third party becoming the largest force in Westminster after the next general election at 15%. To put that in context, that is marginally higher than the implied probability of anyone other than Liverpool or Manchester City winning the 2019/20 Premier League. Spurs, Arsenal and Manchester United fans will try to convince you that the Premier League is more than a two-horse race. If they are even half right, Westminster politics is wide open in a way that has not been true since the start of the 20th century. As Leicester City's victory in 2015/16 showed us, we have to keep our eyes and minds open to seemingly outlandish results.

Why should we care? Most obviously, there is a currency angle to think about: a higher dispersion of potential political outcomes should drive a higher risk premium in sterling-denominated assets. Broadly speaking, our funds have enjoyed a significant tailwind from holding non-sterling assets as these political risks have escalated. The question we constantly need to be asking is whether we have now hit 'peak political uncertainty'. Our judgement is that we are now reaching that point and GBP-based investors should consider scaling back their non-sterling risks.