The gender gap in retirement savings doesn't happen overnight: it starts to build even in the early days of women’s careers. Is this the inevitable consequence of things we can’t change or is it time for pension providers, employers and policymakers to intervene?

Despite attempts in recent years to address gender-based inequalities in the workplace, one area that remains resolutely stuck in a narrative of male superiority over females is in the size of their pension pots – even in younger age groups.

At Legal & General, our research into the retirement choices of our 4.5 million pension scheme members in 20211 showed that the difference in the size of male and female retirement savings starts very early in career paths. From age 20 to 29, more men than women join their company pension scheme and of those who do, differences in pot sizes between males and females first start to appear even in these early days. By the time scheme members reach the 30 to 39 age group, the average size of a woman’s pension pot is 83% that of a man’s. And the gap never closes.

One reason for this might seem obvious considering the overlap between the emergence of a widening pension savings gap and the average age of childbearing and child-rearing. But understanding the likely reasons why disparities emerge shouldn’t make us comfortable about accepting them as a fait accompli.

The long-term implications for women of taking time out from paying into a pension plan are stark: our research suggests that taking career breaks, part-time work or lower paid roles means that at retirement, the average pension pot for women is half the size of men’s despite having worked in similar roles.

Men’s pension pots are bigger at every stage

Men have disproportionately more in their pots throughout their entire pension saving journey. For instance, at the beginning of 2022, men accounted for just over half (54%) of our scheme membership but had 66% of assets under management (AUM). 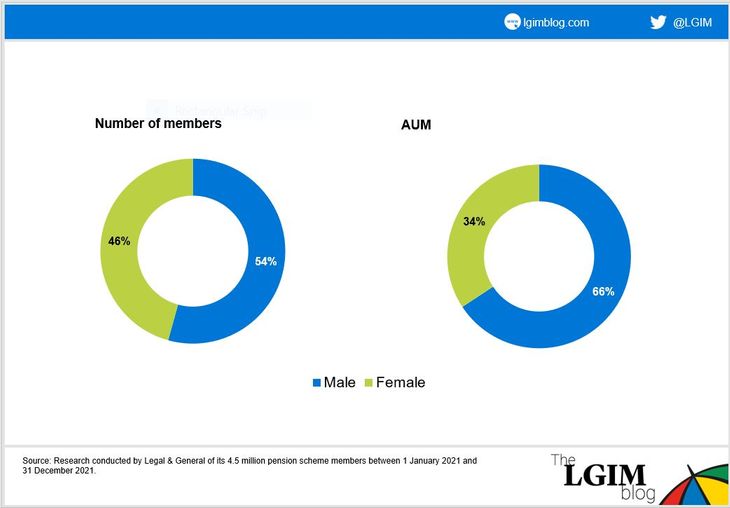 Men’s pots are also larger regardless of their retirement choices. In terms of those trends in the way retirees opt to take their money, we found that the genders were pretty much aligned. Overall, the option of taking a cash lump sum remains the most popular choice for both men and women. This only differs for those with large pot sizes (classified as being more than £150,000) where drawdown is the preferred option for both men and women. 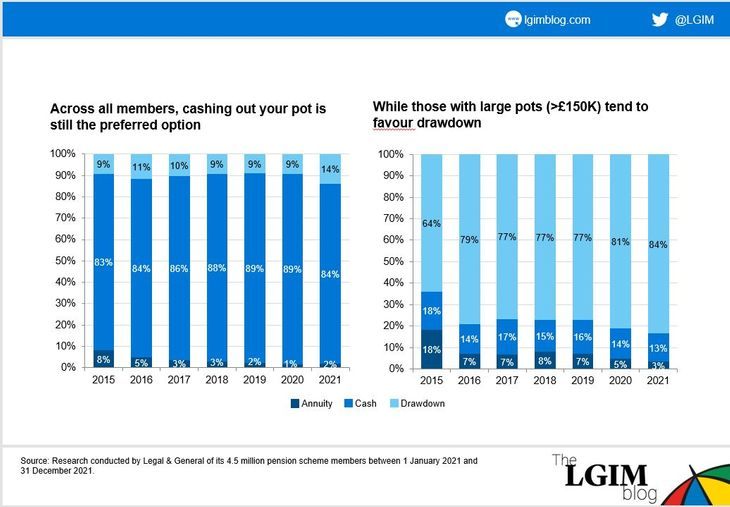 So, while trends show no discernible difference between the way males and females choose to take their retirement savings, the picture remains stubbornly uneven for the size of their pension pots.

Our 2021 research did spot a slight closing of the gap compared with 2020’s figures (the gap was 54% last year, as opposed to 56% the year before) which we hope signals the start of a positive trend. But we believe the situation won’t resolve any time soon without intervention.

Reasons for the gap are many and include:

Taking action to tackle the gap

Among the many actions that pension providers such as Legal & General would like to see being investigated and addressed with the relevant authorities are:

Women appear to pay a penalty for taking career breaks to focus on domestic caring responsibilities, or for downgrading their professional (and financial) aspirations so they can accommodate home-based tasks that might be harder to combine with more senior roles. There also appears to be a quiet societal acceptance that these are the consequences of personal decisions that make the gender pension gap inevitable and, therefore, all right.

But should we just accept it? The potential for large swathes of people to face relative or actual impoverishment in later life has implications for the communities in which they live. And is it fair to be sanguine about women having disproportionately worse outcomes at retirement despite having made joint decisions over domestic arrangements with male partners who don’t bear the financial brunt of them? Plus, there are wider questions here about pension equality in general because low-pay and part-time working don’t only affect women.

We hope that the work of initiatives such as the Legal & General Pension Equalities Taskforce, set up in 2021, will benefit all groups who are on course to be affected by the long-term impact on their retirement incomes of ‘choices’ they may make to accommodate circumstances over which they have little or no control, such as a difficult menopause or managing a disability.

We’ll be working with government, regulators and trade bodies to establish priority actions, and bringing pension providers and industry representatives together to collaborate on research and representation. We also hope to work with employers to help find solutions to issues which don’t only affect around half of the population directly but have implications for so many more.

The value of any investment and any income taken from it is not guaranteed and can go down as well as up, and investors may get back less than the amount originally invested.

1Research was conducted by Legal & General of its 4.5 million scheme members* including our own colleagues in Legal & General’s company scheme, between 1 January 2021 and 31 December 2021. *LGIM 2022.

2Office for National Statistics (ONS), 2021: Gender pay gap among all employees in the UK.

4Mercer Australia Gender differences in pension outcomes, 2021: 23% of women and 13% of men employed in the UK do not meet the minimum income requirement to join a pension plan.

5OECD, 2016: Families in UK spend a third of household income on childcare, compared to OECD average of 13%.

6Merrill Lynch and Age Wave study, 2018: Only about half (52%) of women say they are confident in managing investments as opposed to 68% of men.

7LGIM 01/2021 press release: Women are significantly more likely to waive their rights to a partner’s pension as part of their divorce (28% women vs 19% men).

8Daily Mail 12/2021: Andy Briggs, the Government’s Business Champion for Older Workers, said that almost one million women have left employment because of the menopause.

Stuart is Co-Head of DC. His responsibilities include client management, client proposition, relationship management strategy and managing the support for the Legal & General Mastertrust and IGC, which includes chairing the Mastertrust Scheme Strategist Forum. Stuart has been with Legal & General for over 20 years, fulfilling a number of roles within the bundled DC business. 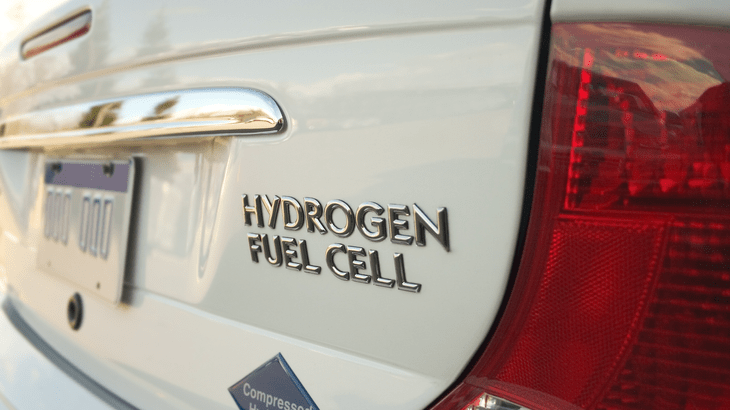 In the second of a two-part blog on the hydrogen economy, we look at the economics of hydrogen us...
By John DalyCharlie Miller
09 Aug 2022
3 min read 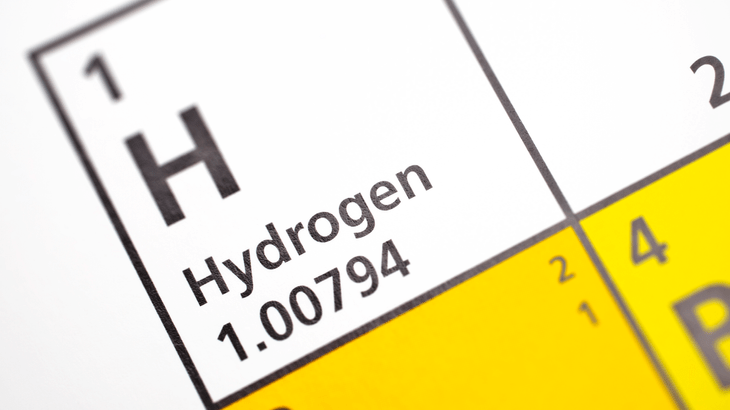 In the first of a two-part blog on the hydrogen economy, we look at the economics of production,...
By John DalyCharlie Miller
05 Aug 2022
3 min read 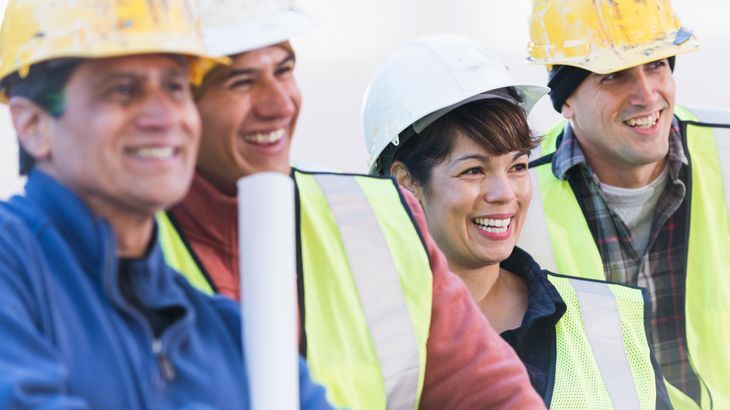 The rise of ‘S’ in ESG investing

After years of relative obscurity, the investment value of measuring a company's response to soci...
By Matthew Courtnell
27 Jul 2022
5 min read