We believe responsible investors need to pay greater attention to agriculture, and urge the EU Taxonomy to go further on this vital sector.

During the COP26 negotiations, there were reports that an important proposal for the EU Taxonomy was circulating among policymakers. The paper, titled the ‘Complementary climate delegated act’, proposes a number of criteria for agriculture that had been omitted from the delegated act for climate change mitigation and adaptation published in April this year.

Much of the response to the paper has focused on the gas and nuclear sector, including comments from our friends at the UN Principles for Responsible Investment and the Net Zero Asset Owner Alliance. However, and rather worryingly, less attention has been drawn to the suggested proposals for agriculture.

To put the significance of agriculture in context, the sector accounts for a third of global greenhouse gas (GHG) emissions and 10% of the EU’s GHG emissions. It also accounts for over half of the EU’s methane emissions – the second biggest contributor to climate change, with a warming potential 84 times that of CO2. Put simply, the sector plays a key role in the transition if we are to limit global warming to 1.5°C by 2050.

While the paper suggests the Commission use similar criteria for agriculture as proposed in March 2021, it also suggests important concessions. Specifically, it proposes that economic activities will ‘automatically’ qualify if:

i. They fall under the EU’s Common Agricultural Policy (CAP) “eco-schemes and agri-environmental and climate measures”, or

ii. The production system is organic.

A glaring issue with these proposals is that they intend to qualify CAP eco-schemes and organic agriculture without considering the principle of ‘do no significant harm’. The proposals also allow for a qualification loophole, risking weaker criteria being agreed in a CAP reform or on organic farming. Given that organic farming can result in environmental trade-offs, and that CAP reforms have not been hailed for their ambition on tackling climate issues, this is a real risk.

Finally, CAP schemes – the EU’s mechanism for agricultural subsidies – will be decided at the national level. Should EU Taxonomy criteria defer to national CAP implementation, it would result in the same activities being considered sustainable in some countries and not sustainable in others, distorting markets and undermining investors’ trust.

In October, a group of investors, investor representatives and advisers representing $3.5 trillion in assets (including LGIM) expressed concerns over certain elements of the Taxonomy to the EU Commission. The letter highlights the importance of a science-based Taxonomy and of the role of the agricultural sector within it. The key points are listed in the table below. 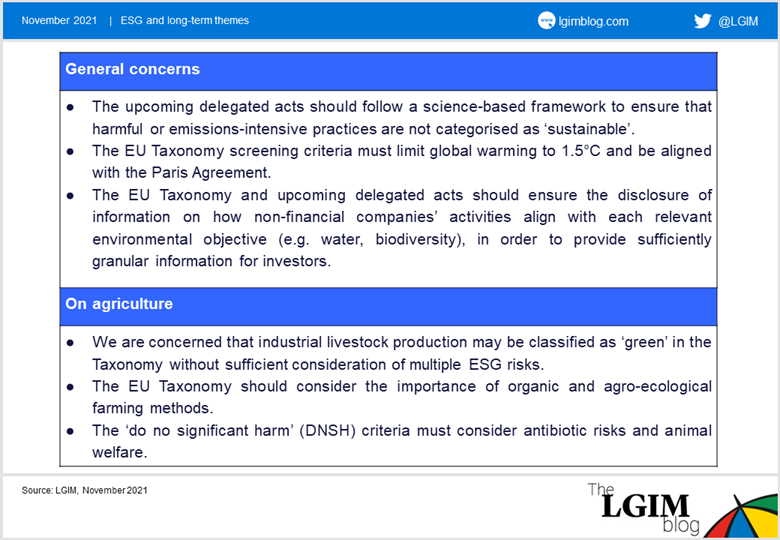 The full text of the letter is available here

This is certainly not the first time that we have voiced our concern. In March, we wrote to the Commission with recommendations for how Europe can align CAP reforms with the Paris Agreement. In July, the European Court of Auditors found virtually none of the CAP funds attributed to climate action could be shown to be good for the climate.

Whilst the recent proposal may appear to improve EU policy alignment, we believe it would undermine the robustness of the EU Taxonomy if approved and impede investors’ ability to identify and direct capital towards environmentally sustainable activities. In turn, investors would not want to build their investment decision-making on a tool whose scientific credibility is tarnished. This must be avoided by ensuring that the EU Taxonomy uses robust, scientific and evidence-based criteria.

This was co-authored by Helena Wright and Eline Reintjes of FAIRR, an investor network focusing on ESG risks in the global food sector.

Alexander joined in 2019 and leads LGIM’s ESG policy engagement across markets. Prior to this, he helped establish an impact fund that uses blended finance to invest in emerging markets. Before that, Alexander negotiated blended finance investments at the European Bank for Reconstruction and Development (EBRD) to support sustainable economic growth across Eastern Europe, Central Asia, and North Africa. He has held roles advising governments on alternative finance and established a nuclear safeguards organisation. Alexander holds a BSc in Politics and International Relations from the University of Southampton, and further education at LSE, ICSA, CISL, and Birkbeck.